If Apple (NASDAQ:AAPL) completes a rumored $3.2 billion deal to acquire Beats Electronics, the iPhone-maker will hold a huge share of the headphone market and a commanding piece of the teenager audience -- a group that has fallen in love with the marketing behind Beats and the idea of headphones as fashion statement.

A Spring 2014 survey conducted by PiperJaffray & Co. among American teenagers showed that 46% of the respondents claimed that their next pair of headphones is going to be a pair of Beats. Apple came in second with 25% so if the deal goes through Apple will have 71% if the teenage audience hoping to buy expensive branded headphones and earbuds or really expensive models under the Beats name. As you can see on the chart below, after Beats and Apple the only other major player is Skullcandy (NASDAQ:SKUL), which lost a third of its teenage audience from spring 2013 through spring 2014. In fact while Apple and Beats grew demand all other companies named fell, though the catchall "others" category grew slightly. 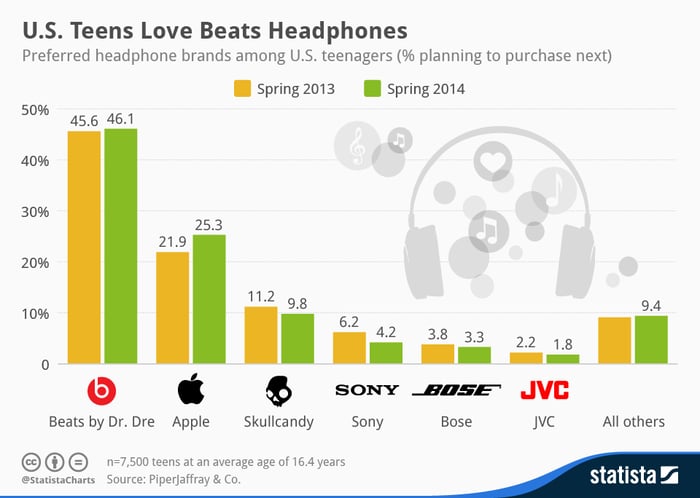 You can argue about whether Beats makes high-quality headphones (audiophiles tend to not like the bass-heavy sound), but the company has clearly convinced teenagers that Beats are an accessory worth having. This lines up nicely with Apple's ability to market its own products based on them being must-have rather than a good value. Beats are expensive -- the company's cheapest earbuds go for $99.99 and its most expensive headphones top out at $379.95, according to its website. The high cost may have made them more desirable -- like Nike (NYSE: NKE) sneakers purchased to be shown off rather than worn in any athletic pursuit.

How big is the headphones market?

According to marketing research company NPD Group, Beats controls 27% of the $1.8 billion headphone market -- and 57% of the market for "premium" headphones, ones that cost $99 or more. Those numbers should grow if the chart above is accurate and the brand's teenage fans can scrape together enough money to buy the pricey audio accessory.

The market itself is also growing. NPD Group consumer electronics analyst Ben Arnold told CNN in January that though the headphone market may be slowing from its double-digit growth of recent years, there's no sign of a crash. With December's sales, he expects 2013 to top $2 billion, and says sales should go up another 5% to 7% in 2014.

Total Beats sales -- which include other audio devices and its subscription music service -- could be as much as $1.5 billion annually, according to The New York Times.

Under Apple those numbers can be expected to grow as the company will have the ability to not only feature Beats headphones and earbuds more prominently in its retail stores (they are already sold there), it would also be able to offer Beats upgrades when it sells an iPhone, iPod, or even a Mac computer or iPad tablet.

Apple may be buying Beats mostly for its streaming music subscription music service (which I wrote about in an Does It Make Sense for Apple to Buy Beats?) but the company could easily build Beats' headphone business into a billion-plus brand. Keep in mind that Apple TV was launched in 2007 and did not bring in $1 billion in sales until 2013 -- something that CEO Tim Cook seemed awfully proud of at the company's most recent shareholders meeting.
Beats products may be somewhat of an afterthought, with Apple mostly lusting after its music service as a way to combat future drops in digital downloads. But it's a pretty valuable side item that's likely worth more under Apple ownership than it would be paired with nearly any other brand.

Headphones are a good busines

Headphone designers estimate the cost of making a fancy headset is as low as $14, according to The New York Times.

That's a spectacular markup. Even if the high-end headphones cost more than that, the margins are still impressive. If you assume Beats can make a pair of headphones that retails for $199 for say $40, that's a stunning profit margin. The large margin also gives Apple tons of room to bundle Beats products as enticements to get people to buy Apple's iPhones, iPads, iPods, and computers at very good deals leading to larger purchases.

Apple is making a smart move

The headphone business might not be the focus of the deal for Apple, but that doesn't mean it's not lucrative. The company should be able to grow sales of the audio products and leverage those items to increase sales of its other products, and it should also be able to expand the Beats line. Being part of Apple should also benefit the Beats line as Apple has nearly endless funds for research and development while Beats as a strartup -- albeit a very successful one -- had cash constraints.

Tim Cook and Dr. Dre may make an odd couple, but their companies fit together perfectly. Beats' headphone business should flourish under Apple.