Google (NASDAQ:GOOG) (NASDAQ:GOOGL) has innovated many kinds of technologies that help make sense of the Web's vast trove of data. But, the company now faces a very real problem: spending its rapidly expanding cash hoard wisely. The Internet search leader is now sitting on more than $59 billion in cash and short-term investments, and an additional $2 billion in long-term holdings (bonds with a maturity period greater than one year).

That figure pales in comparison to Apple's (NASDAQ:AAPL) $150 billion cash hoard, and Apple has lately been paying dividends and instituted a massive share buy back programs, while Google is ranked No.1 on the list of the biggest companies that do not pay dividends. Google only repurchases its shares occasionally on a case-to-case basis (usually after a big acquisition to avoid excessive share dilution). However, Apple has spent $46 billion on share buybacks and another $18.4 billion on dividend payouts over the last two years. 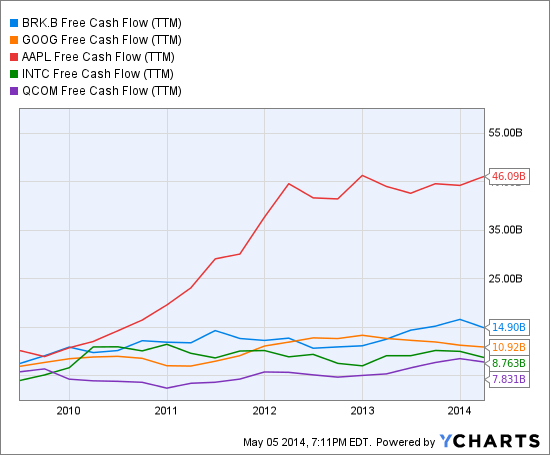 Google is a victim of its own success. Its core business model involves selling advertising space on its search engine and requires low capital expenditure, but yields fat profit margins.

Having too much cash might seem like an enviable problem for companies starved of the vital commodity. But, a ballooning cash position can quickly get to a point where shareholders begin to get restless and start to give the company's shares a lower value because too much of the stock price is held up by the cash, which yields little real returns.

As long as Google's share price keeps growing nicely, shareholders are unlikely to be concerned about excess cash. But, when the markets get choppy, this can become a source of concern for investors.

More idle cash than Berkshire Hathaway
Warren Buffett, the legendary Berkshire Hathaway chairman, recently conceded that the company's ability to generate cash is quickly becoming a source of worry. Yet, Google's cash is expanding at more than double Berkshire Hathaway's rate. Berkshire holds about $50 billion in cash and short-term investments. 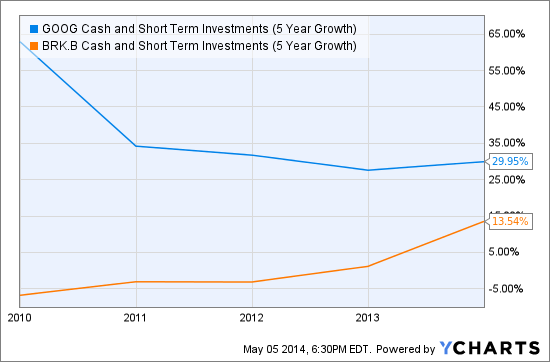 Some analysts contend that Google needs to keep its cash to easily finance acquisitions. Google is lucky in this respect because unlike eBay, which faces a hefty tax charge after repatriating $9 billion of its cash held overseas, Google has $39 billion parked overseas, while the other $20 billion of its cash is held at home and readily available.

Google has become a major M&A, or mergers and acquisitions, force. The company spent $17.6 billion on acquisitions over the last three years. But, that translates to just 50% of the cash it generated during that stretch.

A peek at Google's acquisitions reveals that many of them, with the exception of the likes of YouTube, Motorola, and DoubleClick, are quite tiny, and often unrelated to the Internet giant's core business.

The company also invests in so-called ''moonshot'' projects such as Google Glass and Google X, which involve building revolutionary products from scratch. But ultimately, Google does not have a history of making large acquisitions that require large amounts of cash. It's also sad that many of these projects and acquisitions have not generated fair amounts of shareholder value.

Other options for Google
Google is left with two options on how to use its excess cash: instituting share buybacks, and/or paying dividends.

Several studies have revealed that shares of companies with substantial share buyback programs routinely outperform their brethren with smaller, or no buyback programs. The PowerShares Buyback Achievers ETF tracks companies that have reduced their shares outstanding by 5% or more over the past year.

Shares of companies in the PowerShares Buyback Achievers ETF yielded 24% better returns than the S&P 500 last year, as shown in the chart below. 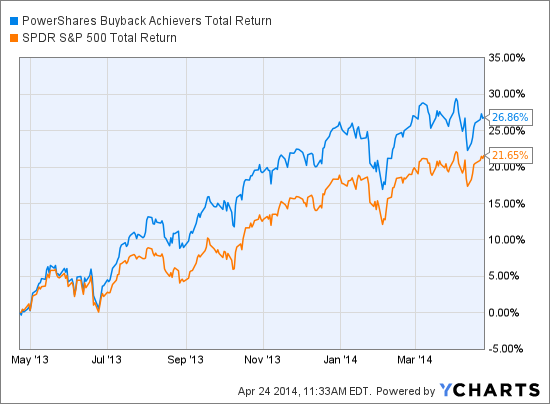 A share buyback of at least 5% over a one-year period is usually considered satisfactory. Google's market cap currently stands at $358.72 billion. To make that mark, Google would have to repurchase shares worth about $18 billion over the next 12 months. But, Google's readily available cash is ''only'' $20 billion, and such a massive share repurchase would leave only $2 billion in liquid cash. So, that might not be a feasible solution the moment.

Another, more viable option for Google would be to institute a dividend program, borrowing a leaf from Apple, which initiated a dividend payout program two years ago at a 12% payout ratio, then hiked it to 30% the following year. Google is expected to have an EPS near $43.50 in fiscal 2014. A 12% payout ratio would yield a dividend of approximately $5.20. Granted, that looks minuscule for dividend investors since it would translate to a dividend yield of barely 1%. But, analysts predict that Google will grow its cash pile by $20 billion every year through 2016, which would give the company plenty of cash to keep growing dividends.

Foolish takeaway
In the past, Google has often used acquisitions as a means to invest excess cash. But, this has not worked very well so far, and the company will soon have to consider repurchasing shares, instituting a dividend program, or both, to keep investors happy.