Duchenne muscular dystrophy, or DMD, is an inherited disorder that is universally fatal. The disease is characterized by a mutation in a gene encoding dystrophin, a critical protein within muscle.

This mutation ultimately leads to a lower expression of the protein in boys afflicted with DMD, causing muscle weakness and eventually cardiac or respiratory failure by the mid-20s.

Presently, there are no approved treatments for this rare genetic disorder, with doctors limited to prescribing supportive care such as leg braces or respiratory therapy in older patients to prevent complications. But that may all change with the advent of a new generation of DMD drugs.

Regulators might be softening their stance on DMD drugs
DMD drugs developed to date have tended to fail in late-stage testing or show only modest signs of efficacy in midstage trials -- at least in the traditional sense of clinical trial design and statistical analyses of study endpoints.

Recent flip-flops by regulators in both the U.S. and EU may signal an ongoing paradigm shift regarding DMD drugs, however. Last month, the Food and Drug Administration did an about-face for Sarepta Therapeutics' (NASDAQ:SRPT) DMD drug eteplirsen. The agency previously declined the drug for a potential accelerated approval based on promising midstage data, but then decided that it is now willing to review such an application, with the condition that the company completes at least one additional late-stage study.

So what gives? It's no secret that patient advocacy groups have played a major role in pushing regulators to soften their stance, and for good reason. At the end of the day, DMD patients today have no hope of receiving any significant form of medical intervention to delay or halt their worsening condition.

That being said, regulators on both sides of the Atlantic haven't completely let these companies off the hook in terms of meeting certain scientific standards -- instead requiring each company to complete a full-fledged late-stage trial prior to full approval.

Will Prosensa rise from the ashes?
In September 2013, GlaxoSmithKline and Prosensa Holding (NASDAQ: RNA) announced that a late-stage study for their once-promising DMD drug drisapersen failed to meet its primary endpoint. Following this clinical failure, Prosensa shares cratered and Glaxo returned the full rights to its partner. 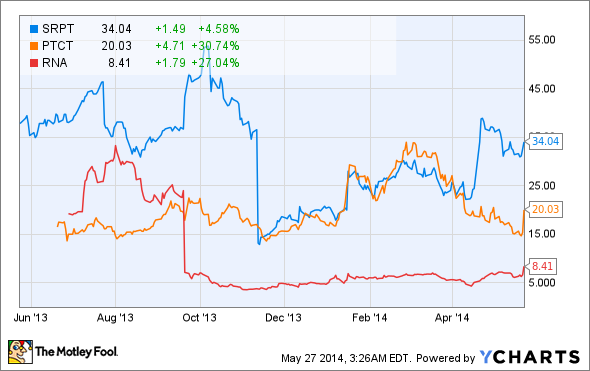 Without much else to bank on, Prosensa's management has been busy digging deeper into drisapersen's trial data. The company hopes to resolve the variability surrounding how boys perform on what is known as the six-minute walk test. Put simply, there is a lot of variability both among and within studies, making it hard to suss out a clinically meaningful benefit for drisapersen.

Sarepta's management has argued that dystrophin production -- and not performance on the six-minute walk test -- should be used as a measure of clinical benefit. .

In a corporate update earlier this month, Prosensa said it plans to restart drisapersen's clinical program following feedback from patient groups and clinical researchers. And in a somewhat surprising piece of news, management said said drisapersen may even have a viable route toward regulatory approval, which would be announced before the end of June. If that comes to pass, Prosensa stock could rip higher in a manner similar to its peers, giving investors good reason to keep an eye on this small-cap biotech.

Foolish wrap-up
If we've learned anything from DMD drugs, it's to never say never. Not many people thought that the drugs from PTC or Sarepta would be given a regulatory pathway prior to the conclusion of their late-stage studies, but this is now a reality. Even so, common sense would seem to dictate that Prosensa's path forward should be more difficult, given that drisapersen failed to outperform the placebo in a late-stage study. By the same token, the dramatic shift in the regulatory climate for these drugs could lead to more surprises down the road. Stay tuned!

Is Prosensa Holding About to Soar? @themotleyfool #stocks $SRPT $PTCT Next Article
Current