SandRidge Energy (NYSE: SD) is such a different company from just a few years ago. It has new leadership in place that has refocused its asset base by selling a number of assets and slashed capex spending to a more reasonable amount. However, it has undergone one more significant change that investors have missed. SandRidge Energy is focusing on using technology and innovation to really take it to the next level.

One of the technologies SandRidge Energy has increasingly been investing in the past few years is seismic technology. It's a service that big oil-+field service companies like Schlumberger (NYSE:SLB) and Baker Hughes (NYSE:BHI) offer to their customers, but one few investors really understand. Schlumberger's service is StimMAP while Baker Hughes offers its customers IntelliFrac, with those names being by design. These services enable drillers like SandRidge Energy to gather intelligence and map what's underground so it can perform better frac jobs on its wells.

Last year, SandRidge Energy invested to acquire 730 miles of 3D Seismic data so that it could understand the rocks underneath its acreage. This data reveals fractures and faulting within the rock that SandRidge Energy believes are more likely to hold hydrocarbons. This will give SandRidge Energy a better idea of where exactly to drill a well as the following slide notes. 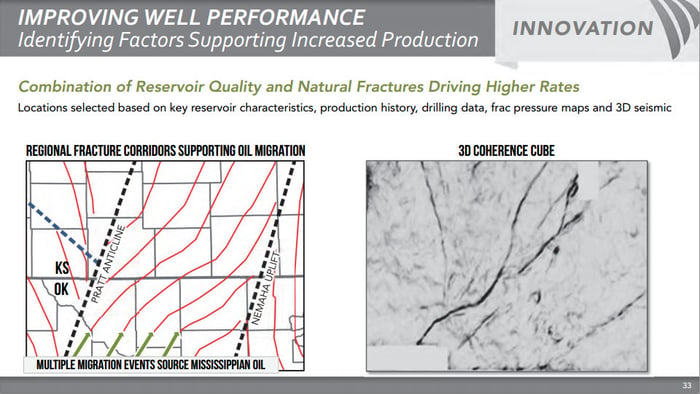 This year, SandRidge Energy is planning on using some of its $120 million land and seismic budget to acquire another 1,070 miles of new 3-D seismic data. It's an investment that should improve production rates and ultimate recovery of new wells the company drills in the areas where it's acquiring the data as SandRidge Energy should know exactly where to place its wells for optimum performance.

Turning prototypes into success
Another big improvement we're seeing from SandRidge Energy is in its innovative new well designs. Last quarter, the company noted that it drilled its first dual stacked lateral well in Kansas. As the slide below notes, that well was drilled for just $5.2 million, which was a significant savings from the $6 million it typically costs the company to drill two wells. 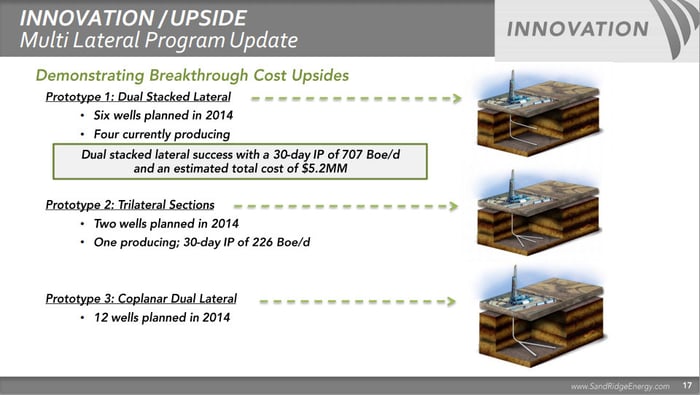 As that slide notes the company saw solid results from its first few wells as production was over 300 barrels of oil equivalent. While that is less than the company's typical well, these wells cost a lot less to drill so the economics are still fairly compelling. Because of this, it's still planning to drill a number of wells of each prototype this year. These innovations will enable SandRidge Energy to drill more wells with less money. Even more importantly, it will allow SandRidge Energy to develop some areas of its acreage that might not have been economical with a standard single well design.

Further, combining seismic data with these new well designs should enable SandRidge Energy to unlock areas of its acreage that might never have been possible before. The company can use seismic to discover a pocket of oil and then strategically drill a stacked lateral well to economically extract that oil. This has the potential to create a lot of value for SandRidge Energy investors as it will make more of its acreage economical to drill while improving already solid economics elsewhere.

Investor takeaway
SandRidge Energy is really becoming a very innovative driller. It's investing to acquire the seismic data it needs to drill better wells while at the same time looking at using different types of wells across its acreage to improve its economics. This is only the beginning of the innovations SandRidge Energy is using to increase its production and decrease its costs as the company has also developed a three-step well management process to use premium artificial lift technology to improve the performance of its wells. These are changes that are having a big impact on the future of SandRidge Energy, but are missed by most investors.