The Dow Jones Industrial Average (DJINDICES:^DJI) was trading just under breakeven by 3 p.m. EDT following negative news from the International Monetary Fund. The IMF today cut its 2014 economic growth forecast for the U.S. to 2% (from 2.8% projected in April) and said the economy wouldn't reach full employment until near the end of 2017. Nonetheless, U.S. automotive and airplane sales remain robust. With that in mind, Boeing (NYSE:BA) and Ford (NYSE:F) both received positive news today.

Inside the Dow, Boeing announced a finalized order with Turkish Airlines for an additional 15 737 MAX 8 passenger aircraft. The order is valued at $1.6 billion at list prices, though these orders are typically subject to significant discounts when all is said and done. Still, this order is significant, and it comes after the Turkish carrier in May placed its largest Boeing order in history for 50 737 MAX and 20 next-generation 737 jets.

With today's deal on the books, Turkish Airlines now has more than 100 unfilled orders for Boeing airplanes. The 737 MAX has now surpassed 2,000 orders from 41 individual customers, according to Boeing, and the 737 family remains the world's best-selling airplane.

This is the latest in a string of positive developments for Boeing, which just late last week won its biggest order from a Chinese carrier when China Eastern Airlines agreed to buy 80 737 jets valued at $7.4 billion at list prices.

As orders continue to pile up from emerging markets, it has become clear that Boeing is well positioned to gain more than its fair share of profits as the world's fleet continues to refresh and expand.

Outside of the Dow, Ford's struggling Lincoln brand won a huge victory when AutoPacific announced its 18th annual Vehicle Satisfaction Awards today. The automotive research firm announced that Lincoln was its most satisfying premium brand.

"Vehicles that score highest in the Vehicle Satisfaction Awards are delivering value and satisfaction across a wide range of attributes," AutoPacific President George Peterson said in a press release. "The winners perform well in 50 separate categories that objectively measure the ownership experience."

This result will likely surprise many investors and consumers alike. That said, the Lincoln brand is beginning to gain some momentum on its long road to redemption. 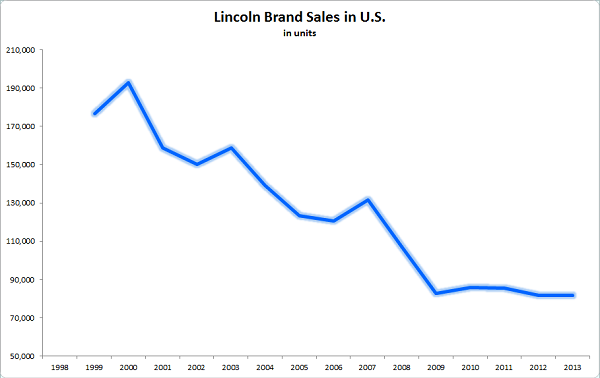 While the Lincoln's brand sales are significantly lower than a decade ago, in 2014 they have rebounded 21% year over year through May. Lincoln's refreshed MKZ has been well received and sales of its all-new MKC crossover began just last month. The MKC is expected to sell well in one of the hottest luxury segments in the market. Lincoln plans to unveil an all-new vehicle next year, along with a refreshed Navigator. Following those two vehicles will be yet another all-new vehicle in 2016 -- those vehicles will help reshape Lincoln's image over the rest of this decade.

After Ford sold off many of its noncore brands, including Aston Martin and Jaguar, the automaker's revival of the all-but-dead Lincoln brand will be important for growing revenue and margins in the years ahead. While this is the first step in a long journey, Ford desperately needed some positive news surrounding its Lincoln brand, and this could be just what the doctor ordered.