Google (NASDAQ:GOOG) (NASDAQ:GOOGL) showed off a lot of new software at its I/O Conference earlier this week, with the goal of staying one step ahead in mobile, wearables, autos and more. Here are some of the most important Android announcements Google made at its conference.

Android One
Google is hoping to expand its Android reach even further into developing markets, and will make that happen with new standards called Android One. This new program requires phones running the Android OS to meet specific hardwire requirements, in order to create a more unified Android experience.

While this is expected to help original equipment manufactures build phones faster, Google's real aim is to cut down on pre-installed apps it doesn't want on Android and to make sure Android phones can easily be updated with new software. It's yet another step in Google trying to get a better hold on its software.

The first phones under these standards will be released in India for under $100.

Android Wear
While Android Wear was already announced back in March Google put out additional details and officially made the OS available. Google displayed some functions of the Android Wear SDK, including Google Now cards which users can swipe through, and voice commands initiated by the the familiar "OK Google."

Wear will be able to handle web searches and take questions from users by pairing with an Android smartphone. Smartwatches running Android Wear can also take dictated notes and reminders which are then stored on the phone.

Aside from phone call notifications, Android Wear also allows users to use voice commands to access apps from a phone. Google demoed this by requesting a car through the ride-sharing app Lyft, just by using a voice command to a smartwatch.

LG's G and Samsung's Gear Live smartwatches are now on sale -- both running Android Wear -- with the Moto 360 coming later this summer.

Android TV
Just as the name suggests, it's Android for the TV. This wasn't a big surprise considering everyone and their brother was anticipating this announcement at the conference -- but it's still a big deal. 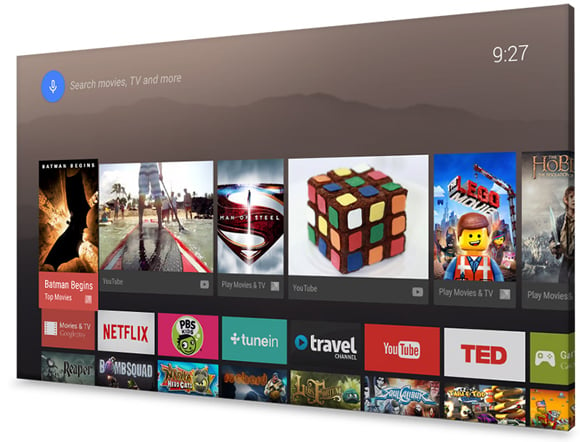 Android TV can be implemented into television sets or set-top boxes. Source: Google.

Android TV is built on the same system as Android phones and tablets, so the interface will be familiar across devices. The OS learns viewing habits and will offer up content suggestions based on what users watch.

As expected with any Google OS, search will be at the heart of Android TV. Users can use voice commands to search for shows, actors, academy award winning films, etc. just like they would in a typical Google search.

The OS works the same way as Android for tablets and smartphones in the sense that OEMs can implement it the way they want. Sony, Sharp and a few others will release television sets running Android TV, while Asus and a few others are releasing set-top boxes with Android TV. The OS will also work like Chromecast, allowing users to cast content from their devices to the TV.

As a cool side note, Chromecast is getting an update soon which will allow users to cast content from devices that aren't on the same Wi-Fi network as the device. For example, your neighbor could send you a funny video from his house -- if you give his device permission to do so, of course.

Android Auto
Building on the Android Automotive Alliance the company launched earlier this year, Google officially debuted Android Auto this week. The system is a way to cast the Android operating system onto a car's in-dash screen, allowing for voice commands and app display -- all specifically designed for the car's infotainment screen. 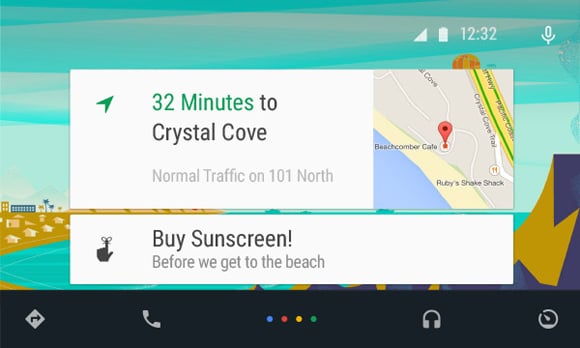 The focus of Android Auto is for users to control navigation, music, texts and phone calls all through Android's voice commands. Some of the display on the car's screen will be simplified, like Google Play controls, similar to how Apple's iOS in the Car isn't a direct replica of the OS.

Voice commands not only navigate you to where you're going, but you can also use them to ask when the place you're going will close. The system also pairs with physical buttons in the car, so replying to messages will be initiated by pushing a button on the steering wheel.

Google says the software kit will be released soon for developers to start creating apps. Right now, nearly 30 auto manufacturers have partnered with Google to bring Android Auto to their vehicles.

Android "L" preview
Google gave a preview of its next Android OS, referred to as "L" right now. The new version has a simpler and cleaner design and some of the app tiles look a lot like Microsoft's Windows Phone OS.

Google's vice president of design, Matais Duarte, said the new OS has a "material design" element that will allow developers to create looks that feel like designs in the real world -- giving them more depth than before. Navigation has also been simplified with triangle, circle and square options at the bottom. The OS also has smoother animations and transitions between functions.

Google is also including new guidelines for helping developers make apps that work with the new designs across multiple Google platforms.

Notifications will also be updated in the new Android version, adding the ability to access notifications from the lock screen and respond to them without unlocking the phone.

Foolish thoughts
All of these announcements are pegged at keeping Android as the dominant OS, not just for mobile but also for wearables, cars, and now the living room. Google isn't shy about its pursuits, boasting at the I/O Conference that Android has one billion active users, and counting.

Like Android for mobile, Google won't license Android Auto, Android Wear, or Android TV to any OEMs, but instead make its money through advertising and services. And with these latest announcements, Google is positioned to do that better than ever before.

Of course we won't be seeing ads on a car's in-dash infotainment screen or the small display screen of smartwatches, but you can be sure Google will be using the data from these new systems to target ads even better and deliver them to the right device. Add to all this the new Android One program to expand further into developing markets, and it's clear Google's innovations and software dominance have no end in sight.