Wall Street's major indexes have fallen slightly today, and the Dow Jones Industrial Average (DJINDICES:^DJI) is down just 0.15% near the end of the session after recovering from early losses. Markets are falling in part because St. Louis Fed President James Bullard said the jobless rate will fall below 6% and inflation will rise to 2% this year. Those are fairly normal levels for the economy, meaning fiscal stimulus will continue to be pared back.

The stock market has feasted on low interest rates since the recession, and a rise in rates would make corporate borrowing and investor leverage less attractive. But the upside is that a stronger economy would mean more demand for companies, perhaps spurring spending of the cash that's sitting on corporate balance sheets.

International locations like this one are becoming a headache for Wal-Mart. Image source: Wal-Mart.

Why Wal-Mart is dragging down the Dow
Wal-Mart (NYSE:WMT) is the worst performer on the Dow today, and its labor practices are once again in the spotlight. An arbitration in China threw out a landmark suit brought by the country's trade union that sought compensation after the retailer closed a store in Changde, Nunan, China.

Wal-Mart offered a settlement of one month's pay per year to the 130 workers who were employed at the store, but 69 of them rejected the settlement and took their complaint to arbitration. That case was thrown out today, but it's likely headed for further appeals.

Labor disputes aren't new for Wal-Mart, but these are notable because they occurred in China, a country that's not exactly known for its labor practices. Not only is this bad press in the world's most populous country, but it highlights the challenge Wal-Mart has in establishing a presence there.

Wal-Mart has saturated the U.S. market and is now experiencing same store sales declines here, so it has to look overseas for growth. China is a logical market, but poor returns caused Wal-Mart to close 20 stores in an effort to regroup before trying to open 110 stores over the next three years.

The failure in China isn't isolated, either -- something I looked at in depth in an earlier article. You can see below that international operating margins have been falling since 2008 and dropped like a rock in the past year. 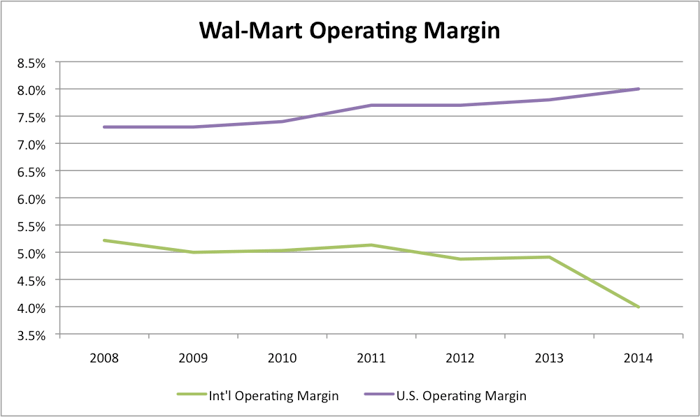 Wal-Mart simply isn't the retailer it once was, and labor conflicts -- whether they're at home or abroad -- don't help the brand. The stock is down slightly less than 1% today, which isn't the end of the world, but the long-term story is deteriorating for a company that was once the most dominant retailer in the world. Few companies hold that crown for long, and Wal-Mart's days at the top may be numbered.