The shares of regional casino operator Isle of Capri Casinos have been spiking lately because of media reports about a potential tie-up with casino property owner Gaming & Leisure Properties. Is it time to buy in? 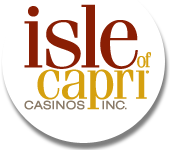 Shareholders in regional casino operator Isle of Capri Casinos (NASDAQ: ISLE) have been waiting for some good news after they have seen the company's stock price generate a negative cumulative return over the past five years. Isle of Capri Casinos has been hurt by a general lack of profit growth that has partially resulted from rising competition in the regional casino space, because more states have gotten on the casino bandwagon in the hopes of finding tax windfalls with which to plug their budget holes. Fortunately, good news may have finally arrived in the form of potential merger interest from casino property owner Gaming & Leisure Properties ( GLPI ), a recent spinoff of regional casino operator Penn National Gaming. So is more upside in the offing for Isle of Capri Casinos?

What's the value?
Isle of Capri Casinos is a niche operator of casinos under the Isle and Lady Luck brand names, mostly in secondary markets like Pompano, Florida, and Kansas City, Missouri. While the company has been able to grow its top line modestly over the past few years, partially thanks to the addition of non-gaming amenities at its properties, profit growth has been harder to come by due to rising operating costs and a need to engage in highly promotional activities. The net result for Isle of Capri Casinos has been reduced operating profitability and cash flow generation.

In its latest fiscal year, Isle of Capri Casinos continued to post lackluster financial results, evidenced by a 1.5% drop in its adjusted operating income. While its overall revenue ticked higher during the period, the company was hurt because fewer occasional gamblers showed up. These gamblers spend less than $100 per visit and are likely the target market for the company's high-margin, non-gaming services. In addition, Isle of Capri Casinos reported a negative effect due to additional free play and giveaway spending that it needed in order to keep its customers happy and willing to stay at the tables.

A better way to go
Isle of Capri Casinos likely has some upside in the event that Gaming & Leisure Properties or another gaming industry competitor launches a bid for the company. On the downside, though, Isle of Capri Casinos seems to have little business momentum at the moment, although winning the bid for a license in Philadelphia could conceivably change that outlook. As such, investors should probably take a pass on the action at Isle of Capri Casinos in favor of a gaming company with a better profit growth story, such as Pinnacle Entertainment (NYSE: PNK).

Like Isle of Capri Casinos, Pinnacle Entertainment focuses on secondary markets, like St. Louis and New Orleans.  However, unlike its smaller rival, Pinnacle has enjoyed a favorable profit growth story lately. Its adjusted operating income was up by a strong, double-digit percentage in its latest fiscal year, due in large part to its blockbuster merger with competitor Ameristar Casinos. The combination greatly improved Pinnacle's geographic diversity and created back-office efficiencies, and these positive developments should drive future cash flow growth and help the company fund new developments that will thereby enhance future shareholder value.

The bottom line
Absent a merger transaction, there is seemingly little to like at Isle of Capri Casinos, which probably explains the lack of appreciation for the company's stock price over the past few years.  As such, investors should leave this story to the speculators and look for greener pastures elsewhere in the gaming space.