Please ensure Javascript is enabled for purposes of website accessibility
Log In Help Join The Motley Fool
Free Article Join Over 1 Million Premium Members And Get More In-Depth Stock Guidance and Research
By Adam Galas - Jul 7, 2014 at 9:26AM

Upstream MLPs are beloved by investors for their high yields. This article takes a look at two lesser known oil and gas producers, among the highest-yielding in the industry, to see if they deserve a spot in your portfolio.

As part of a larger series exploring the upstream MLP industry, I'm taking a look at the top 11 oil and gas producers and comparing them through the prism of the four key metrics: yield, distribution growth, distribution safety, and valuation. These factors are among the most important for income investors to consider and can help you decide which of these partnerships to invest your hard-earned money in.

For example, yield + distribution growth is considered a good rule of thumb for long-term total returns. Given that the stock market's long-term (1873-2013) total returns have been 9.2% annually, and since individual securities are riskier than just parking money in a low-cost index fund, you want to invest in MLPs with predicted returns that are superior to this.

Similarly, distribution safety as represented by the coverage ratio (distributable cash flow/distributions paid) is vitally important because an MLP that is paying out more cash than it's bringing in will be forced to cut its distribution. This can result in horrific losses for investors.

Valuing MLPs can be tricky because traditional metrics such as P/E ratios don't work well in capital-intensive industries such as this. I like EV/EBITDA as a way of valuing MLPs in the same sector because it takes into account cash flow, debt, and cash on hand.

Without further ado, let's take a look at two of the highest-yielding upstream MLPs and see how they stack up.

High yield, but for a reason?

The two key factors that stand out about QRE Energy (NYSE: QRE) and LRE Energy (NYSE: LRE) are their high yields and rock-bottom valuations. In fact, these two MLPs are the most undervalued partnerships in this industry, which is either a red flag or buying opportunity. This article will explore the likely reasons for these low valuations to determine whether they deserve to be on income investors' radar.

Higher-risk MLPs
QRE Energy has traded at a substantial discount for two reasons. First, prior to the buyout of its general partner, its management fee structure was horrendously disadvantageous to unit holders. Management was paid in units, and this resulted in high dilution of up to 10% per quarter. The recent buyout, despite resulting in a final 20% dilution, is spaced out over four years and is 7% accretive to DCF/unit. As such, it represents a catalyst for future distribution growth.

However, QRE Energy recently angered Wall Street by announcing a change in strategy. Rather than attempting to buy additional property with existing low-decline wells, it would increase its capital expenditures by 82% to increase its existing production.

With a 10% annual production decline rate and $70 million needed to just maintain its current 19,000 barrels/day, the market is skeptical of management's decision to alter its acquisition based strategy, especially since its expansion projects aren't likely to result in distribution growth until 2016.

LRE Energy is the second-smallest upstream MLP by production, but this might allow it to be a fast grower. For example its first quarter 2014 results are very impressive.

Further reasons to like LRE Energy include its 5.2% increased production in April of 2014, seven consecutive quarters of distribution growth,
and its sponsor, Lime Rock Resources. Lime Rock owns 37% of LRE Energy's units and has 54 million barrels of oil equivalent reserves it can drop down to LRE. This represents a potential 180% increase in reserves and potential growth catalyst.
So why is LRE trading at a discount? 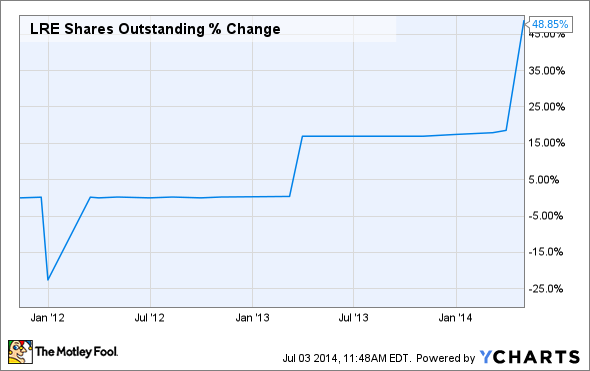 This graph shows a near 30% increase in unit count this quarter, coinciding with the start of LRE Energy's "at-the-market" (ATM) equity program. With only $50 million in remaining borrowing power, LRE Energy will need to raise money by selling additional units. With a yield of 11.4% and a penchant for increasing distributions every quarter, this represents a very high cost of capital. Future dilution may threaten the current distribution or make further growth difficult.

Foolish bottom line
High yields can sometimes indicate troubled MLPs, and this used to be the case with QRE Energy. However, with the buyout of its general partner and management's new growth strategy, I believe that the current valuation represents a strong buying opportunity that long-term income investors should consider. LRE Energy's ATM program and its high dilution potential concern me, however, and I'd recommend that investors wait for management to prove that it can use this capital effectively.