Regions Financial Corp. reserved $2 million for the first quarter, which represented 1.6% of operating revenue. That compares with 5% for the $10 billion-plus peer group, according to the FDIC.

The lower-than-peer level of new reserves for the quarter indicates that the bank's problem loan portfolio should continue to mend. Regions does trail comparable regional banks in this measure, a concerning reality. That said, Regions doesn't have an excessive level of problem assets; management appears to have this issue under control.

For Regions Financial, the first calendar quarter of 2014 fortunately wasn't that bad. The company generated total net revenues of $1.3 billion for the quarter -- that is total interest income plus non-interest income minus interest expense.

Over the past 12 months, Regions Financial Corp. has generated $5.0 billion in total net revenue. Of that revenue, 65% was attributable to net interest income, the difference between interest earned on loans and paid out to depositors. The remaining 35% was through fees, trading, or other non-interest revenue sources.

The bank was able to turn a profit margin of 22% on that revenue. 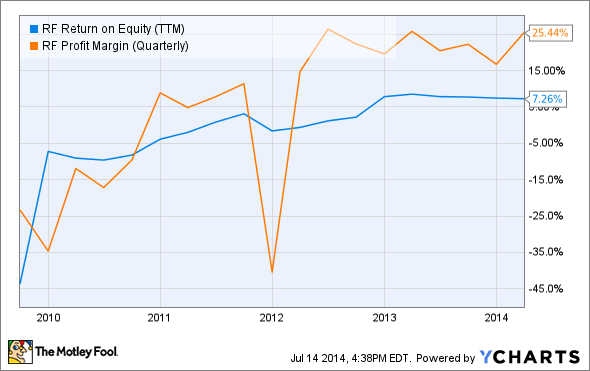 For comparison, BB&T produced a profit margin that was essentially equal to Regions, while Fifth Third blew it out of the water at 28%. BB&T's ROE was 10%, and Fifth Third's was 8.7%.

Leverage is just part of the game with banks, so if you're a conservative investor who really focuses on conservative capital structures, the banking industry may not be the best place for your money. Adding leverage is an easy way to juice return on equity, which is generally speaking a good thing. The bank increases assets and thus earnings, while maintaining a lower capital level.

Regions Financial Corp.'s assets-to-equity ratio comes in at 7.3. The average of the 62 banks analyzed in this series of articles was 9.1.

Of the major regional banks, Regions is one of the most conservative when it comes to leverage. Going back over the past 10 years, the bank has consistently limited its use of leverage to well below peer average. In fact, the bank's assets-to-equity ratio is more or less unchanged going back all the way to 2005! 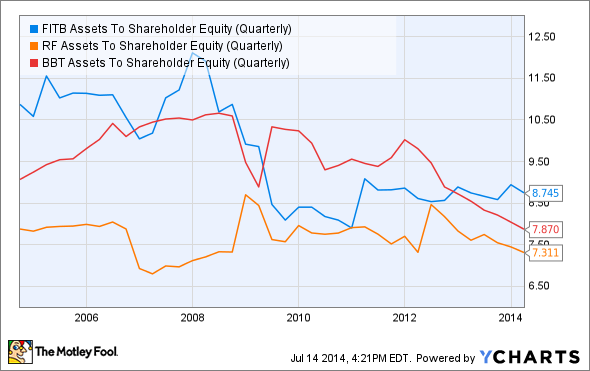 Growth and valuation
Regions Financial Corp. saw its revenues drop by 3.7% over the past 12 months. That compares with the 5.7% average increase of the 62 banks analyzed.

This change in revenue corresponded with a 12% decrease in net income over the same period. The peer set averaged an increase of 14.1%. Fifty-four percent of all U.S. banks saw year-over-year earnings growth in the first quarter.

Moving now to valuation, Regions Financial Corp. traded at a forward price-to-earnings ratio of 12.5, according to data form S&P Capital IQ. That compares with the peer set average of 16.67 times.

Regions Financial Corp.'s market cap is, at the time of this writing, 1.4 times its tangible book value. The peer set average was 1.9. 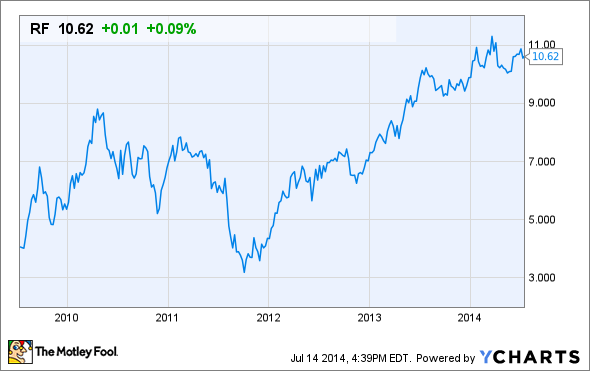 From the beginning of this analysis, Regions' financials have consistently trailed both the peer set and its more directly comparable institution. But its performance hasn't been so poor as to justify such a steep discount in terms of price to book value. BB&T trades at over 2 times price to TBV. Fifth Third, which I also think is undervalued, trades at 1.6.

Regions reported earnings per share of $0.21 in the first quarter. Median analyst expectations for Q2 put earnings at $0.21 per share.

Among these three regional players, it is my opinion that BB&T is the strongest bank in terms of management and performance. However, from a purely value investing standpoint, Regions' valuation is unjustifiably low. This bank may not stay in your portfolio for the next 20 years, but it may be a good fit for the next two or three.

Regions Financial Trails Its Peers, but That Doesn't Mean It's Not a Buy @themotleyfool #stocks $RF $FITB $TFC Next Article
Current