Slowly but surely, Apple (NASDAQ:AAPL) continues to piece together various aspects of a possible payments service. Tim Cook continues to drop hints of Apple's ambitions, further fueling speculation. That includes tidbits such as saying the mobile payments market is in its "infancy," as well as noting on the last conference call that iTunes now has 800 million active accounts with credit cards on file. Plus, payments are an obvious use case for Touch ID.

Apple just quietly rolled out a new feature that could hint at what its possible payment service may be called.

The service also leverages Apple's Passbook, and has gone live in the U.S., Japan, and Germany so far.

What it means
While this move seems like it merely adds minor convenience, it does offer some possible clues about Apple's longer-term payments strategy. Eventually, Apple could allow users to add funds directly without the assistance of a retail rep, making use even more convenient.

More importantly, iTunes Pass is just one step away from offering a direct way to use an iPhone to pay for goods or services in a retail setting. To be clear, this would probably start in Apple's own retail stores. However, Apple could get broader merchant support after it creates an iTunes Pass payment platform. Retail merchants are already embracing other features that Apple has introduced that have retail potential, most notably iBeacon. 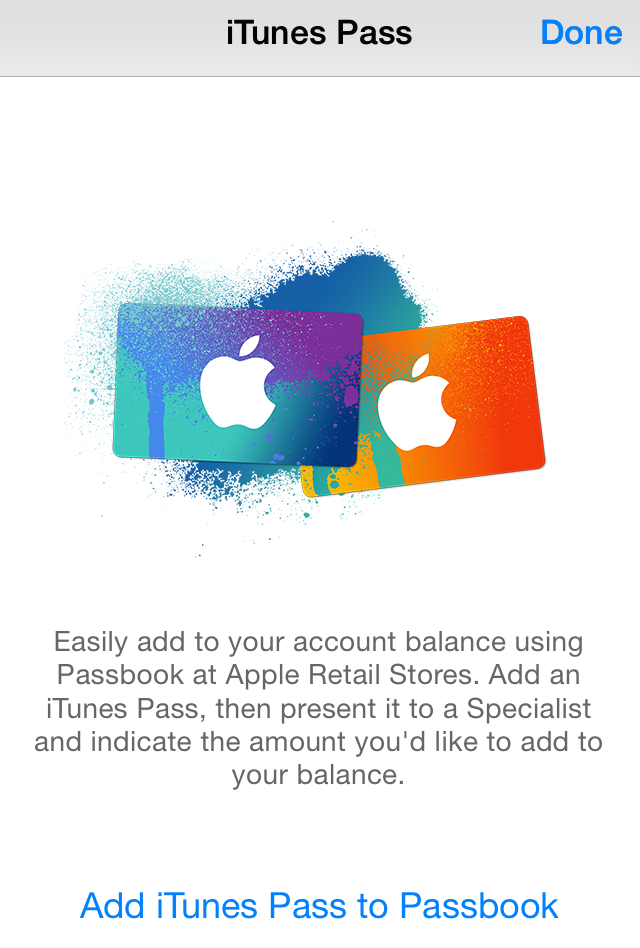 Merchant adoption would only require a QR code scanner, which is a much lower hardware hurdle compared to supporting NFC. Combined with iBeacon, merchants could offer targeted and localized offers to iPhone users and then subsequently accept payment from those same iPhones using iTunes Pass.

It also suggests that Apple's method will be to store value on iTunes accounts, rather than become a payment processor itself. In other words, Apple could be pursuing more of a debit model than a credit-processing model. That also makes sense since Apple is probably uninterested in collecting payment processing fees; it just wants to sell more iPhones.

This would be similar to Google Wallet, which also stores money for later use. Google Wallet received an update Wednesday, adding features like managing gift cards and requesting money from friends and family. eBay's PayPal does both: processing credit card payments for merchants but also allowing users to store funds for later use. PayPal has also attempted to push into physical retail, but with limited success.

Apple has all the pieces of a cohesive payments service. Now it just needs to launch it.

Is This What Apple, Inc.'s Payments Service Will Be Called? @themotleyfool #stocks $AAPL $GOOGL $EBAY $GOOG Next Article
Current