That seems to be the overall investor reaction to Apple's (NASDAQ:AAPL) recent quarterly report. Shares dipped a bit in after-hours trading after the initial figures hit, likely as the iPhone figure came in shy of consensus expectations. After everything was said and done, shares were only down marginally from the close, merely erasing similarly marginal gains from the day.

The headliners
Total revenue added up to $37.4 billion, which resulted in net income of $7.7 billion, or $1.28 per share. The Mac maker sold 35.2 million iPhones, 4.4 million Macs, and 13.3 million iPads. Both iDevice figures were light compared to market expectations, but not by much. Analysts were expecting Apple to sell 35.4 million iPhones and 14.2 million iPads.

Mac sales were surprisingly robust, which the company attributed to strong MacBook Air sales following the incremental spec bump combined with price cut in April. Gross margin came in very strong at 39.4%, which easily bested the Street's forecasts as well as Apple's own guidance range. The high end of Apple's guidance called for 38% gross margins.

A pleasant, profitable surprise
Speaking of gross margin guidance, the Mac maker expects next quarter's profitability to come in between 37% and 38%. That caused some concern among analysts, who asked for some detail on why Apple would see a sequential decline.

The reality is that Apple was pleasantly surprised by how profitable it was in the June quarter. It was expecting a natural loss of operating leverage as revenue declined sequentially, which didn't happen. Gross margin actually increased sequentially by a hair (4 basis points), which is peculiar given revenue fell sequentially by over $8 billion. CFO Luca Maestri attributed this upside to stronger-than-expected cost improvements.

Apple has actually been enjoying this for several quarters now, as gross margin has been easily beating guidance for three quarters in a row. 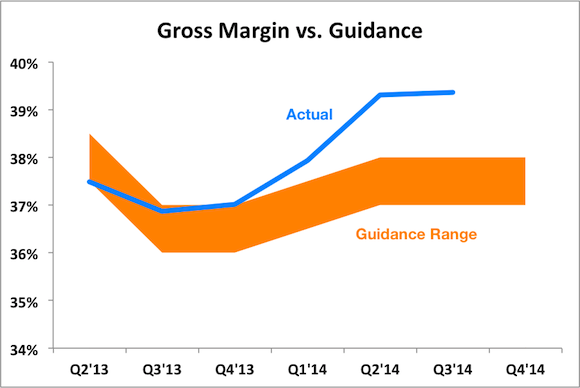 CEO Tim Cook mentioned that component pricing would likely continue to be favorable in the current quarter. Mobile DRAM and LCD display prices continue to fall, NAND pricing is relatively flat, and other components are expected to decline in line with historical rates. I wouldn't be surprised if Apple beats its margin guidance again, especially since revenue is expected to increase sequentially and regaining operating leverage should help.

3 hidden metrics
There were 3 metrics from the report that are important for investors to watch: Greater China revenue including retail, iTunes billings, and iPhone average selling prices.

iPad drag
As expected, the iPad didn't do too well. There was a reduction in channel inventory, but more importantly tablets are seeing weak demand in numerous developed markets. The silver lining is that the iPad is doing quite well in emerging markets. iPad units were up 51% in China and 45% in India.

Still, the long-term picture remains intact. Cook still strongly believes that the tablet market will soon eclipse the PC market in global unit volumes, and that there are several potential catalysts on the horizon that could spur sales, including...

Let's talk business
The deal announced last week with IBM has enormous potential. As much as Tim Cook likes to cite that 99% of Fortune 500 companies use iPads, overall tablet penetration within the enterprise remains modest compared to notebooks. Tablets are at 20% while notebooks are over 60%.

By partnering with IBM, Apple hopes to get enterprise apps written for mobile first, whereas most enterprise apps today are desktop ports that aren't fully optimized. On top of that, IBM will become an additional distribution channel for Apple, selling iPads to its large global enterprise customer base.

Buyback time
Apple ended up repurchasing $5 billion in stock during the quarter. As shares have recovered, it makes sense to be less aggressive. Again, investors are enjoying the earnings accretion from those buybacks; earnings per share jumped 20% on a 12% increase in net income. 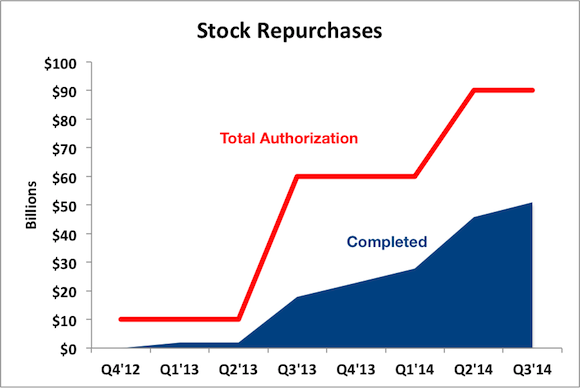 That puts Apple's total buybacks at $50.9 billion over the course of 7 quarters, with 6 quarters to go on the current $90 billion authorization. Boosting the authorization to $90 billion last quarter was absolutely the right thing to do, since otherwise Apple's buyback program would be nearly complete at this point.

The June quarter is typically Apple's slowest, along with other consumer electronics companies. The continuous string of supply chain leaks that feeds the rumor mill leads to some purchase delays from consumers, and this year is no different. As investors enter the second half of the year, we can expect Apple's product refresh cycle and possible entry into wearables drive results to fresh records all over again.