We are a long ways off from seeing the sunset for the oil industry. Photo Source: Chesapeake Energy media relations.

The year 1981 just called and said that we are out of oil. Well, according to estimates from the time, we should be.

Did some geological miracle more than double the amount of oil we have produced in the past three-plus decades? No. It's more of a disconnect between how much oil is physically left in the world and how data related to oil reserves is reported. Let's look at why these numbers have been misleading for so long and why today's current projection of 53 years of oil remaining -- based on recent numbers from BP -- is likely wrong as well.

Somewhere between 53 and 250 years, take your pick
There are a multitude of ways to describe the amount of oil remaining, but the most common is known as proved reserves. When you divide proved reserves by total production, you get the reserves-to-production ratio. This is where the 53-year estimate comes from and where that 32-year estimate originated in 1981. While the number is easy to understand, it's a red herring because it assumes production will remain constant forever and that the current proved reserves estimates represent all the oil left. As we all know, this simply isn't the case.

The problem with the term "proved reserves" is that many assume it describes a physical limitation on oil, but it is actually a calculated economic limitation. Every country has a slightly different way of calculating the amount, but the basic gist is that proved reserve estimates are what companies assume they can pull from the ground using existing technology while still generating a profit, which is based on the price of oil or gas over the past year.

This estimate can be impacted by several things: new technology that makes oil recovery less expensive, new reservoirs that were not considered economical at the time, or simply that a rising price of oil makes those once unattainable resources attainable. Overall, this is a relatively small amount of oil compared to the total physical amount of petroleum that is in the ground. The following image from the U.S. Energy Information Administration gives a visual idea of this concept. It is not to scale.

In fact, looking at the historical trend of the world's reserve-to-production ratio since 1980, we are actually at one of our most abundant times in terms of proved reserves. 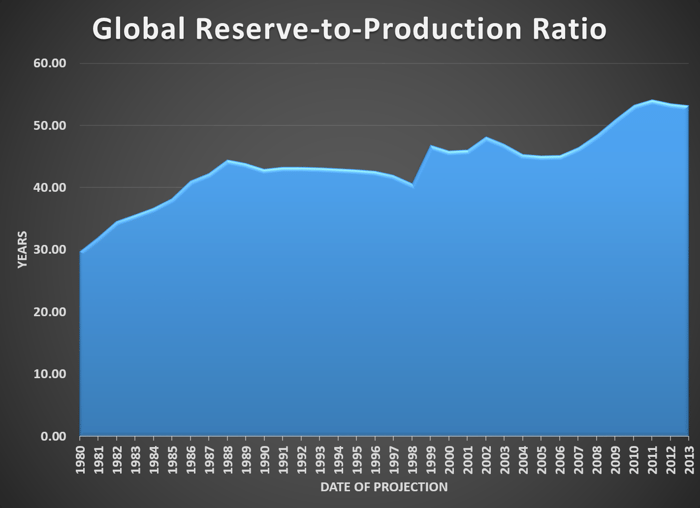 This is only the tip of the iceberg, though, because these projections don't include technically recoverable resources that are not yet deemed economical at today's prices. Considering all of the technically recoverable resources, we have enough oil to last us over 100 years at current production levels. Furthermore, if we also include more complicated oil reservoirs such as kerogen deposits, then we may have more than 250 years of oil supply. It all depends on how much consumers are willing to pay for that oil.

What a Fool believes
I'm not here to thumb my nose at peak oil theories, because there is an actual physical limit to the amount of oil in the ground. In fact, there are trillions of potential barrels of oil in Mother Nature's pressure cooker as we speak, but it will likely take thousands of years before they become oil reservoirs like those we are accustomed to drilling today. It is much more likely, however, that we will reach the economic limits of extracting oil from the ground before we reach the physical limits.

As investors, it is important to understand this dynamic because it prevents us from making hasty decisions about long-term investments. Is it possible that we will no longer use oil 53 years from now? That's not likely, but if it happens it will be because we have developed alternatives that are more economical, rather than running up against the physical limitations of what's underground.