Foursquare, the app that popularized location sharing, recently returned with an all-new version that completely dumps check-ins. Instead, Foursquare 8.0 for iOS and Google (NASDAQ:GOOG) (NASDAQ:GOOGL) Android is a city guide app, like Yelp (NYSE:YELP), instead of a gamified location-sharing service. Back in May, the company spun its check-in services into a separate app known as Swarm.

The new Foursquare app builds a profile of the user through questions about preferences regarding food and venues. It then matches those preferences with check-in histories, restaurant ratings, and data from Foursquare friends to customize location-based recommendations.

In other words, the more a person uses the app, the smarter it gets. Moreover, it continuously tracks the user's location, similar to Google Now, and provides updated recommendations automatically.

While that sounds like a solid app, Foursquare seems a little late to the party. After all, the "new" version of Foursquare does exactly what Yelp, Facebook (NASDAQ:FB), and Google Places do.

Let's take a closer look at Foursquare's business, the key challenges it faces, and whether or not it can survive in today's crowded city reviews market.

Foursquare by the numbers
To get a better picture of how big Foursquare is, let's compare its annual user numbers to Facebook's.

At this stage, Foursquare's user base is growing at a much faster rate than Facebook. The problem is that Foursquare doesn't really know how to monetize its 50 million users. The company only generated $2 million in revenue in 2012, according to Bloomberg. That means each registered user was only worth $0.10 that year. By comparison, each Facebook user was worth about $6.40 last year, based on Facebook's 2013 revenue of $7.87 billion.

Foursquare's old gamified system of check-ins could have been the perfect advertising platform for companies. Advertisers could have offered coupons and discounts for frequent check-ins, or badges to promote their businesses. Instead, Foursquare relied on regular mobile ads and launched a standard in-app advertising tool. For $50 per month, advertisers could rank higher in search results for relevant queries -- similar to Twitter's promoted tweets.

How Foursquare compares to Yelp, Facebook, and Google
Although promoting paid search results seems like a logical way to generate more revenue, it could fall into the same trap as Yelp -- where paid reviews and results overshadow honest ones. 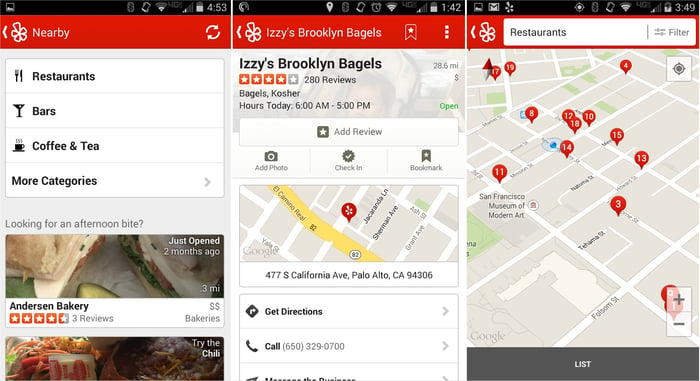 Yelp has been constantly dogged by two accusations -- that its business pages are filled with fake reviews, and that it helps remove negative reviews for a price. Yelp even admitted last September that up to 25% of its reviews could be fake. Despite these messy issues, Yelp's revenue last quarter rose 61% year over year, to $89 million, and it posted its first-ever profit, at $2.7 million.

Meanwhile, Facebook and Google rate local venues differently from Yelp. Facebook's Places feature allows users to see ratings of venues from friends, not strangers. Foursquare borrows that idea by integrating data from Foursquare friends and check-ins. Google uses a combination of Places ratings (like Yelp), Maps, and professional ratings from Zagat, which it acquired in 2011. Zagat's integration was intended to balance out the amateur reviews that undermine Yelp's reliability.

But strangely enough, Facebook, Google+, and Yelp all kept Foursquare's lost ability to "check in."

The problem with Foursquare's approach
In my opinion, the "new" Foursquare will fail for two simple reasons -- there's no reason to spin gamified check-ins into a separate app, and there's no reason for businesses to advertise on Foursquare when they can simply spend that money on Yelp, Google, or Facebook and reach a larger audience.

Foursquare could succeed by streamlining all of its past services, along with its massive database of over 6 billion check-ins, into a cohesive, gamified social network. It could have been the "fun" version of Yelp that offers collectible badges from local businesses. Instead, it split its core business in half and launched an app that feels unoriginal and unnecessary.

So far, users agree. The Foursquare 8.0 app has a mediocre 2.5 rating on iTunes, and Swarm has fared worse, with a 1.5 rating for all versions. The complaints are similar -- that users would prefer both services in a single app.

Despite "inventing" the check-in in 2009, Foursquare failed to capitalize on its early lead and let Facebook launch its own version the following year. Instead of creatively monetizing its best features, like badges and mayorships, Foursquare played it safe with dull display ads and promoted businesses. Finally, it inexplicably dumped its beloved check-in and game features -- despite user complaints -- and launched a clone of Yelp.

On the bright side, Foursquare's user base is still growing, so not all hope is lost. But even if it survives and generates stable ad revenue, it's a shame that a company with so much potential is content to play second fiddle to Yelp.