Oil and gas equipment maker Cameron International Corp. (NYSE:CAM.DL) is nearly two centuries old -- predating even the oil business itself -- but the company is targeting two of the industry's biggest growth segments right now. And while the early results are good, helping lead the stock to a market-beating 21% return so far in 2014, it is still early in the story. Let's look at how these two opportunities for growth -- plus a third reason -- could lead Cameron's stock even higher.

1. Offshore is soft, but deepwater is growing
The stocks of many offshore drillers, including Transocean, Diamond Offshore Drilling, and Noble Corp., have been hit hard in 2014, as the offshore market continues to bifurcate. While these three offshore drillers are suffering from the anticipated softness in shallow- and warm-water drilling that's expected to last for several years, the deepwater and harsh-environment offshore market is expected to expand in the coming years.

Cameron is one of the world's biggest suppliers of drilling equipment, both offshore and onshore. Last year, 59% of the company's total revenues, and 59% of its before-tax profits (not factoring in losses attributed to the corporate unit) were generated by the company's Drilling and Production Systems division, or DPS. Deepwater is so important to the company's growth that it formed a partnership with Schlumberger Ltd. in 2013 called OneSubSea, which Cameron operates and owns 60% of.

How important is OneSubSea to Cameron? CEO Jack Moore put it this way in the 2013 annual report:

The June launch of OneSubsea, a venture between Cameron and Schlumberger, was a key highlight for Cameron in 2013. I am confident that OneSubsea will prove to be one of the most transformational events, not only in the Company's history, but also for customers, as it will change the game in the way future deepwater assets are developed and maintained.

Since being formed in June 2013, OneSubSea has grown a backlog of $4 billion, which makes up nearly half of the total backlog for the DPS division. However, these projects -- as the company makes clear in its quarterly filings, are very large and complex by their nature, and this means they take a lot of time to be completed and can be subject to delays. But despite the potentially lumpy short-term results from large deals at OneSubSea, the potential "home run" deals it can produce are worth it.

2. Increased emission regulations are a boost for onshore business
Cameron is already one of the leading equipment suppliers for onshore oil and gas producers, and the North American oil and gas boom is great for business. But it goes beyond just increased E&P activity. First, producing oil and gas from shale plays requires more production activity versus traditional plays, because of the nature of the production curve. Fracked and horizontally drilled wells start off at a high level of output, before quickly declining, and then settling into a more steady -- but still declining -- level of production.

This extra activity means more business for Cameron, but environmental pressures -- and new regulations -- could lead to further growth. The federal government and some states have begun passing new requirements for oil and gas producers, aimed at reducing emissions of methane and volatile organic compounds, or VOCs, at well sites. Historically, producers have used a process called flaring -- basically burning off methane and other compounds instead of capturing them when doing so isn't financially beneficial.

While flaring methane does significantly reduce its impact as a greenhouse gas, the massive increase in drilling activity over the past decade -- expected to keep growing for the next 20 years -- is leading to huge amounts of flaring. In short, Cameron has developed a number of systems and technologies that can be implemented at the wellsite to capture VOCs and methane. In turn, the captured methane -- remember, methane is natural gas -- can then be used to power equipment, offsetting the use (and expense) of diesel. While this will add costs for producers, it's one area that the domestic oil and gas industry should improve.

3. Cameron is maximizing shareholder value
Since the beginning of 2013, Cameron has repurchased 42 million shares, reducing the share count by a whopping 18%, and has returned $3 billion in equity to remaining shareholders over that time. 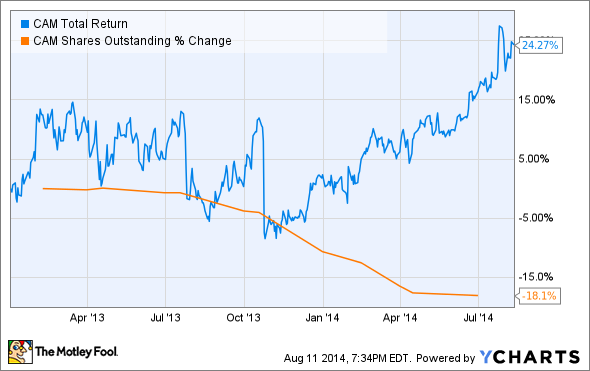 Through the end of June, the company had more than $450 million authorized for further buybacks. If management can diligently continue its share repurchase activity and further reduce shares outstanding, long-term, buy-and-hold investors will be rewarded.

Final thoughts: Best-case scenario
Don't just assume these things are a promise of market-beating returns. It's important to remember that things rarely go exactly as we expect in life, or when investing. Cameron still has to execute for shareholders to get the benefit of the three things I've discussed here. The company faces stiff competition, and it operates in markets where geopolitical risk could affect its business.

Cameron stock is performing great in 2014, but it has underperformed the market over the past two years even as the business has strengthened and the market opportunity has gotten bigger. The bottom line? If you invest in Cameron -- or any company -- keep an eye on the business performance, because if Cameron does execute on the opportunities in front of it, the market will eventually reward patient investors.