Medtronic (NYSE:MDT) just reported its earnings for the first quarter of fiscal 2015, topping analyst estimates on both the top and bottom lines. 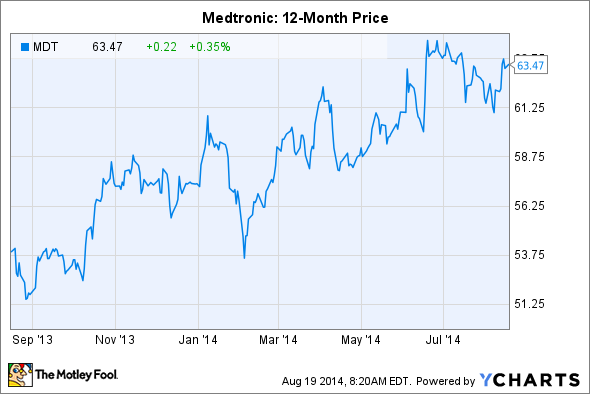 The company reiterated its prior top and bottom line guidance for fiscal 2015, expecting full-year-revenue growth between 3% to 5% on a constant currency basis, and diluted non-GAAP EPS to grow 6% to 9% year over year to a range between $4.00 to $4.10 per share. The company also reaffirmed its commitment to acquiring Covidien, the Dublin-based medical device and pharmaceutical company.

Let's take a look at three key takeaways from Medtronic's earnings, and what they could mean for investors in the long run.

Coronary and Structural Heart revenue climbed 2% to $766 million, while Aortic and Peripheral device revenue rose 6% to $232 million, thanks to rising market shares for its Endurant II and Valiant Captivia stent grafts, and strong overseas demand for its IN.PACT Admiral and Pacific drug-coated balloons.

From this comparison, we can see that Medtronic continues to post in-line growth with its rivals, while steadily forging ahead with newer products. Meanwhile, the closely watched race between Medtronic and St. Jude to make the smallest, leadless pacemakers should keep the company's heart and vascular business "thumping along" nicely.

Neuromodulation revenue rose 12% to $479 million, thanks to strong sales of Pain Stim, DBS, and Gastro/Uro devices. The segment has also gained a lot of attention thanks to its Activa "brain pacemaker," which uses deep brain stimulation systems to help treat debilitating neurological disorders. Surgical technologies revenue rose 6% to $381 million, thanks to steady growth at its ENT, Neurosurgery, and Advanced Energy businesses.

But the spine business posted a 3% decline to $743 million, due to soft sales in Core Spine and BMP (bone morphogenetic protein) products. Demand for BMP products has waned since last year, when physicians started using smaller kits on a smaller number of patients.

Medtronic's strength in neuromodulation and surgical businesses, offset by weakness in its spine business, is reflected elsewhere across the industry. Stryker (NYSE: SYK), for example, reported that its neurotechnology revenue rose 8.3% last quarter to $245 million, while surgical devices revenue rose 7.6% to $340 million. But Stryker's spine revenue also fell 1.6% to $185 million.

Investors should note that the spine business, despite its current doldrums, has some nice growth opportunities long term. Research firm Markets and Markets forecasts that the global spine surgical devices market should grow at a compound annual growth rate of 5.1% between 2012 and 2017, rising from $11.6 to $14.8 billion -- indicating that the slowdown will hopefully only be temporary.

Strong growth in diabetes
Medtronic's smallest segment, its Diabetes Group, remains its fastest growing one thanks to strong demand in the U.S. for the MiniMed 530G with Enlite, a first-generation wearable "artificial pancreas," which automatically stops insulin delivery when glucose levels fall below a preset threshold.

Revenue at the group rose 13% year-over-year to $416 million. But investors should note that although the MiniMed 530G doesn't have much competition at the moment, Johnson & Johnson's Animas division and DexCom have a competing device, the Vibe, which could be approved later this year in the U.S. The Vibe is already available in Europe, Australia, and Canada.

If that happens, growth at the diabetes group could stall out, forcing Medtronic to accelerate the launch schedule of second generation devices like the MiniMed 640G, a closed-loop system which will arrive in Europe in April 2015.

The Foolish takeaway
In conclusion, Medtronic delivered another solid quarter, showing steady growth at its core businesses in line with industrywide trends, and exhibiting strong growth in newer ones.

Demand for its cardiovascular products will likely remain robust, and I would expect its spine business to recover along with the rest of the industry. Newer diabetes products should also help it maintain its lead over its rivals, which are still struggling to gain market approval in the U.S. Looking further ahead, the Covidien acquisition could bolster Medtronic's bottom line with a tax inversion, as well as diversify its portfolio with additional medical devices that complement its core businesses.