Dreams die hard in Atlantic City, New Jersey, a city that's had to be resuscitated many times over the past century. With the second bankruptcy in as many years of the ultra-high-end Revel casino, the fourth one to close down this year in the area, the East Coast gambling mecca looks like it's going to need yet another resurrection.

Unlike Las Vegas, which seemingly gains new heights on each rebirth, Atlantic City remains the same hardscrabble, gritty, urban environment it's always been. Venture off the world-famous boardwalk and you're immediately cast into a crime-ridden city that's not safe to wander too far into. Whereas violent crime well exceeds the national averages, crimes against property run about the same as anywhere else, but perhaps that's because, as a former governor once quipped, "There's nothing to steal."

Gambling hasn't changed that, and gaming revenues have been on a long, steady slide. The rate of loss may be slightly improving, but the hemorrhaging of gambling dollars to other states continues unabated. Total casino "win," or a casino's total revenues,  has plunged 45% from its peak in 2006, amounting to just $2.86 billion last year , and subtracting the loss of the Atlantic Club, which closed down in January, it's lost another 2.6% over the first seven months of 2014.

What Atlantic City faces is a surfeit of competition. Legalized gambling has exploded all around the Garden State, in Delaware, Maryland, New York, and Pennsylvania, not to mention the still strong pull from Las Vegas and international locales like Macau. It's given new meaning to Benjamin Franklin's old jibe against the state that it was a keg tapped at both ends. Now the gambling spigots have opened on all sides. 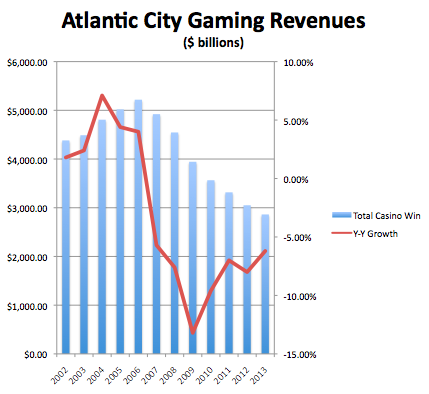 The Revel was meant to stanch the bleeding. It was designed to attract a different kind of gambler with its emphasis on luxury, and when the $2.4 billion project opened in April 2012 --  the first casino in Atlantic City to open since the Borgata opened in 2003 -- it was with high hopes it could turn things around, though one of its financial backers, Morgan Stanley, abandoned the project before it was even completed.

Of course, it didn't help that Hurricane Sandy blew through town that same year and forced the Revel to close down for five days. An inauspicious start to be sure.

Like it's not even there... just as it soon won't be. Photo source: Revel Resorts.

Yet it was unable to ever bring in such sustained levels of high-roller revenue. Through July 31, its total casino win this year was $85.86 million, a 5.9% increase from the year before, but  that still represents one of the lowest hauls among the city's casinos. In comparison, the Borgata, which is a joint venture of MGM Resorts and Boyd Gaming, realized revenues of $364.2 million, up 1.2% year over year and tops among  A.C.'s 11 gambling halls, followed by Harrah's at $202 million. 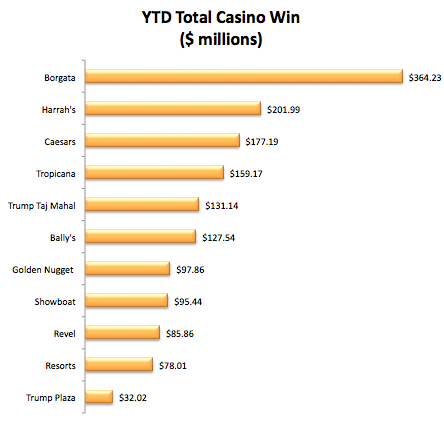 Part of the problem for Revel and the other casinos is that Atlantic City isn't a tourist destination per se, but rather a day-trip outing. There are hundreds of miles of Jersey shoreline for beachgoers to choose from (Revel's ocean-facing vistas certainly didn't do it any good), and now with a plethora of gambling options in surrounding states, luring gamblers in becomes all that more difficult for it. 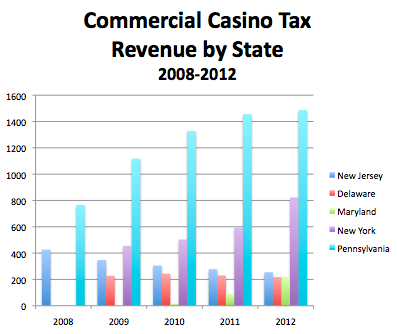 New Jersey's Governor Christie took over the city's tourism district four years ago with a five-year timetable of reversing its decline, and gave Revel some $261 million in tax credits in 2011 to get the moribund project moving again. Not much has really changed since then, and arguably things have only gotten worse.

Unlike the renaissance taking place in Las Vegas, its East Coast rival appears an empty shell of its former self, or at least of the promise it held of what it could be. The Atlantic Club, as mentioned above, closed down earlier this year, the Showboat will close at the end of summer, and the Trump Plaza Hotel & Casino will be gone in September.

According to a report by Richard Stockton College, over 9,500 jobs will be lost between the four casinos and almost $260 million in lost earnings.

Yet even within the demise of Revel, hope springs eternal. One of the plans being broached for the megafacility is to turn it into condominiums, though retrofitting a casino for living quarters seems a daunting task.

And while it may be something to brag about for the city's fathers to say it hosts a dozen or more casinos, in the current competitive climate maybe even eight casinos is too many. Losing another one or two could mean a loss of some prestige, but it will make Atlantic City's remaining gambling halls that much stronger.

This may have been a big bet  for the state and the city that went sideways on it, but it could lead once more to Atlantic City's latest and perhaps best resurrection yet.