Please ensure Javascript is enabled for purposes of website accessibility
Log In Help Join The Motley Fool
Free Article Join Over 1 Million Premium Members And Get More In-Depth Stock Guidance and Research
By Arjun Sreekumar - Aug 24, 2014 at 11:07AM

Despite a sharp reduction in OPEC oil supplies since 2011 and growing geopolitical risks, oil prices have fallen precipitously in recent weeks.

Since 2009, oil prices have enjoyed a prolonged period of remarkable stability characterized by annualized volatility significantly below its long-term average. And though volatility has ticked up markedly in recent months due to the escalating conflicts in Russia and Iraq, oil prices haven't risen much above $115 a barrel and have actually declined sharply in recent weeks.

What's really remarkable about this recent decline is that it occurred despite the fact that nearly 3.5 million barrels per day of global oil supplies -- representing about 4% of daily output -- have gone offline since the beginning of 2011. Here's a chart from the U.S. Energy Information Administration that shows the severity of recent years' supply disruptions: 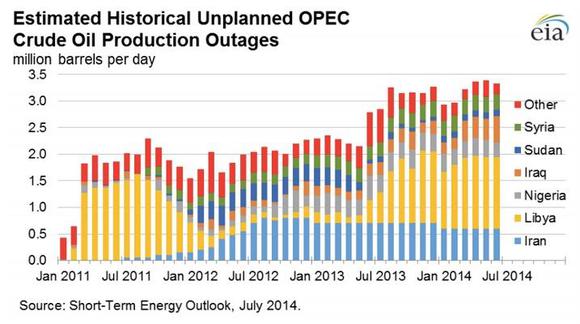 So, why haven't oil prices spiked? It's mainly because these supply disruptions in places like Libya, Iran, and Nigeria have been offset by the rapid growth in U.S. crude oil production over the same time period. Thanks to a combination of horizontal drilling and hydraulic fracturing, U.S. oil production surged from roughly 5.6 million barrels per day (bpd) in 2011 to nearly 7.5 million bpd in 2013.

Combined with output increases from Saudi Arabia and other large producers, this nearly 2 million bpd increase has helped negate the impact of production losses from other key oil producing regions, lending unparalleled stability to global oil prices. Indeed, Brent price volatility in 2013 was the lowest it has been since the oil markets were deregulated in the early 1970s.

But why have prices started to fall recently?
While that explains much of the stability in oil prices over the past few years, you might still be wondering why prices have fallen in recent weeks, especially given the stampede of scary geopolitical developments. This, I believe, is due to a few key factors.

First, U.S. and EU economic sanctions against Russia are unlikely to have a meaningful impact on its level of exports, according to the International Energy Agency (IEA). While the sanctions, which are intended to cut off Kremlin-controlled firms' access to Western capital, could impact long-term production growth, they probably won't impact supplies in the near and medium term, the agency said.

The same goes for Iraq, OPEC's second-largest oil producer. The sectarian violence perpetrated by Sunni militants has largely been confined to the northern part of the country, far from its main oil-producing regions in the south and in Kurdistan. As long as the violence doesn't spread to these regions, Iraq's near-term oil production should be safe. At least that's what the markets perceive.

And with the U.S. having commenced airstrikes against the rebels, investors are even more confident that Iraqi production and exports won't be meaningfully affected. Indeed, the price of Brent actually fell after announcements that the U.S. began bombing rebel-controlled territories in northern Iraq because it signaled to the markets that the U.S. is determined to keep oil prices stable.

Bearish fundamentals
With geopolitical risk to supplies perceived as low, the focus is back on fundamentals, which are bearish. OPEC supplies are as robust as ever. They hit a five-month high of 30.44 million bpd in July, led by increased production from Saudi Arabia, the cartel's largest producer, and Libya, where two major crude export terminals were recently reopened.

An upbeat production forecast for the U.S. provides additional support from the supply side. Meanwhile, on the demand side, markets are concerned about slowing global economic growth that could constrain demand for petroleum. Hedge funds also recently reduced their bullish bets on Brent to the lowest level in six months, leading the benchmark to near its lowest level in 14 months.

The bottom line
In a nutshell, global oil supplies are plentiful, demand is looking like it could be pretty weak, and the risk of supply disruptions is perceived as low. Barring a major supply disruption, investors can expect oil prices to remain under pressure in the near term. The longer term, however, could be an entirely different story if the security situation in Iraq deteriorates further.