Years of patience are finally paying off for Amgen (NASDAQ:AMGN) shareholders, whose shares jump by more than 160% over the past three years. 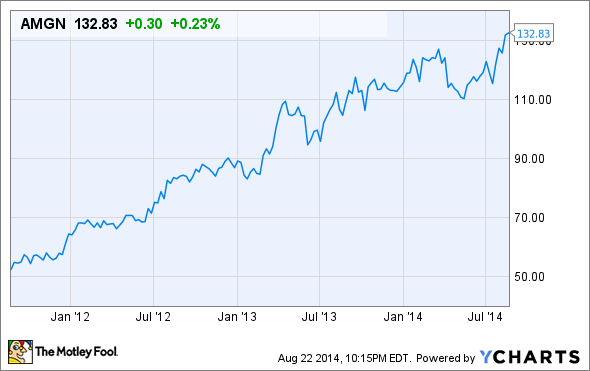 Amgen's shares have rallied on the prospect of delivering late-stage data on 10 new compounds before the end of 2016, as well as its aggressive purchase of Onyx Pharmaceuticals for $10.4 billion, which Wall Street expects will put some pep in Amgen's step.

But what stakeholders may fail to realize is that headwinds exist in Amgen, as they do with every stock, which could knock it off its recent pedestal and send its shares lower. Of course, you won't find these headwinds from reading a simple earnings report. Instead, you need to look deeper, beyond just the headline figures, to discover what factors might work against Amgen achieving its goals.

Today we're going to look at three catalysts that I suspect are most likely to send Amgen's stock lower. But before we do that, it's important to remind readers that stocks can go up just as easily as they can go down. As you read this bearish thesis here today, keep the other side of the coin in mind, and understand that just because a company faces challenges doesn't mean that it necessarily will see its share price head lower.

You are reading that correctly. Just as multiple myeloma drug Kyprolis was singled out as one of the primary catalysts that could send Amgen higher, it's also a factor that could lead to its stock falling considerably from its current price.

Amgen's Kyprolis, which was acquired when it bought Onyx Pharmaceuticals, is on pace to deliver close to $350 million in revenue this year, but is looked upon by Wall Street as a drug with peak annual sales potential of between $2 billion and $3 billion. In order to hit these lofty annual figures Kyprolis needs to see its label expand beyond its current Food and Drug Administration-approved indication of treating third-line multiple myeloma and into second-line multiple myeloma and small-cell lung cancer.

"What might the hold-up be in that expansion?" you ask? The answer to that lies in the company's recently announced FOCUS study. As Amgen noted earlier this month, Kyprolis missed its primary endpoint of a statistically significant improvement in overall survival in second-line multiple myeloma patients, although in the ASPIRE study it showed a notable improvement of 8.7 months in progression-free survival over the control group. In addition, even though treatment discontinuation was similar in both arms of the FOCUS study, there was a notable increase in renal adverse events in the Kyprolis arm during the late-stage study.

Though Amgen feels confident the ASPIRE data should be enough to get Kyprolis the critical second-line indication in the U.S. and EU, the European Medicines Agency is a particular stickler when it comes to experimental drugs demonstrating improvements in overall survival. This could make an approval tougher to come by, especially in Europe, and it could stymie Kyprolis' sales growth.

Questionable faith in Amgen's management
The second factor that I suspect could play a role in pushing Amgen's stock lower is investors' lack of faith in management to take the company down the right path.

On one hand, Bob Bradway, the current CEO of Amgen, has only been leading the company as CEO since May 2012. In the time since he took over shares have doubled. A great number of existing shareholders won't complain about that performance.

But look back more than three years and you'll see a more mixed picture. 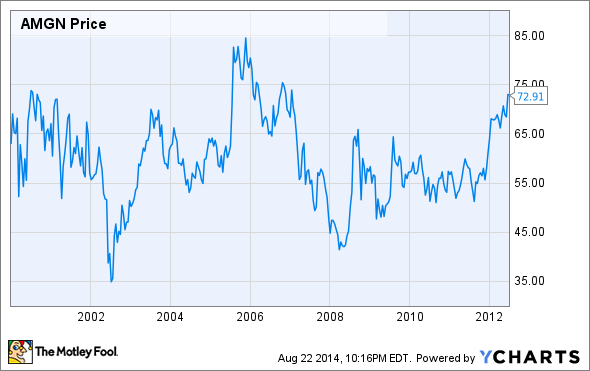 Between 2000 and 2012 Amgen investors essentially witnessed their stock trade nominally flat. Of course, Amgen was also buying back shares and, as we've seen in recent years, paying out a dividend to provide a reward for faithful investors.

Although Bradway was clear during the company's conference call that Amgen is a well-oiled machine from both an internal and external pipeline status, the historic figures speak for themselves and point to a management team that's failed to exceed investors' expectations for a long time.

Little ex-U.S. exposure
Lastly, and this topic gets very little exposure, Amgen is heavily reliant on the U.S. for its growth. In fact, I'd say too reliant.

In the second quarter, Amgen reported total product sales of $4.95 billion, an 8% increase over the previous year. The company's U.S. sales, however, accounted for $3.76 billion, or 76% of total sales.

It's not all bad news that Amgen's largest market is the United States. In fact, a good number of drugmakers would refer to the U.S. as their primary revenue source. Yet Amgen's rest-of-world category, which includes Europe and other emerging markets, managed just $1.19 billion in product sales. This ROW category is what includes the possibility of faster-growth markets than the U.S., and also allows Amgen some geographic diversity in case another economic downturn in the U.S. causes consumers to cut back on spending.

Let's not forget, as well, that insurers in the U.S. are potentially seeing their margins pinched by the implementation of the Affordable Care Act (you may know it better as Obamacare). In response to the uncertainties associated with Obamacare and the expectation of higher medical costs, insurers and pharmacy-benefit management companies have gone on the offensive against big pharma and biotech companies in an effort to keep drug prices from soaring. In some cases it's resulted in select insurers dropping coverage on popular drugs because their selling price was simply too high. Being so focused on the U.S. market Amgen is potentially susceptible to these pricing pressures, which full-well could weigh on its stock.

Tying things together
Amgen's been a welcome holding for investors over the past three years, but these three headwinds might imply that it's run is about to come to a grinding halt. With plenty of late-stage catalysts on the horizon, but the quality of its Onyx purchase, its lack of geographic diversity, and its history of weak growth also in the forefront, it gives current investors, and those on the outside looking in, some serious catalysts to mull over.