Chevron's Gorgon LNG project has been documented for years as a problem for the company. Most of that attention, though, has gone to the blowout of the budget. Sure, this is an issue that could impact profitability, but there is an even bigger issue that has emerged over the past several years, which could have an even more profound impact on this project. Let's take a look at what has changed since Chevron and its partners -- ExxonMobil and Royal Dutch Shell -- made the decision to go forward with the Gorgon facility, why it's struggling to meet its goal, and what investors should look for to determine how much it will impact the company long term.

Didn't see that coming...
Back in 2009 when Chevron made the final investment decision on the Gorgon LNG project, it looked like a slam dunk. Global demand for LNG was on the rise, especially in the Asia-Pacific region where Chevron estimated that total LNG demand would increase by 100 million tons per year by 2025. On top of that, Australia looked to be in an advantageous position because it could undercut transportation costs from other major LNG export regions such as Qatar. So even though the company estimated slightly higher costs for construction and gas supply, it could recoup the difference in the shipping costs.

Unfortunately for Chevron, that idea has been completely turned on its head thanks to the increasing costs of the facility as well as the emergence of American shale gas production. Originally estimated to cost $37 billion, Gorgon's final bill is looking like it will be closer to $54 billion -- half of which Chevron is responsible for. Much of this has to do with the fact that this project is in a relatively remote part of Northwestern Australia, so on top of the massive facility costs, Chevron and its partners have had to foot the bill for all the ancillary infrastructure as well.

With that surge in production has also come a slew of proposals to export LNG from the U.S. Since Chevron's decision to invest in Gorgon in 2009, shale gas production in the U.S. has increased three-fold, which has led net gas imports to the U.S. to be cut in half and caused the average Henry Hub spot price for gas to tumble below $4 per million BTU. Very soon, we will have enough excess production, and companies have lined up to be exporters of that excess. In less than five years there have been about 130 million tons per year worth of proposals for LNG export facilities. Most have already filed with federal regulators. 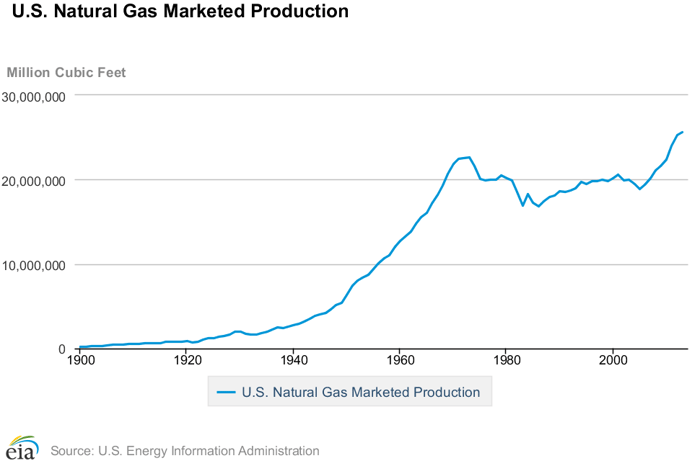 Reducing returns?
The reason that this could have such a profound impact on Chevron is that these U.S.-based facilities can undercut Gorgon on price. Analysts at Deutsche bank estimate that the breakeven cost for an LNG shipment offloaded in Tokyo is $2 less per million BTU from Cheniere Energy's Sabine Pass facility in the Gulf of Mexico than from Gorgon. 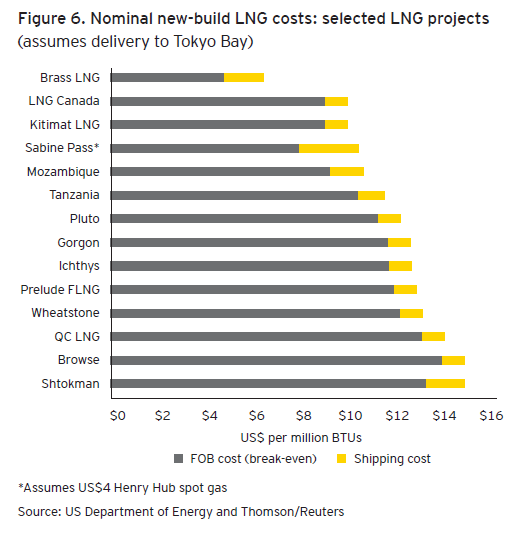 This is a problem for Chevron in two ways:

Chevron had been hoping to get 85% of the facility's capacity locked up in long-term supply contracts with fixed fees. However, U.S.-based LNG exporters have locked up over 30 million tons per year in supply contracts while Gorgon has been sitting at that 65% level for quite some time.

The reason that investors should pay close attention to this situation is that Gorgon and the Wheatstone LNG facilities represent a huge part of Chevron's growth over the next several years. Its 47.5% operating stake in Gorgon is equivalent to bringing on 175,000 barrels of oil equivalent per day and -- if it can secure that 85% contract rate -- should add about $4 billion in annual EBITDA. If it is operating under that 65% contract rate and is forced to sell the rest on the spot at competitive rates with other LNG sources, that number could drop significantly and the rate of return on the project could decline. Considering that Chevron's return on invested capital has been on the decline over the past several years already and stands at 13.5%, bringing on a new project that can't boost that level would really sting.

What a Fool believes
This is one of the biggest issues for investors when it comes to integrated oil and gas companies. Most of them need to make investment decisions many years in advance, and the conditions that made that original investment seem lucrative can change as the project is being developed. It's unlikely that the Gorgon LNG facility will break the company, but underperformance from this facility could significantly impact Chevron's profitability in the long run. If you are an investor in Chevron or are looking at it as a potential buy, watch whether Chevron is able to secure a couple extra contracts to boost the contract rate at Gorgon to that 85% rate, as this will be important for the future profitability of the company.

Could Chevron End up With a $27 Billion Black Eye From This Project? @themotleyfool #stocks $RDS.A $XOM $CVX $RDS.B Next Article
Current