At IFA 2014 in Berlin Samsung (NASDAQOTH: SSNLF) unveiled the Gear VR, a new version of the Oculus Rift that uses the Galaxy Note 4 as its display.

The Gear VR is a visor with a docking slot for the 5.7-inch Note 4. The device, which is equipped with a stereoscopic 3D display, head-tracking sensors, and an external touchpad, transforms the Note 4 into a virtual reality headset for Android apps and games.

Samsung has not announced the final price of the Note 4 or visor yet, but both devices should launch in the U.S. next month. Oculus has stated that the device's initial release will be an "Innovator Edition," a beta version for developers and enthusiasts, rather than the final consumer-facing product. Oculus VR, which was acquired by Facebook (NASDAQ:FB) for $2 billion in July, sold the first generation Oculus Rift to developers for $350.

Sixteen games have been announced so far for the Gear VR, including Temple Run VR, Marvel Superpowered, and Omega Agent. The Gear VR will also come with Oculus Home (a content store), Oculus Cinema (for viewing 2D and 3D videos), and two ways to view panoramic media -- Oculus 360 Photos and Videos.

Can the Gear VR finally take virtual reality gaming mainstream and change the definition of mobile gaming, or will the device still only appeal to hardcore gamers?

How Samsung could kick-start the VR gaming market
Samsung has three things going for it -- its market clout, the backing of developers, and the Gear VR's practical design.

Samsung controls roughly a fourth of the world's smartphone market, according to IDC's second quarter numbers. Therefore, when Samsung shifts gears with hardware, software developers pay attention. That's why studios like Imangi, Harmonix, and Fireproof Studios have lined up to launch native VR games for the platform. By comparison, many of Oculus' Rift games were ports of PC games, lesser-known games, or technical demos.

With mainstream titles like Temple Run VR showcasing the Gear VR's capabilities, Samsung and Oculus have a rare chance to convert casual mobile gamers -- many of whom probably haven't even heard of the Rift -- into VR gamers. This would be a complete departure from Oculus' previous strategy of promoting the Rift as a hardcore gaming peripheral.

Simply put, the Gear VR could be to VR games what Nintendo's (OTC:NTDOY) original Wii was to motion controlled games. 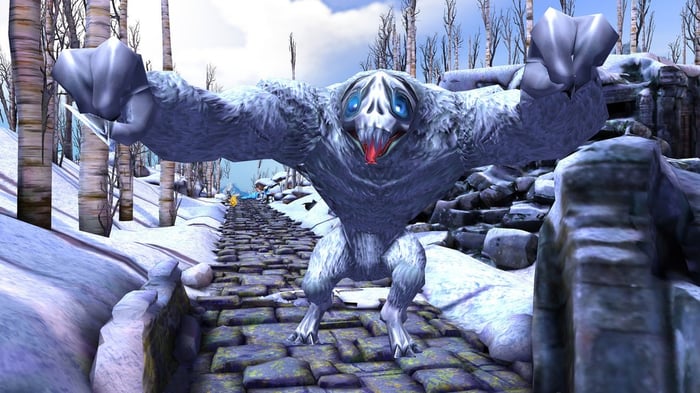 Speaking to CNET, Amir Rubin, head of motion control technology firm Sixense Entertainment, expects Samsung to sell up to three million Gear VR units before the end of the year and up to 20 million in 2015. That would place the Gear VR in the same league as Nintendo's 3DS and Sony's (NYSE:SONY) PS Vita, which have respectively sold 45.5 million and 8.8 million units worldwide. Meanwhile, research firm KZero forecasts VR revenues to rise from nearly nothing this year to $5.2 billion by 2018.

But let's not get ahead of ourselves yet
Yet there are also strong counterarguments against those rosy expectations.

First of all, the Gear VR is only compatible with the Note 4, and not Samsung's other smartphones. Its predecessor, the Galaxy Note 3, sold 10 million units by the end of 2013, but that only accounted for a tenth of Samsung's premium smartphone line. While newer Gear VRs might eventually be compatible with other Samsung devices, the initial Note 4 restriction could throttle sales.

Another problem is that VR games generally require the gamer to remain in a stationary position for safety, while mobile games are designed to be played on the go. Since wearing the vision-obstructing Gear VR in public is awkward (and possibly dangerous), it would likely be restricted to home use. The Gear VR might have a better chance as an alternative home console, but Sony recently expanded into this field by connecting its competing Morpheus VR headset to the PlayStation 4.

Last but not least, developers could prefer making touch-based games for all Android devices to making Gear VR games for a niche audience. That would kill the momentum that Samsung needs to sell millions of Gear VR units.

The Foolish takeaway
The Gear VR will require a conversion of casual gamers, solid developer support, and a change in attitudes about donning headsets in public to become a marketable gadget.

A practical modular design and a lower price point could encourage more customers to try out the technology, but it's going to take aggressive marketing and deeper software partnerships to convince gamers that the Gear VR isn't just a fancy toy.