When Whole Foods Market (NASDAQ: WFM) announced earlier this month that it's rolling out grocery delivery and in-store pickup in 15 cities through San Francisco-based Instacart, I started thinking about the likelihood of the service surviving long enough to become an established tool for consumers -- and living up to my long-thwarted hopes of avoiding regular treks to the store. 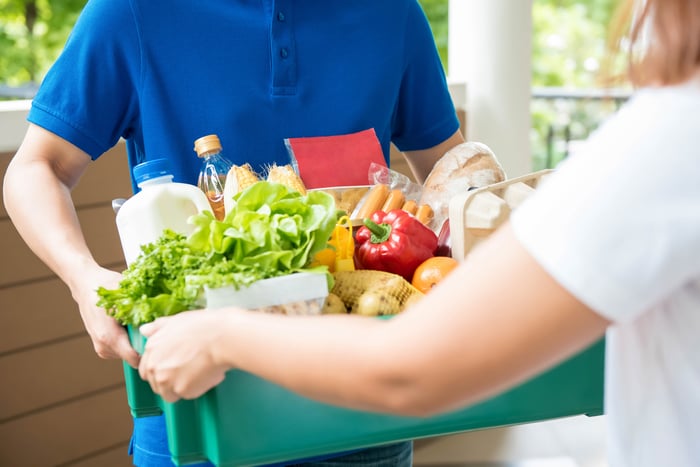 Online grocery shopping seems like it should be overwhelmingly popular and relatively simple to execute, yet companies have tried for years, and collided with a number of obstacles along the way. Dot-com wreck Webvan is the obvious cautionary tale here. The company, now owned by Amazon, blew its pre-bubble billion-dollar valuation building expensive warehouses in the two dozen cities where it intended to deliver groceries, only to run out of funds midway through 2001.

Competitor Peapod failed in an early bid to move into sprawling cities like Austin, Houston, and Dallas -- markets it left in late 2000. Peapod is now owned by Stop & Shop and operates in its Northeast and Midwest markets.

Fourteen years after Peapod's departure, Austin, along with Boston, is the first market where Whole Foods and Instacart will ramp up their service to include in-store pickup and one-hour delivery. In the coming months, Whole Foods and Instacart plan to expand their in-store pickup service to all 15 cities where Instacart will be delivering for the grocer: Atlanta; Austin; Boston; Boulder, Colo.; Chicago; Denver; Houston; Los Angeles; New York; Philadelphia; Portland, Ore.; San Francisco; San Jose, Calif.; Seattle; and Washington, D.C.

It seems Instacart has learned well from its predecessors' mistakes -- and it has the advantage of technology that wasn't available during the Webvan era. Here are six reasons Instacart and Whole Foods can make grocery delivery and in-store pickup work.

1. Instacart is keeping its overhead low
Rather than building warehouses and essentially duplicating the infrastructure that Whole Foods already has in place, Instacart uses personal shoppers at stores to gather items and deliver them.

2. An analytical approach to dealing with suburban sprawl
Besides competing with Peapod in densely populated markets such as Boston and New York, Instacart also operates in spread-out cities, including Austin, Houston, Atlanta, and Los Angeles. Larger cities typically require longer drives, more time spent on each delivery, and higher costs.

In an email, Instacart spokeswoman Michelle Faulkner said the key to overcoming those issues is "analytics!" According to Faulkner: "Instacart collects all sorts of data on orders, inventory, and shopper location and has become expert on matching orders with shoppers and stores to minimize travel time and ensure speedy delivery. This is a big difference between now and 15 years ago -- data and data analysis capabilities."

3. A target market that's cool with paying for convenience
Whole Foods already has outstanding average weekly sales per square foot, close to $1,000, because there are plenty of people in its markets who are happy to pay a premium for artisanal olive oil, organic produce, and the other higher-end items that Whole Foods sells. These shoppers aren't likely to gnash their teeth over Instacart's product markups, delivery fees, and tips -- especially if they live in a city where a trip to the store may involve a time-consuming drive, plus time in the aisles.

4. Smartphone communication between shoppers and customers
Webvan launched at a time when we didn't have smartphones grafted to our hands, and instant communication yields better customer satisfaction. I ordered a Whole Foods Instacart delivery this week to see how it went. The Instacart shopper called me from the store when she had a question about substituting an out-of-stock seeded watermelon for a smaller, but pricier, seedless melon. When she left the store, I got a text with her estimated time of arrival based on traffic and distance. That narrowed down the original delivery window from an hour to just a few minutes.

After she dropped off my groceries, I got an updated email receipt reflecting the seedless melon, and a text asking me to rate the experience (and to add data to Instacart's stash).

5. One-hour delivery could make Whole Foods a viable alternative to pizza night
One-hour delivery will cost a few bucks, but it gives shoppers the option to order Whole Foods prepared meals or dinner fixings instead of a delivery pizza. Kids may be disappointed, but time-pressed parents who want to provide healthy meals will be relieved.

Whole Foods says customers' first Instacart delivery is free, and after that, the cost is $5.99 for one-hour delivery (or $3.99 for two-hour delivery). If you buy a $99 annual Instacart Express membership, you'll get free delivery on any order over $35.

6. In-store pickup offers another way to save time for customers
The soon-to-launch in-store pickup option will be good for commuters who can stop by the store on the way to or from work. Faulkner says the in-store pickup fee will be $1.99. People who might otherwise skip or put off a trip to the store for lack of time will be able to zip in, pick up what they need, and get out, even at busy shopping times.

A draw for those who'd rather click than shop
If Whole Foods' delivery program performs well in the 15 cities where Instacart operates, it's likely the partnership will grow as Instacart moves into more markets. Faulkner says that Instacart intends to be in "at least 17" cities by year's end, but for now, the company isn't saying which new cities are on its list. And if Whole Foods and Instacart can provide consistent service, they may capture the dollars of shoppers who are happy to buy from Whole Foods, as long as they don't have to do the shopping themselves.