Pioneer Natural Resources (NYSE:PXD) is the best performing energy stock in the S&P 500 since 2009. However, its best days could still lie ahead. It holds one of the largest acreage positions in the Permian Basin. It's a position that Pioneer Natural Resources estimates holds upwards of 10 billion barrels of recoverable oil and gas. That being said, a compelling story isn't always a reason to buy a stock. So, let's take a closer look to see if the stock price is as compelling as the story.

Pioneer Natural Resources plans to use its prime position in the Permian Basin to fuel 16%-21% compound annual production growth through 2016. That puts the company on pace to double its 2013 production by 2018, as noted on the following slide. 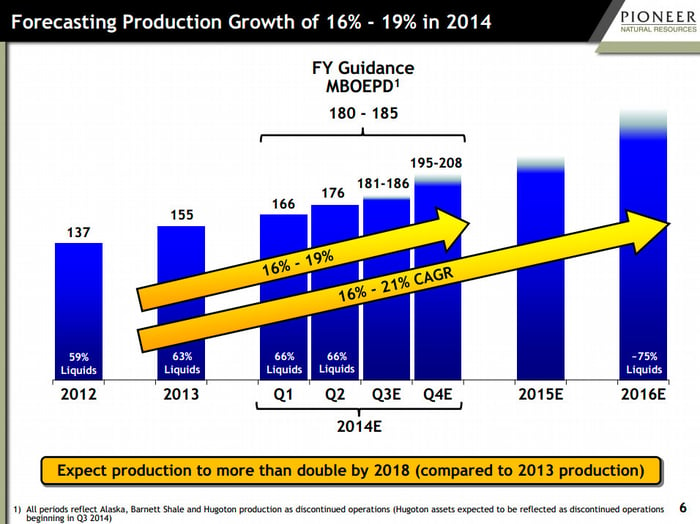 What's important to note here is that the company's growth is focused on higher-margin liquids. The company's production mix is expected to go from 63% liquids in 2013 to 75% liquids in 2016. Over time this will help push the company's cash margins higher as its focus will be delivering production growth from the Spraberry/Wolfcamp, which has very high margins as noted on the following slide. 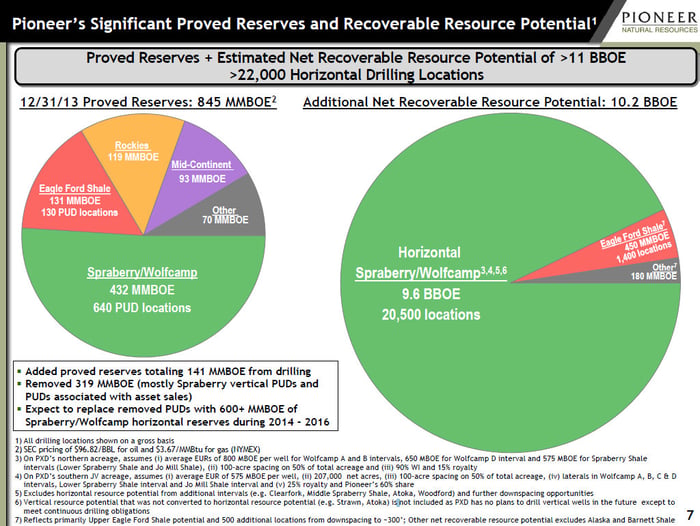 Investors need to question how certain those resources are and then figure out how to value that potential.

As of the end of last year, Pioneer Natural Resources had just 845 million barrels of oil equivalent, or BOE in proved reserves. These reserves had a PV-10 value, or the pre-tax present value of future net cash flows discounted by 10%, of $9.2 billion. However, the company's current enterprise value is more than three times that amount. This means investors are placing significant value, well over $20 billion, on the company's estimated 10.2 billion BOE of resource potential that might or might not actually be recovered. The worry here is that investors might be placing too much value on the potential of those resources to make the stock not worth buying today.

Drilling down into the valuation

The only way to really take a deeper look at how much value investors are placing on these potential reserves is to look at how investors are valuing Pioneer Natural Resources relative to its peers. I'm going to compare the company against top independent oil and gas peers EOG Resources (NYSE:EOG), ConocoPhillips (NYSE:COP), Devon Energy (NYSE:DVN) and Chesapeake Energy (OTC:CHKA.Q) across a broad spectrum of valuation multiples. Here's what that looks like.

What we find is that investors are placing a real premium on Pioneer Natural Resources. What really stands out is the fact that the company is trading at a very, very rich enterprise value to EBITDA multiple for an energy company. This is despite the fact that all four competitors have substantial potential recoverable oil and gas resources too. Just as an example, ConocoPhillips had 8.9 billion BOE of proved reserves as of the end of last year. However, the company is sitting on total resources totaling 43 billion BOE. While the ratio of proved reserves to resource potential is much higher at Pioneer Natural Resources, so is the uncertainty that those resources will one day become proved reserves. So, investors really are placing a hefty premium on the resource potential of Pioneer Natural Resources.

Now let's check out how its current valuation compares to its historical valuation.

Here we see that investors aren't just placing a big premium on Pioneer Natural Resources compared to its peers but also compared to the company's own historical average.