There are three basic things investors in any stock want to see: more revenue, lower costs, and more cash returned to shareholders. In the case of United Continental Holdings (NASDAQ:UAL), shareholders are spoiled with all three. Each of these figures has been going in the right direction recently, and if the company's forecasts are accurate, all three will improve and could lead to an even higher share price. 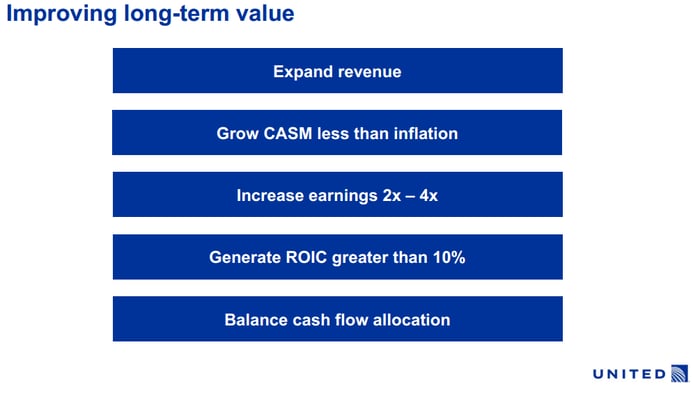 Mile-high revenue
For the second quarter, United Continental reported a revenue increase of 3.3% to $10.3 billion. Passenger revenue leaped 3.6% to $9.0 million. Per passenger ancillary revenue jumped 7.9% to $21. United's Chief Revenue Officer Jim Compton stated, "We are beginning to see the benefits of the changes we're implementing to our network and revenue management processes. We have more work to do, however, and will continue to make the appropriate adjustments to accelerate our revenue growth."

One of the key ways United is working to expand revenue is from installing lighter slimline seats. That's a fancy way of saying squeezing more bodies into the same size flying tube. You thought fights are already tight enough? They're in the process of getting tighter, but just adding a few extra passengers into a flight means more revenue with not much additional cost. At the same time, United plans to expand ancillary revenue even further with more service options.

Two billion reasons wrapped into one
Cost savings can really make a huge difference to the bottom line. All things being equal, every $1 a company can eliminate in cost is $1 of pre-tax profit. United has implemented a program called "Project Quality." This is an all-hands-on-deck across all employees goal of eliminating $2 billion in annual costs by the year 2017.

Analysts certainly seem to be believers. For example for the fiscal year ending December 2015, they expect on average a 30% increase in EPS on only a 3.7% increase in revenue. All those cost savings are expected to blow up the bottom line in a fashion that shows it is much more lucrative than simply selling more tickets. If the plans and hopes turn to reality, the stock could appreciate accordingly.

Shareholders have a rewards program of their own
United announced in July a $1 billion buyback program to be completed in three years. $1 billion is a perfectly even round number so dare I say the internal plans may be more aggressive with an earlier completion and a new one to be announced sooner? In any event, it's a lot of cash.

Consider that the market cap of United is just under $18 billion at the time of this writing. That's nearly a 6% return on this initiative alone. Likewise, unless the share price shoots up first, it will retire nearly 6% of the shares outstanding, giving an automatic boost to all EPS figures.

Personally I like buybacks because of the message of confidence they tend to convey from management which brings a potentially higher P/E multiple as a company performs. CEO Jeffrey Smiesk was more direct about this message in the earnings conference call. He stated, "[The buyback announcement is] perhaps the clearest demonstration of our confidence and our ability to achieve the goals of [our] long-term plan." It sounds like he doesn't expect UAL's results disappoint the Street.