In recent years, technology giant Hewlett-Packard (NYSE:HPQ) has had a pretty consistent record when it comes to M&A activity. Its biggest acquisitions have almost all been disasters.

Despite this terrible track record, HP may be looking to get back into the megamerger game. Reports have surfaced twice in the last few months that HP was on the verge of signing a big M&A deal: first with Rackspace, and now with EMC (NYSE:EMC).

Shareholders should hope that these reports have exaggerated HP's interest. Investors will probably be better off if HP continues executing its current strategy rather than attempting another big acquisition.

A history of failure

Since the year 2000, HP has made 3 huge M&A deals, valued at more than $10 billion each -- as well as a slew of smaller deals. None of the biggest deals have been remotely successful.

HP's $25 billion acquisition of Compaq didn't work out in the long run (Photo: The Motley Fool)

First, HP acquired rival PC-maker Compaq in 2001 in a $25 billion all-stock deal. Nearly 6 years later, the deal looked like it might be a success. However, the PC industry has never recovered from the Great Recession, and that was Compaq's biggest line of business. In 2012, HP wrote down the value of the Compaq acquisition by $1.2 billion.

Next, HP spent nearly $14 billion to acquire IT services giant EDS in 2008. However, EDS turned out to be a bloated organization and faced rising low-cost competition. HP wrote down the value of that acquisition by more than 50% -- about $8 billion -- in 2012.

HP's folly peaked in 2011, when it acquired British software firm Autonomy for $11 billion. This time, it took HP just a year to write the deal down by a stunning $8.8 billion. HP is now embroiled in litigation with Autonomy's former leaders, alleging that they had cooked the books to inflate Autonomy's revenue and gross margin.

Considering HP's propensity to swing for the fences and miss, shareholders were relieved when new CEO Meg Whitman began preaching a no-big-acquisitions policy a few years ago. As recently as last summer, Whitman stated that HP was not interested in acquisitions with a price tag of more than $1.5 billion. However, the winds may be changing.

HP may be getting back into the market for big acquisitions (Photo: The Motley Fool)

This spring, Rackspace -- one of the largest cloud-computing pure-play firms -- announced that it was considering "strategic alternatives." (That's banking industry jargon for looking into M&A possibilities.) HP was frequently mentioned as a possible suitor in press reports.

While HP never officially confirmed its interest in Rackspace, CFO Cathie Lesjak stated in August that HP had not bought back many shares in the prior quarter due to "material non-public information." That's a clear indication that HP was considering a big M&A move, although nothing came of it.

Rackspace is a big player in cloud services: an area where HP wants to grow. However, Rackspace faces withering competition from Amazon.com. Moreover, while its market cap is currently about $4.5 billion, it was valued at more than $7 billion in late 2013, and HP probably would have had to pay at least that much to close a deal. 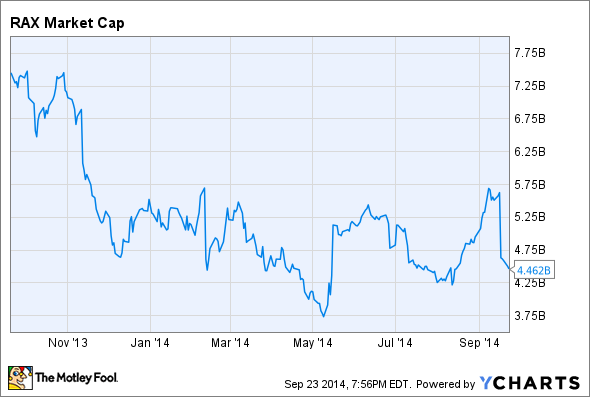 Compared to the size of a potential deal with EMC, $7 billion looks cheap. EMC is currently valued at about $60 billion -- just a tad less than HP. An HP-EMC tie-up would thus be a merger of equals. In fact, it's possible that shareholders of each company would have held exactly half of the combined company's stock if recent discussions between HP and EMC had led to a merger.

That wouldn't be good news for HP investors. HP stock trades for just 9 times forward earnings, whereas EMC shares trade for 14 times forward earnings. The valuation gap would be even higher in the case of a 50/50 ownership split. This means that EMC investors would see an immediate jump in EPS, while HP shareholders would face a drop in EPS.

For HP shareholders to do well in a merger with EMC, the combined company would need to find billions of dollars of synergies. Based on HP's acquisition track record -- lots of lemons and not much lemonade -- a successful integration might be too much to hope for.

The ironic thing is that HP has plenty of tools to drive profit growth without resorting to a megamerger. HP shares trade for less than 8 times free cash flow, so the company can grow EPS simply by directing that cash toward share buybacks.

Additionally, HP's services business, which represents more than $20 billion of annual revenue, posted a 2.5% pre-tax margin through the first 3 quarters of FY14. However, HP believes this business can sustainably earn 7%-9% pre-tax margins, which would represent roughly $1 billion in incremental profit. The services division is therefore the primary target of HP's massive cost-cutting program.

HP's best bet is to keep working on its turnaround by nurturing its growth businesses and new products under development, while returning excess cash to shareholders. If HP executives see small acquisition opportunities, they should pursue those deals. But if the only deals available are megamergers, HP investors should pray that the company shuns them.

Is HP About to Make Another Disastrous Acquisition? @themotleyfool #stocks $HPQ $EMC Next Article
Current