Frontier Communications (OTC:FTR) has been on a roll in 2014. The rural telecom and cable TV provider hasn't exactly thrilled investors with fantastic results -- Frontier reported one positive and one negative earnings surprise in the last four quarters -- but shares have soared a market-crushing 46% anyhow. 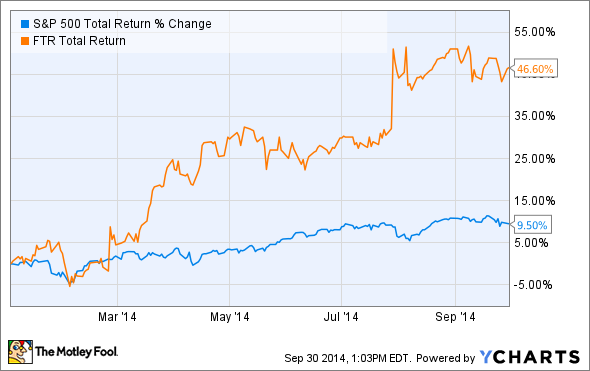 How did Frontier get here, and what's next? I went through the company's latest earnings call to find some clues. Frontier's management provided these five nuggets of insight.

"One catalyst for our results this quarter was an increased emphasis on marketing bundles relative to Q1 when simply broadband was the primary focus.

"We generally maintain a balance in attracting bundled and stand-alone customers each quarter. In Q2, more emphasis on bundles resulted in a product mix with higher billing per customer, and this is reflected in the sequential uptick in residential average revenue per customer."

Let's start with a look in the rearview mirror.

As Wilderotter noted, Frontier customers saw their monthly bills become a little larger in the second quarter. Average monthly revenue per residential subscriber increased by 1%, whether you compare the new figure to the previous quarter or the year-ago period.

Frontier's sales strategy has been aggressively focused on simple broadband products for several quarters. Recently, the sales and marketing teams got orders to start pushing multiproduct bundles instead.

This strategy shift did not produce a huge difference in a single quarter, but it's the normal selling tactic going forward, and the bundle-driven upticks should add up. Frontier might leave a few single broadband service deals on the table, but make up the difference by increasing profit margins.

"Our Internet of Things offerings expanded in Q2 with the addition of the Nest Thermostat. Customers can now remotely monitor and set their heat and air conditioning. This product, along with remote video monitoring security monitoring with our Dropcam product, starts to provide customers with home automation products fully supported by our premium tech support teams at Frontier.

"Watch for continued broadening of these offerings over the coming quarters. The Internet of Things is important because it leverages our broadband capabilities, enhances our revenues, and presents more opportunities to offer our customers a monthly tech support service."

This is a whole new product category for Frontier. Machine-to-machine communications don't provide a significant amount of quarterly revenue yet, but these are early days in that market. Expect Frontier to chase this space with some vigor, especially in the business service segment. Business sales already account for more than half of Frontier's total revenue.

Plenty of room for broadband upgrades

"Over 30% of our activity in the second quarter were speed-tier upgrades, so we are seeing some behavior change in terms of customers taking more speed. But if you look at it, still 75% to 80% of our customers use six meg or less."

For example, Frontier's basic broadband service in many areas is a six-megabit DSL connection for $30 a month. Upgrade to 12 megabits and the monthly bill rises to $40. For $50, Frontier's customers can grab a 25-megabit service in over half of the company's service areas.

But just because Frontier can provide these high-speed services doesn't mean everyone is a top-tier broadband subscriber. The vast majority of Frontier's subscribers still get by with their six-megabit service -- or less.

Converting these low-end customers to higher service speeds could help Frontier drive revenue growth in future quarters. The rising popularity of high-quality digital video services could give the company some negotiating leverage in this effort.

"As we all know the Windstream REIT announcement has attracted considerable attention. Putting a tax efficient structure in place has a lot of appeal. While they have received the private letter ruling from the IRS, as Windstream has mentioned, there are still other hurdles they need to clear to implement this structure successfully.

"As for Frontier, our current top priorities are to deliver on the basic business and ensure a successful and high quality integration of the Connecticut acquisition. We are always looking for ways to optimize our tax structure that compliments our business strategy. We will closely follow Windstream's progress and evaluate the REIT structure based on what we learned from their implementation."

Yes indeed, Windstream Communications' (NASDAQ:WINMQ) plan to become a tax-efficient real estate investment trust sure turned heads around the telecom industry. If Windstream can do it, why wouldn't the same model work for other asset-heavy telecoms?

In fact, when Windstream announced its groundbreaking REIT conversion plan, the company's shares jumped 12% higher overnight -- but Frontier stock soared by an even higher 14%.

So the market already assumes Frontier will follow Windstream into this tax-saving and value-unlocking model. However, Wilderotter doesn't seem so sure.

The company is obviously considering a REIT conversion, now that the cat is out of the bag. Only time will tell if this idea comes to fruition. For now, Frontier is monitoirng Windstream's REIT adventure from the sidelines, much like the rest of us.

What's going on with the Connecticut deal?

"Our initial plans will be to aggressively market U-verse, while upgrading broadband speeds in many of the more rural market clusters. These upgrades will include improving last mile electronics and migrating middle-mile infrastructure to [fiber-optic] ROADM technology.

"We believe we will have an excellent network platform to compete in Connecticut from day one. We remain confident in our ability to close the transaction in Q4.

"The current procedural order has us potentially receiving an order on 10/15. And then we'll take it from there. Obviously, anything can happen as they get that order out."

That's how McCarthy sees the future when Frontier acquires AT&T's (NYSE:T) wireline operations in Connecticut. The $2 billion all-cash deal will be followed by infrastructure investments, as Frontier rolls out fiber-based backbone connections across this new territory.

It's not a done deal, though. After this conference call, Frontier ran into regulatory resistance in Connecticut. The company is now waiting for a preliminary order, overriding a handful of procedural issues. By mid-October, as McCarthy said, the final verdict should be ready.

If you're wondering whether Frontier expects to close this deal, consider this: The company just announced industry veteran Ed O'Connor as vice president of Connecticut sales. The job won't exist unless the AT&T deal closes, but Frontier filled it on Monday anyway. Shareholders are free to draw their own conclusions.