It wants to become a destination lifestyle brand, but without the Swedish meatballs

Maybe other than having to assemble your own clothes, retailer Urban Outfitters (URBN 0.94%) wants its bohemian chic concept Anthropologie to be just like Ikea.

Where the Swedish leader in minimalism entices you to shop by dropping your kids off in a ball-filled playroom and eating your fill of Swedish meatballs and lingonberry sauce, Urban Outfitters is seeking to rebrand Anthropologie as a "lifestyle" choice where you'll want to dine in or get your hair done.

To do so, the retailer plans to expand the size of its stores, to become three times larger than their current 7,100 square foot format. Whether that means they'll have to paint arrows on the floor or hang maps from the ceiling to navigate your way through the store remains to be seen, but it's an audacious plan with the ultimate goal of doubling sales by 2020. 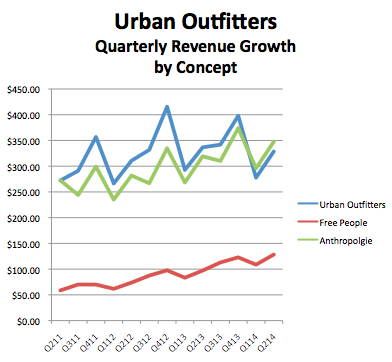 Sales at Urban Outfitters' namesake stores have fallen for four straight quarters, the last two of which were at double-digit rates, which has allowed its Anthropologie stores to take over as the largest concept. Free People, the retailer's third concept, is a little more than a third the size of the other two. The falling sales, though have also seemingly caused the retailer to resort to some dramatic -- yet ultimately offensive -- marketing techniques that reek of desperation.

Which may be why it's experimenting with Anthropologie, and to a lesser extent Free People. These are its growing concepts and with Anthropologie in particular reporting record sales and near-record profits, it intends to invest more in them.

Feeling bloated
The retailer recently unveiled a plan to expand its merchandise selection to fill up the bigger floor plan, setting up store-in-store boutiques that will house different brands, such as its BHLDN wedding brand and the Terrain yard and gardening brand.

Additionally it will expand the home goods offerings Anthropolgie offers so that more than just accenting their apartments with "boho chic" bric-a-brac, customers can fully furnish them. It looks like you'll need more than just a Phillips head screwdriver to assemble it all.

Urban Outfitters' says research shows its shoppers really do want to get lost in its stores. By tripling the size of their stores, they're able to double or even triple the amount of time customers spend going through the racks, according to focus groups conducted by the company. Presumably the extra time spent in the stores will translate into higher sales.

Ultimately the retailer wants clothing to fall from nearly three quarters of what its customers buy to just over half, while home goods rises to 22% from 17% of its penetration. Additionally, it generally wants there to be more of everything in its stores. Instead of just selling accessories and beauty supplies (currently of its sales), it wants Anthropolgie to also be a destination for intimates, shoes, handbags, and bridal, all of which would end up accounting for a quarter of sales by 2020.

Whether it works remains to be seen. Other retailers are reducing their footprint in response to declining foot traffic and customer preferences indicating what they really desire is a more intimate setting.

The industry watchers at ShopperTrak recorded a near-15% decline in mall traffic in November and December last year (their busiest months) compared to the same period the year before. Compared to three years ago, the dropoff is even more staggering at almost 50%. 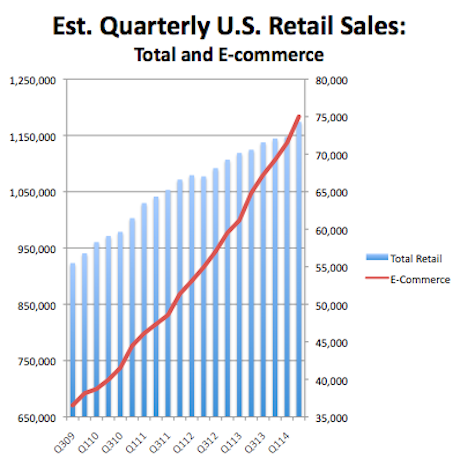 The U.S. Census Bureau says second quarter e-commerce retail sales surged 15.7% from the year ago period and now accounts for more than 6% of all retail sales, or $75 billion on a seasonally adjusted basis. Admittedly that's still a small overall percentage, but it suggests that the best days of online shopping are still in front of it.

According to comScore, 198 million consumers bought something online in the first three months of 2014, or more than three quarters of the population of the U.S.

Even Urban's own results bear this out. In an investor presentation discussing the previous holiday season, the retailer acknowledged that its direct-to-consumer sales grew almost eight times faster than comp sales at its retail stores while shoppers using mobile devices grew 77% for the period.

While consumers may love clothes shopping, with everyone's busy lives do they really have time to spend three hours just hanging out in an Anthropologie store? Urban might be right that they spend about an hour or so in its stores now, but going big doesn't ensure they'll spend more.

According to the Lifestyle Monitor survey from the apparel trade group Cotton, consumers shop twice per month for clothes in stores, and only once per month online, but they spend 105 minutes doing so online compared to 99 minutes in-store.

So I'm not convinced that what works for Ikea can work for Urban Outfitters. There is a certain sense to having a large showroom when you're selling big, bulky furniture as it now wants to do, but that big box feel may ruin the intimacy it's customers feel.

Rich Duprey has no position in any stocks mentioned. Follow him on Facebook where he covers all the most important developments in retail and consumer brand name goods.  The Motley Fool recommends Urban Outfitters. We Fools may not all hold the same opinions, but we all believe that considering a diverse range of insights makes us better investors. The Motley Fool has a disclosure policy.

Why Chewy Was a Dog of a Stock on Wednesday