The old adage states that "nothing goes up forever," but the craft beer industry would prefer to have you think otherwise.

Since the late 1970s, microbreweries have been popping up like weeds across the country, with some eventually blooming into national brewers. In fact, the number of breweries in the U.S. has exploded from just 89 in the late 1970s to 2,538 as of 2013, according to the Brewers Association. At the current double-digit growth rate, we may have more than 6,500 breweries in this country by 2025.

With this rapid rise in craft beer interest, it has to be asked whether this growth is sustainable, or if we're entering a "craft beer bubble."

Admittedly, I'm a big fan of craft beer -- you know, the type of connoisseur that drinks his beer out of the proper glassware and takes notes while trying to decipher the type of hops used or the various flavor notes on my palate. But, I also don't work in the beer industry, so my knowledge of its inner workings are limited to what I can read in an annual report or a conference call. In order to get a true feel for the threats facing the craft beer industry, I turned to RateBeer founder and CEO Joseph Tucker to provide his insight into the matter. 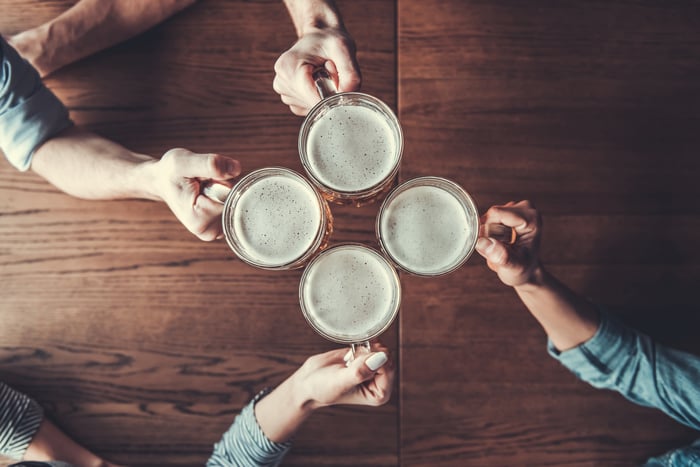 Craft beer's three biggest threats
Tucker's website allows users to rate tens of thousands of beers based on a number of criteria such as aroma, taste, and appearance to help weed out hidden gem brewers, while also proving to be an excellent breeding ground for the exchange of beer industry knowledge. In other words, he was the perfect person to pose the following question:

"What are the three biggest challenges currently facing the craft beer industry?"

Here's what Tucker had to say:

No. 1: Getting swallowed by "Big Beer"

I don't think Big Beer "figuring it out" with either strategic acquisitions or emulating craft brands will be a significant factor in cooling down the still exploding craft sector. While brands like Blue Moon and Shock Top have enjoyed success, Big Beer continues to be hit where it hurts -- their flagships.

We're already seeing greater advantages for the craft sector at the distribution, retail, policy, and lending levels -- and now tougher than ever for Big Beer to push the genie back into the bottle. Craft is here for the long term. It's simply much easier to be in the beer business today than it was 10 years ago.

Tucker hits a on a key point here with the threat that bigger breweries bring to the craft scene: their deeper pockets. Anheuser-Busch InBev (NYSE:BUD), for example, purchased Goose Island in 2011 and Blue Point Brewing earlier this year in order to capitalize on the rapidly growing craft beer movement.

However, deeper pockets won't necessarily mean more market share for larger brewers, even if their money could be used to quickly ramp up distribution that these acquired craft brewers had previously lacked. Beer drinkers have increasingly shown that they're willing to pay a premium price for quality beer. Simply put, if big breweries focus too much of their attention on acquiring or developing craft beer brands, they could risk alienating their core, high-margin products, which would be bad news for these companies over the long run.

No. 2: Becoming watered down by naive new brewers

[The] ease of getting into the craft beer business is its greatest weakness.

The last hit to the market, taken in the late 1990s and lasting until 2005, was mainly due to an over exuberance by newcomers who saw opportunities in what was then called "microbrewing," but didn't have the market knowledge to produce lasting success. Too many got into the business focusing on how to make money instead of on how to make a great product. It was small beer's success that attracted those who hurt the entire market.

The consumers couldn't count on a better product and many of those coming in found a crowded market with increased pressure from Big Beer. Many of the bandwagon microbrewers, who were downloading recipes off the Internet, went out of business and eventually banks became more wary of lending to small brewers, policy liberalization died, consumers drifted and eventually the tide turned.

We're unfortunately seeing a similar environment now, where many new naive brewers are entering the market not understanding some of the bigger basics -- product differentiation, distribution, quality control, location. And more similarly to the late 1990s, I've heard just as many newcomers talk about passé ideas such as market share and flagships with little inkling about the details of popular styles that today's more beer savvy consumers demand -- you can't have the business right and the product wrong. We're already seeing some increased churn where the overall number of brewers is still rising rapidly but the rate of closures has also increased somewhat. Increased natural churn will be the new normal for a while.

Tucker's point hits on the main lure of craft beer: the intrigue of its exclusivity. It's exciting to be able to taste something that few people have tried, or that can't be had in every grocery store. It's also a thrill to examine the nuances in taste, appearance and aroma, for instance, from what's becoming a large number of breweries.

But the problem becomes this: At what point is the industry so watered down with unqualified brewers that it begins to detract from the intrigue of craft brewing?

Between 2006 and 2012, the amount of craft beer produced soared 71% to 13 million barrels as craft beer market share by dollar volume increased to 10.2% of the domestic beer market. However, as Tucker alluded to in his answer, more than 300 breweries closed their doors between 1996 and 2000 because of a mixture of undercapitalization and owners chasing returns in an industry they didn't quite understand. Based on craft beers' current growth projections, this shakeout could be on the precipice of repeating itself once again.

Additionally, the bigger craft brewers are becoming much stronger regional and national brewers, and some small brewers have complained that many of the unfair business practices associated with Big Beer are now being taken up by craft brewers filling their shoes. Sam Calagione, the owner of Dogfish Head, sees a "bloodbath" up ahead. A few successful craft brewers are out there aggressively taking tap handles, lobbying for newcomer-hostile policy, and abandoning the "coopetition" and "us Davids against them Goliaths" ethos that helped build the craft sector. It's craft beer eating its own young.

Lastly, Tucker makes the interesting point that it's possible for craft breweries to stop having that small-town feel and become too large for their own good -- essentially becoming Big Beer themselves. From a profitability standpoint, that may not be a bad thing, but it could alienate what had been a core customer as well as hurt the momentum of the craft beer movement.

Perhaps the two companies that have to balance the struggle of sticking to their roots while also pushing the envelope across the U.S. are Boston Beer (NYSE:SAM), the maker of Samuel Adams, and Craft Brew Alliance (NASDAQ:BREW), the parent company of several craft brands, including Widmer Brothers, Redhook, and Kona.

Boston Beer has done an exceptional job of counteracting the loss of its small feel by having founder Jim Koch personally appearing in many of Sam Adams' commercials. Portraying a down-to-earth CEO making beer for those who want something more than what Big Beer is offering, Sam Adams and Boston Beer continue to find the mark year after year.

For Craft Brew Alliance, it's becoming increasingly tough to stick to its roots. Despite being self-labeled as an independent craft beer producer, Craft Brew Alliance's major shareholder, owning nearly one-third of its outstanding shares, is none other than Anheuser-Busch InBev. In other words, the bigger Craft Brew Alliance becomes, the more difficult it could be to retain its craft feel.

The sun is shining on craft beer
Obviously, craft beer is poised to face some challenges in the coming years if its current growth trajectory remains unchanged. But, in the words of Tucker, "The genie is out of the bottle. Consumers know good products. Governments know craft is better for employment and revenue. And the playing field is no longer hopelessly controlled by established multinational corporations. Good beer will prevail."

For the craft beer connoisseurs among you, as well as investors, this would be a welcome and bubbly forecast indeed.