When McDonald's (NYSE:MCD) reached out recently to request consumers ask anything about its food, many of the questions it received were unsurprisingly blunt and laced with skepticism.

One father asked, "Does McDonald's even serve real food?" Another man wondered, "What part of the chicken is the chicken nugget?" Another prodded, "That pink slime ... what's up with that?" while several asked "What's really in your beef?"

It's no mystery that food quality isn't exactly of the fine-dining variety at McDonalds. But given McDonald's low prices and status as a quick-service restaurant concept, it's safe to say most consumers don't expect it to be. In response to those questions, though, McDonald's yesterday took to YouTube with the first in a series of videos to set straight some common misconceptions surrounding its food quality.

This one tackles exactly how McDonald's burger patties are made:

The video seems almost too perfect. More than anything, it feels like a short McDonald's infomercial. But I can't be the only one surprised by the relative simplicity and quality of those patties. In any case, the premise stands that McDonald's all-beef burgers are just that: no preservatives, fillers, pink slime, or eyeballs. Just high-quality beef with a touch of salt and pepper added when the patties are cooked.

McDonald's didn't stop there. In other videos it tackled the nuances of the fast-food giant's flash-freezing process (which locks in texture and flavor), as well as why its burgers are so cheap (think massive purchasing power). If the spokesman's comments in the video are any indication, it also looks like McDonald's has more of these food quality ads in the pipeline.

The (steaks) are high
Without a doubt, McDonald's needs to do something to right its sinking ship. The stock sits just a touch above its 52-week-low for good reason: In the U.S. as of August, McDonald's comparable-store sales had declined in nine of the preceding 10 months. A few weeks ago, the company announced August global comparable-store sales had decreased 3.7%, including a 2.8% plunge in the United States. When fellow Fool Rick Munarriz outlined several underlying causes of the weakness last month, it's no coincidence "quality" stood at the top of that list.

Will the latest McDonald's food quality ads reverse that trend? I doubt it.

For one, consider consumers' initial reactions to the video above. As it stands, the ratings are split almost evenly between those giving it a thumbs up and thumbs down, and the comments section is largely comprised of still-skeptical viewers who absolutely refuse to believe a.) in the authenticity of the video, or b.) that McDonald's burgers don't contain fillers.

To McDonald's credit, it seems to be responding directly through its corporate account to many of those skeptics. But given the millions upon millions of existing opinions already skewed against the chain, changing every mind is a tall order to fill.

Next, consider that a Consumer Reports' taste survey published in July ranked McDonald's far below no fewer than 20 competitors in the burger space on taste: 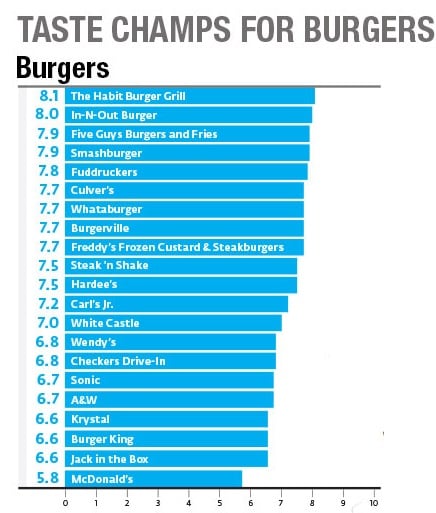 What's more, those consumers told Consumer Reports "that quality of the food has become more important in their dining decisions, and convenience of location is less so" than in its previous 2011 report. The latter, of course, seems a direct shot at McDonald's and its more than 14,000 domestic locations, which makes it by far the largest burger chain in America.

But we also can't rule out the possibility that consumers' low ratings of McDonald's stem at least in part from their misconceptions surrounding its food quality. Various studies have shown, for example, that taste is much more than just what touches our tongues, but rather influenced by a combination of shape, smell, color, and even the weight of the packaging and the environment in which it is eaten. It seems only reasonable, then, that entrenched consumer perception could be negatively influencing the McDonald's brand, regardless of whether its food is actually of good quality. If that turns out to be the case, perhaps the Golden Arches' food quality ads could prove at least a good first step in the right direction.

In the end, however, one thing seems clear: McDonald's has its work cut out for it in convincing consumers that its fast food is worth their dining dollars.