Please ensure Javascript is enabled for purposes of website accessibility
Log In Help Join The Motley Fool
Free Article Join Over 1 Million Premium Members And Get More In-Depth Stock Guidance and Research
By Jed Kolko - Oct 20, 2014 at 9:06AM

Asking prices rose 7.3% year over year for condos versus 6.0% for single-family homes. Condo prices are up more than 15% in Miami, Denver, and West Palm Beach.

The Trulia Price Monitor and the Trulia Rent Monitor are the earliest leading indicators of housing price and rent trends nationally and locally. They adjust for the changing mix of listed homes and show what's really happening to asking prices and rents. Asking prices lead sales prices by approximately two or more months. As a result, the Monitors reveal trends before other price indexes do. With that, here's the scoop on where prices and rents are headed.

The South leads in price gains
Five of the 10 U.S. metros with the largest year-over-year price increases were in the South, including Miami, Palm Bay-Melbourne-Titusville, West Palm Beach, Birmingham, and Atlanta. 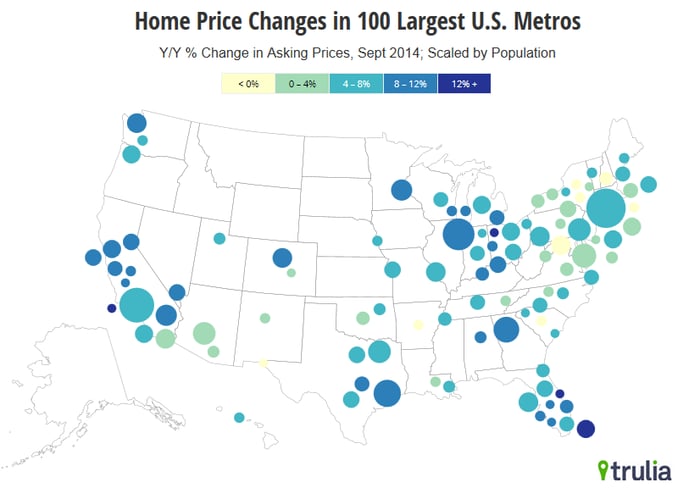 The next Trulia Price Monitor and Trulia Rent Monitor will be released on Thursday, November 6.

This article originally appeared on Trulia.com.