In the first six months of this year RootMetrics awarded Verizon Communications' (NYSE:VZ) wireless division with the highest overall network rating among all U.S. wireless carriers. The company beat AT&T (NYSE:T), T-Mobile and Sprint in reliability, speed, data performance, and call performance. It was the second time in a row the company earned the top spot, and speaks to the company's strong position against its competition. 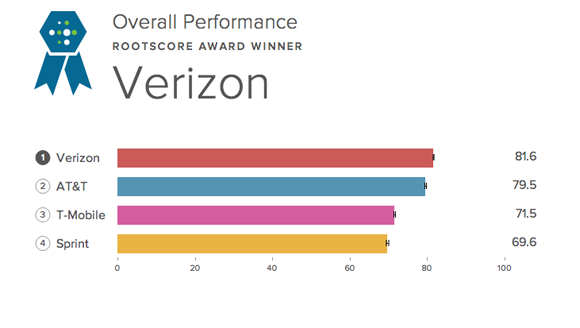 But how exactly does being the nation's best wireless provider benefit Verizon's business? To answer that, we need to look at a few core metrics of the company's business: churn rate, average revenue per account (ARPA), and cash flow.

The underlying benefits of a strong network
First, it's important to remember that Verizon Wireless makes up 70% of the company's overall revenue. So having the best wireless network has serious implications for the company's business.

Last year, Verizon's churn rate -- the rate at which customers left the company for another carrier -- was just 0.91%. For comparison's sake, AT&T's was 1.08% over the same period. In the third quarter of this year Verizon's postpaid churn rate inched a bit higher to 1.00%, but it's still a respectable number.

While churn rate isn't exclusively tied to how satisfied customers are with a network (contract penalties, special family plans, and other factors can keep customers from leaving), it definitely helps.

Morningstar analyst Michael Hodel said in a recent research note that, "We believe Verizon Wireless' continued strong customer loyalty indicates that a large percentage of customers choose the firm for attributes it controls directly, including its network reputation."

So that's great news for Verizon. A strong network reputation leads to customers choosing the network, and ultimately (at least in part) staying with the network.

While low churn rates are great, at the end of the day investors need this to translate into more revenue for the company. So let's take a look at Verizon's average revenue per user (ARPU) each quarter for the past year compared to the competition:

For that we can look to the company's average revenue per account (ARPA), which is the preferred metric for how Verizon reports its revenue per users and is a better way to account for the multiple devices sharing one account. In Q3 2014, Verizon's ARPA increased 3.5% year-over-year because of increased "monetization of higher usage accounts." 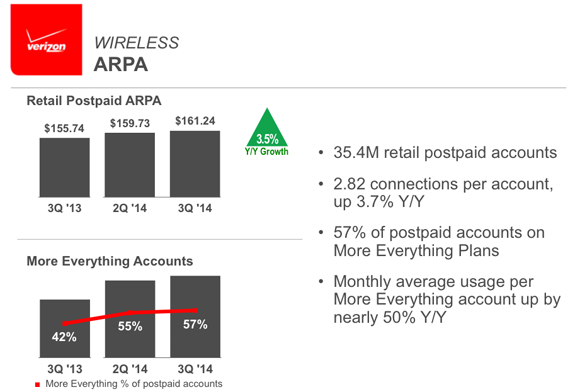 Verizon was able to get more revenue per account because more of its customers are on its high-usage More Everything data plans. In fact, average usage for each More Everything plan is up about 50% year-over-year.

The more data customers use, the more likely they are to sign up for plans with higher data allotments -- which cost more money and drive up ARPA and ARPU. On the Q3 earnings call, Verizon CFO Fran Shammo said,

"Growth in ARPA is a function of device adoption, account growth, and increased usage. The continued rapid pace of 4G device adoption is improving the quality of our customer accounts."

But to get users to sign up for higher usage (and more expensive) plans, Verizon needs a strong network. Which brings us right back to why it's so important that Verizon holds the best overall network performance title. The stronger the network, the more customers stick around, and the more they use their smart devices, which in turn equals more ARPA for Verizon.

Eventually the increased average revenue per account helps builds Verizon's cash flow. Take a look at how it's grown in 2014: 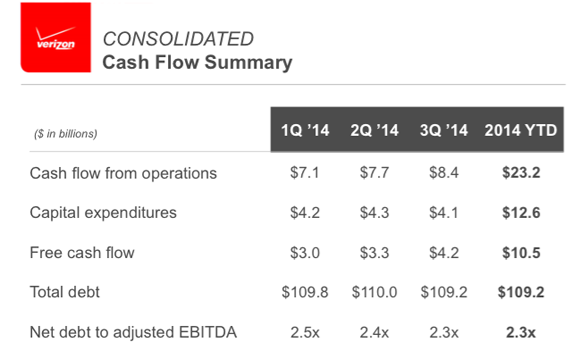 Year-to-date Verizon has a cash flow from operations of more than $23 billion and free cash flow of $10.5 billion. Hodel noted that both AT&T and Verizon enjoy cash flows that continually boost their networks. "These firms both generate fantastic cash flow while simultaneously investing heavily in marketing, network improvements, and wireless spectrum that other rivals can't match," he said in an investor note.

Foolish thoughts
So that was a bit of a long answer as to why Verizon's best-performing network actually benefits the company. Through its No.1 network, Verizon keeps churn rates low and increases how much revenue it earns from high usage accounts, and those in turn build its free cash flow.

The benefit of having more cash on hand is that Verizon can continually reinvest in its network to stay ahead of the competition. But as RootMetrics noted, "the separation between Verizon and second-place finisher AT&T was small." So while Verizon's clearly benefited from its dominant network, there's no time to celebrate as AT&T inches closer to the top spot.