According to Akamai Technologies' (NASDAQ:AKAM) most recent "State of the Internet" report, all 50 U.S. states saw a better than 10% year-over-year increase in connection speeds. Delaware saw the biggest boost, with a 50% average jump, while North Carolina's 16% improvement ranked worst. 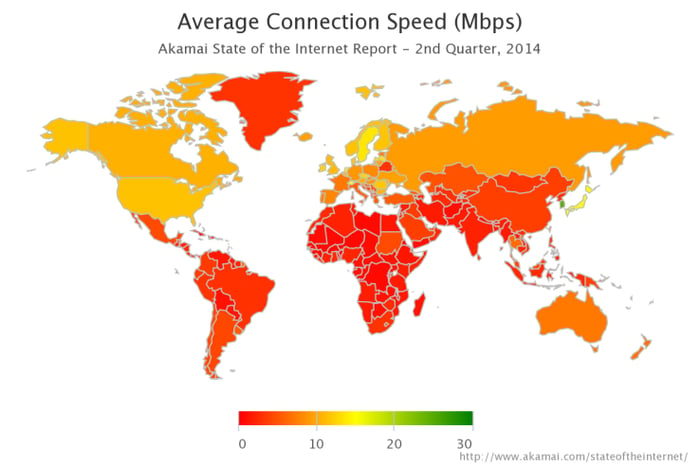 A look at Internet connectivity around the globe. Source: Akamai Technologies via TechCrunch.

Worldwide, average connection speeds rose above 4 megabits per second for the first time. In the U.S., connectivity above 10 MBPS has become increasingly common. Peak speeds top 50 MBPS on average in the 10 states with the fastest connections.

As a species, we're hungry for speedier, more reliable Internet access. Google Fiber is starting to fill that need here in the U.S., though signs point to a more accelerated rollout in the years ahead.

How shaming is making us better
Few cities actually have the service, of course. Kansas City and Provo, Utah, are among the lucky few. Austin, Texas, will get a greater share soon enough while Atlanta, Portland, Ore., Raleigh-Durham, and a handful of others eagerly await word. All told, Google has singled out seven cities as potential fiber sites.

In a way, it's public shaming without the finger-pointing. The very act of introducing gigabit fiber to communities has threatened incumbent telecoms because of the technology's game-changing potential. (Bloomberg cites FCC data that says Google Fiber is 47 times faster the average subscribed broadband speed of 21.2 MBPS.)

Verizon (NYSE:VZ) recently responded to the threat with a bit of clever positioning. In August, the carrier announced new "symmetric" service in areas where it offer FiOS fiber optic connectivity. This isn't anything new, of course, since all fiber connections are symmetric, offering as much bandwidth of uploading data as downloading it. So why do it? To differentiate from asymmetric cable while defending against a potential Google Fiber incursion.

Waiting for wires while getting a better wireless experience
Neither FiOS  nor Google Fiber is available in suburban Denver, where I live and work. I'm nevertheless benefiting from the search king's Internet largesse via the local Starbucks, where I sometimes write.

No longer powered by AT&T, the new "Google Starbucks" connection comes in fast and without strings. The portable WiFi box I had been using while out and about tends to remain tucked away in my backpack during my weekly writing visits to the cafe. 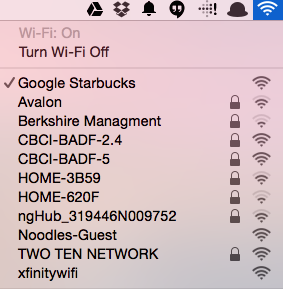 Connecting to "Google Starbucks" for a bit of off-site writing.

Ultimately, Google aims to put WiFi in all 7,000-plus U.S. Starbucks locations by the first half of 2016. That could have a huge impact. FierceWireless Tech has a report from SpeedSpot that says users at Google-powered cafes are experiencing as much as an 18 times increase in download speeds over what AT&T had supplied previously. It's a neat stopgap for users in need some of something more durable.

A crowded cloud creates a need for faster networks
What's driving the need to upgrade? Changing habits. The Internet isn't the purely download-driven medium it used to be.

Not that long ago, if you were on the Internet, you mostly used it for updating software, watching YouTube videos, or streaming Netflix movies. We were consumers of "downstream" traffic more than anything else, so carriers didn't worry about supplying a fast pipe for uploading data to servers or corporate networks.

Those days are fading fast. According to Forbes, roughly 75% of us now use a cloud computing platform. A separate survey found that 86% of companies use at least one cloud service, while most use four, CloudTech reports. Consumers are becoming creators -- and chewing more bandwidth in the process.

In that world, slow, asynchronous cable Internet is an economic bottleneck that has to be removed. Google is working on it -- and that's bad news for every carrier standing in the way.