Walmart (NYSE:WMT) has seen better days, no doubt about it. After posting an anemic year-over-year revenue increase of 1.6% on its last annual report, the company has continued to struggle to turn around its fortunes. Overall the company is facing a host of external issues including a squeezed target customer and online competition, and execution concerns including shelf stockouts and staffing levels.

However, it wasn't always like this. Founder Sam Walton opened the first Walmart store in 1962, and through logistical and distribution chain excellence the company was able to lower costs. In turn, it passed those lowered costs on to the customer. The company quickly became the leading retailer in the United States.

Early on, Mr. Walton passed his shares of the company on to his heirs and, even now, they own more than 50% of the company and have two seats on the board of directors. And for investors, that's a risk to Walmart as an investment: Simply put, Walmart appears to be more concerned with its shareholders (read: the Walton family) than growing the brand and the company.

Managing not to lose instead of managing to win

Walmart appears to be stuck in the mind-set that the days of growth and increased market share are behind it and instead are plowing money into buying back stock. Recently the company authorized an additional $15 billion to buy back stock to replenish its $15 billion authorization that was mostly spent over the previous two years. Last year the company posted operating income of nearly $23 billion and spent more than half on dividends and share buybacks. The chart below will give you context:

Are all shareholders the beneficiary in the short term, sure, but on a long-term basis investors want to see a company grow both market share and net income; that's something Walmart has struggled with in the last couple of years.

Here's why it matters
While dividends and share buybacks are good for investors, long-term holders and perspective investors want to see a growing business. And while many focus on earnings per share to measure if a business is growing, it is also important to remember to look at pure net income. You want to see a company growing net income as well and not depending totally on shrinking share counts to grow earnings per share. And over the last three years plus, Walmart hasn't done that. 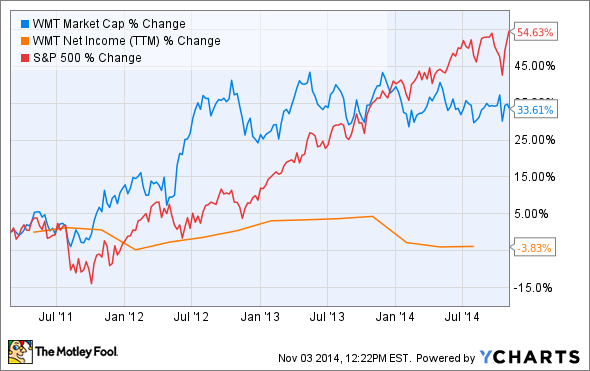 So while Walmart increased its market capitalization 34%, the greater S&P 500 increased at a 55% clip. The issue appears to be sluggish net income growth. The trailing 12-month net income figure never increased more than 5% and is now down nearly 4%. Over the long run investors need that figure to grow and will become less enamored with share buybacks and dividend hikes if the business isn't executing well.

And why is the Walton family a risk here?
On many issues Walmart has acted too cautious. It is almost as if the company is more concerned with wealth preservation instead of growth. A key example of how they missed the boat was the huge opportunity they missed with online shopping. Matter of fact, Amazon.com famously poached Walmart online executives as they fled from a company that misunderstood this opportunity.

Even now the company finds itself perpetually understaffed with many employees complaining of working conditions and poor morale. This is simply not a plan for growth; it's a plan for long-term irrelevance. And with more than 50% shares owned by the family and two board positions, there's really nothing shareholders or activist investors can do to change the company. In the end, the company appears to comport itself as a wealth-preservation investment for its heirs rather than the hungry retailer Sam Walton founded ... and that's a risk to all shareholders, including the Walton family.