What makes a high-yield business development company able to deliver such oversized rewards?

To answer this question, I think you have to understand what makes any investment outperform. And to answer that question broadly, the answer seems to be valuation. Finance 101 dictates that the less you pay for a future stream of cash flow, the greater your return should be.

More specifically, the lower the price you pay for earnings before interest, taxes, depreciation, and amortization, or EBITDA, the higher your returns should be. In fact, studies confirm that the cheapest stocks by EBITDA have historically rewarded investors with the biggest returns.

How does this apply to private markets?
Business development companies don't buy publicly traded companies. They invest primarily in the debt and equity of private companies. So what's the connection to BDCs?

So, to round it out, the way to outperform is to go smaller.

This is a chart from Flag Capital showing the pricing discrepancies between small and large private companies. You should notice a trend: the bigger the private company, the bigger the EV/EBITDA multiple you pay to buy it. Although the valuation obviously varies by industry, the general rule holds true that smaller companies beget smaller valuations, and vice versa.

The difference is not trivial. The largest companies are more than 50% more expensive than the smallest.

Astute readers should come to a few quick conclusions:

Who's who in the lower middle market
The smallest of private companies are considered to be the "lower middle market." Definitions vary, but I like Main Street Capital's (NYSE:MAIN) definition of companies that generate $3 million-$20 million in annual EBITDA. According to the Small Business Administration, about 175,000 domestic companies fit that definition.

Triangle Capital (NYSE: TCAP) defines lower middle market as companies with annual revenue of $20 million-$250 million, of which 65,000 fit that definition. Either way, it's a big market of really small companies relative to public companies.

In typical fashion, Main Street, Triangle, and Fidus all maximize the use of cheap leverage from the SBA. 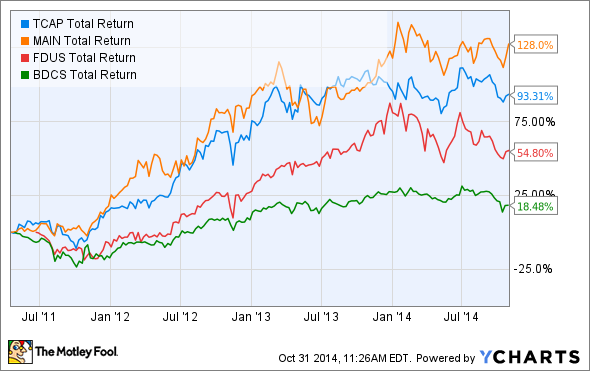 If you look at their histories, you'll see that these three BDCs have been top performers. Main Street and Triangle Capital lead the pack of all BDCs, while Fidus ranks among the best externally managed companies. Main Street and Triangle Capital obviously have the advantage of lower operating costs, something Fidus doesn't have given its external management arrangement.

To round it all out, if you want to find top-performing BDCs, I'd suggest looking to the lower middle market. Lower middle-market BDCs invest in the cheapest of private equity companies, generating fatter spreads on debt and higher earnings returns on equity. All else being equal, that gives them an edge over your average BDC.

Those BDCs that compound the advantage with low-cost operating models -- such as Main Street and Triangle Capital -- only extend their advantage over their peers. Call it a win-win that has resulted in very clear outperformance over time.