When it comes to legendary investors Warren Buffett pretty much sits at the head of the table. Warren Buffett's investing strategy took roughly $10,000 in savings and turned it into more than $70 billion over the course of six decades, leading investors to follow every word the Oracle of Omaha might have to say these days. Not only that, but many investors also willingly follow Buffett and his conglomerate Berkshire Hathaway (NYSE:BRK.A) (NYSE:BRK.B) headfirst into a number of investments.

Buffett's success stems from his view that he's buying into well-managed businesses, not stocks, over the long-term. He takes the simplistic approach that removes variables like market timing and emotions from the equation and instead looks for businesses that can essentially run themselves in any economic environment. Furthermore, he tends to meander toward businesses which are well-liked, healthfully profitable, easy to understand, and which pay a dividend. 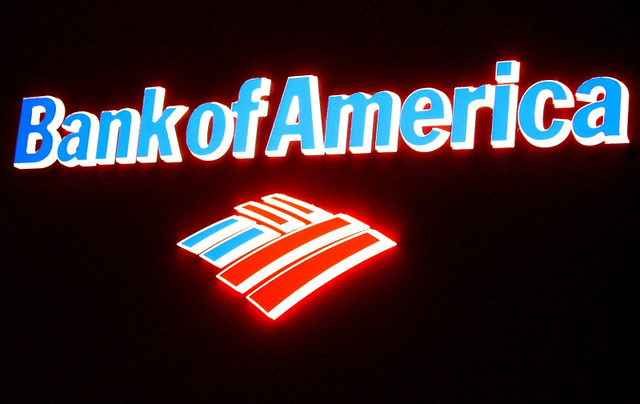 Warren Buffett's interest in B of A
As a quick refresher, in 2011 Warren Buffett and Berkshire Hathaway made a $5.25 billion investment in Bank of America's preferred stock which pays a 6% annual dividend, and has an option to purchase up to 700 million shares of Bank of America stock for $7.14 per share. This option that doesn't expire until the year 2021.

Some viewed the move by Warren Buffett as that of a savior, giving Bank of America a lifeline of cash during a time when legal actions and still weak financial conditions were resulting in hefty cash outflows from a number of the nation's biggest banks. Others, like my Foolish colleague Patrick Morris, have opined that Buffett's intent was merely investment focused, and that Bank of America was never at any time in financial straits. Either way, Bank of America certainly steps outside the boundaries of a typical Buffett investment in a number of aspects.

Not your typical Buffett investment
For starters, Bank of America is among the least liked companies in America. This isn't to say banks or insurers are typically well liked in the first place, but in the grand scheme of things Bank of America is arguably the most hated bank.

The reasoning behind consumers' dislike of Bank of America springs from the numerous lawsuits brought against the company for its mortgage and loan practices prior to and during the Great Recession. The fines and lawsuits Bank of America continues to pay and face casts light on the poor decision-making it made during in latter part of the last decade. According to The Huffington Post, of the $128 billion in bank settlements since 2009, Bank of America has accounts for $61.2 billion of that total. In context, JPMorgan Chase (NYSE:JPM) is a distant second at $31.5 billion.

Bank of America also hasn't helped its cause by attempting to extract additional high-margin fees from consumers. In Sept. 2011 Bank of America announced its intent to charge its customer a $5 monthly fee to use their debit card. Whether it was used once or 50 times, and regardless of whether users chose "credit" as opposed to "debit," they would face the fee. Ultimately, Bank of America and other banks which had considered following suit backed down just weeks later after huge public backlash against the idea.

Generally speaking Buffett tends to avoid hated companies because they have to spend more on advertising in order to boost business. In this case, though, Bank of America is one of the nation's largest financial institutions, and is therefore something close to a basic-needs service provider. Although consumers could live without a bank, most people need banking services in order to get cash, obtain credit, or apply for personal loans or a mortgage.

Where's the beef?
Buffett also loves a good dividend, and that's something Bank of America really doesn't offer. As part of its deal with the Federal Reserve Bank of America's dividend was slashed to just $0.01 per quarter for what wound up being more than five years. Even with a boosted payout Bank of America's yield is still just a hair over 1%.

Buffett, however, also found a way around Bank of America's insufficient dividend by tapping B of A's preferred shares. Preferred shares get priority over common stock, and in this instance they also come with a handsome 6% annual yield. Riding these shares with this yield could double Buffett's $5 billion, even without share price accumulation, in approximately 12 years!

A derivative disaster?
Lastly, Warren Buffett's investing strategy targets easy to understand businesses. Wells Fargo (NYSE:WFC), one of the largest Buffett investments, might be a mammoth money center bank, but it relies on traditional savings and loans to drive its growth. Wells Fargo wasn't tempted by derivative investments and hedges which nearly toppled the U.S. financial markets during the Great Recession.

Bank of America, on the other hand, currently has exposure to $54 trillion in derivative investments according to Zero Hedge as of September. This certainly adds a bit of risk to the table that Buffett typically wouldn't take on, and makes it tougher to fully understand how B of A makes its money.

Does Bank of America fit Warren Buffett's investing strategy?
As you're probably now well aware, Bank of America isn't your typical Buffett investment. But, can it survive in the Oracle of Omaha's portfolio over the long term?

I suspect the answer to that question is yes, thanks to Buffett's advantageous yield in B of A's preferred shares, as well as the suspicion that the majority of the banks' legal fees are now in the rear-view mirror.

Other figures are also showing significant improvement. The net charge-off ratio in the third-quarter was 0.46%, its lowest level in a decade, while its net interest yield improved seven basis points from the sequential second quarter. In short, it's no Wells Fargo, but the underlying meat and potatoes of the banking business continue to show slow but steady improvements.

Buffett certainly isn't expecting Bank of America to grow like a technology stock, but reasonable appreciation from one of the nation's largest financial institutions isn't out of the question. I wouldn't look for Buffett to add to his position anytime soon, but I also don't expect the Oracle of Omaha to sell his stake either considering B of A's proximity to the end of its legal woes.