If you're looking for wealth-building investment ideas, its hard to go wrong with dividend growth stocks. The trick is to find companies with a solid track record of creating shareholder value through dividends and share buybacks. Below, Motley Fool contributing analysts explain why VF Corp (NYSE:VFC), PepsiCo (NASDAQ:PEP), Starbucks (NASDAQ:SBUX), IBM (NYSE:IBM), and Las Vegas Sands (NYSE:LVS) are five of the top dividend stocks to buy this month.

Jason Hall: Even if VF Corp doesn't ring a bell, you're definitely familiar with this 115 year old clothing maker's brands. There's a good chance you have something made by, Lee, Wrangler, The North Face, 7 for All Mankind, Timberland, or one of the company's dozen other labels, hanging in your closet.

The stock isn't particularly cheap, and its 1.8% dividend yield isn't likely to turn up on many dividend stock screeners. However, there are very few companies that combine this company's prospects to grow both the business -- and the dividend -- in coming years. Over the past five years, VF has grown sales by 8% annually,(1) and earnings per share almost 13% (2) -- a rate management expects to maintain for at least the next five years. The biggest source of that growth will be in direct to consumer sales, via company-owned retail stores and e-commerce, both of which drive higher margins than sales to the company's retail and wholesale partners.

Management just approved a 22% dividend increase (3) -- the second year in a row with a 20%-plus bump -- and the 41st year in a row the dividend has gone up. (4) The yield may be small today, but very few companies have the track record of consistent dividend and share price growth that VF Corp has delivered. The best part? The growth isn't even close to being over.

Tamara Walsh: PepsiCo is a dividend aristocrat, which means it has continuously increased its dividend payout every year for the past 25 years. The soda and snack giant has been rewarding income investors since 1952 and has raised its dividend payout for the past 42 consecutive years. The company's latest dividend boost was to the tune of 15% to $2.62 annually, up from its prior payout of $2.27 per share. This is equal parts rewarding for shareholders and sustainable for Pepsi because it increased the company's payout ratio to 53%.

When researching dividend stocks the payout ratio is important because it tells us how much of the company's net income is being given back to shareholders. For example, at 53% of Pepsi's net income, management still has ample cash left over to reinvest in growing the business.

Pepsi is also creating shareholder value through share repurchases. In fact, the company plans to buy back $5 billion worth of its shares this year. That is in addition to the $6 billion, which Pepsi has already returned to shareholders so far this year in the form of dividends and share repurchases.

Moreover, Pepsi should have no problem continuing to grow its dividend for many years to come thanks to its strong portfolio of brands (22 brands in its snack portfolio, for example, each generate annual sales north of $1 billion). Together, these things make PepsiCo one of the top dividend stocks to own this month.

Joe Tenebruso: One of my favorite dividend stocks is Starbucks. That's because the coffee titan – and its shareholders – have so many ways to win. Starbucks' global expansion strategy is about to kick into high-gear, with the company recently acquiring full ownership of its operations in Japan -- Starbucks' second largest market -- which management expects will allow the company to increase the pace of its store count expansion in the region. Management also recently announced plans to accelerate growth in China, a potentially massive market that continues to exceed Starbuck's sales projections.

In addition, Starbucks is taking share in grocery aisles, with this segment's fourth-quarter revenue jumping 12% year over year to nearly $400 million, and operating profit surging an even more impressive 34% to $172 million. Starbucks' packaged goods business is a valuable complement to its coffeehouses, and further cements Starbucks' brand in the minds of consumers when it comes to premium coffee and an increasing selection of food products.

Helping to fuel this growth is the innovative culture founder and CEO Howard Schultz has ingrained in Starbucks. Whether it's developing a highly regarded mobile payments system or launching a new delivery service, the company is constantly moving forward. In turn, this allows Starbucks to continue to dominate its core business while at the same time entering and disrupting new markets, thereby displaying the best qualities of both a Rule Maker and Rule Breaker.

All told, I expect Starbucks' operational success to continue to generate solid increases in revenue and earnings, as well as rising dividend payments to its shareholders.

Andres Cardenal: Las Vegas Sands is going through a challenging period. Gaming revenues in Macau are under pressure due to a combination of factors: China authorities are restricting credit and visas for VIP gamblers to fight corruption, political protests in Hong Kong are hurting Chinese tourism in general, and economic growth in the country has decelerated over the last few quarters.

On the other hand, these factors are transitory by nature. On a long-term time frame, Las Vegas Sands is still the market leader in Macau, an extraordinarily promising market with huge potential for growth as the main gambling destination for the rising Chinese middle class in the decades ahead.

Gambling is an enormously profitable business producing tons of cash flows for Las Vegas Sands. Even during a difficult period, the company generated more than $2.8 billion in free cash flows during the first 3 quarters of 2014. This means Las Vegas Sands has more than enough financial resources to continue raising dividends over the coming years.

Price and dividends are moving in opposite directions lately, Las Vegas Sands stock has fallen by nearly 23% year-to-date, while the company has recently announced a big dividend increase of 30% in combination with a new share buyback program for $2 billion. This brings the dividend yield to a big 4.3% on a forward looking basis, quite an attractive return coming from a solid growth business.

Anders Bylund: There's a lot of green to be found inside Big Blue. In fact, IBM shares haven't looked this attractive to long-term investors in the last twenty years.

Let's be clear: IBM shares are trading at mouth-watering prices because the business is under pressure. CEO Ginni Rometty is reshaping her company in a radical way, peeling off low-margin hardware operations in favor of a fresh software-and-services focus. The long-term vision is a leaner, meaner IBM where each dollar of revenue makes a bigger impact on the bottom line. Along the way, investors are panicking over lower sales volumes and the occasional hiccup. That's what happened in October.

Soft September sales led to disappointing revenue and earnings for the entire quarter. Share prices plunged 11% in three days, and haven't recovered in the several weeks since. That sudden drop unlocked a couple of treasures for those who believe that IBM's troubles are temporary: 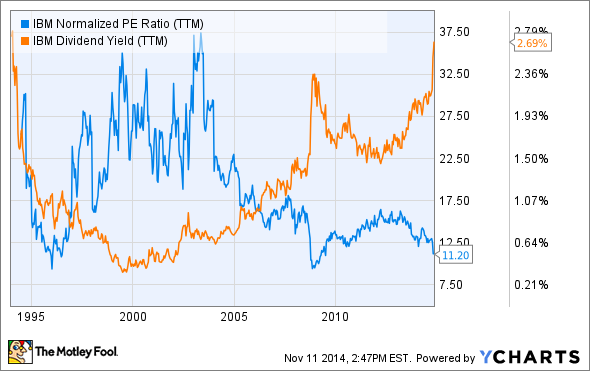 In other words, this knee-jerk market reaction unveiled some of the strongest dividend yields in IBM's history alongside a bargain-basement valuation. I believe that Rometty's vision will eventually lead to a stronger and more sustainable IBM. If you agree, there may not have been a better time than right now to buy IBM shares in the last two decades -- especially if you're interested in IBM's soaring dividend yield.