This article was originally published on the Motley Fool's website on November 17, 2014 and was updated on March 30, 2016.

There are lots of opportunities out there to make good decisions in the world of investing, and there are just as many "faux-pportunities" out there that are just plain dumb. In the world of energy, one of those really dumb things you can do is to invest simply in what the price of oil -- or any other commodity -- will do in the future. Let's take a deeper look at why investing in oil prices will do nothing but burn through your investment, and why it is still so prevalent among investors.

Invest in oil, don't invest in oil prices
Just about every company that is even remotely involved in the oil space will see its prospects wax and wane with the price of oil; so the idea of investing in oil without taking oil prices into consideration does sound silly. At the same time, though, there's a very large difference between investing in great companies that are in the oil business over the long term, and chasing oil prices for profits. The first strategy will likely lead to successful wealth-building investments, while the latter will leave you pulling your hair out, and likely leave you with less money than what you started out with.

What makes it so difficult to stick to the first strategy is that we are constantly inundated with news about oil prices. Go look at any major media outlet's energy section. I'm guessing that, of the dozen or so articles posted on a daily basis, five to seven of them are about what the price of oil has done on a daily, weekly, or monthly basis. Heck, two numbers that a financial radio/TV/web based show will display, along with the performance of the market, is the price of Brent and West Texas Intermediate crude.

Seeing these prices every day is a constant reminder of what's going on in the oil industry. It can make you very, very tempted to get into the game of speculating on the price of oil, and making "investments" on where that price is headed.

Here's the problem with that style of investing: It's impossible to know what is going to happen to the price of oil. Back in 2008, were you saying to yourself, "There's no way that we are in peak oil, the U.S. is going to almost double its oil production in the next six years, and prices will plummet to less than $40 a barrel?" I'm guessing that the vast majority of you were not. There are way too many "unknown unknowns" -- yes, I'm stealing from Donald Rumsfeld here -- that we have no idea are coming. How can we possibly make an accurate prediction about the price of oil in the future?

The other issue with this investing style is that it can tempt people into ignoring the risks of a company in the good times, and fretting about a great, undervalued company when prices look rough. Just like with the wild swings of the broader market, we are too tempted to assume that what will happen in the future is a continuation of existing trends, and will permanently dictate your investment thesis.

To make matters worse
What makes investing in oil prices even dumber is that the vehicles in which to do it -- oil and gas exchange-traded funds such as United States Oil ETF (NYSEMKT: USO) and iPath S&P GSCI Crude Oil Total Return Index ETN (NYSEMKT: OIL) -- do a very poor job of actually performing like the price of oil. How is that possible?

To start, these funds never actually own the physical commodity. Instead, they only own futures contracts that they need to roll over into new contracts prior to expiration, so that they are not stuck either taking oil they can't sell or selling oil they don't have. This can pose a very unprofitable position when oil prices are falling. Then the ETF is forced to sell its contracts to avoid delivery, and then be stuck with crappy contracts after the price of oil has risen again. 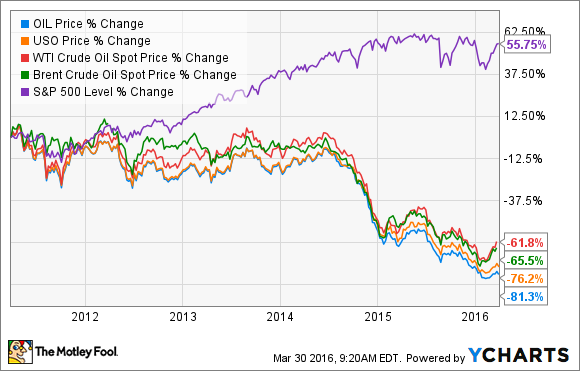 Futures contracts are great for producers looking to lock in some price stability to sell its products, or for major consumers, such as refiners, to do the same. As an investment for individuals like you and me, they don't make a whole lot of sense.

What a Fool believes
Trying to chase profits with the price of oil is one of those things that fools you into thinking you are doing something smart. You'll likely scour news headlines about supply and demand, geopolitics, and a slew of other major factors to come up with a hypothesis about future prices. In reality, though, it's just a dumb idea to even attempt the feat in the first place.

The reality is that you don't need to work that hard to be a successful investor, no matter if it's oil stocks or any other type of investment. Leave all the oil price speculation to the day traders and the people who want to show that they are the smartest ones in the room by making oil price prognostications. You just sit back and enjoy the riches provided to you from investing in great companies over the long term.