The case has been made a number of times times: Apple's (NASDAQ:AAPL) foray into smartphones with larger displays via the iPhone 6 and 6 Plus lineup could attract a large number of Android users. Two months after the launch of Apple's newest iPhones, the argument lives on. A recent survey by UBS Evidence Lab found that a surprisingly high percentage of Samsung smartphone owners planned to buy an iPhone.

Canaccord Genuity analyst Michael Walkley predicted that Samsung, the No. 1 manufacturer of phones based on Google's Android operating system, would be hurt the most by Apple's introduction of iPhones with 4.7-inch and 5.5-inch displays. Shortly after the iPhone 6 launch, Walkley said initial surveys pointed to an abnormally high number of Android smartphone owners buying an iPhone 6 or iPhone 6 Plus.

And the latest bet on a high level of Android switchers comes from UBS analyst Steven Milunovich via AppleInsider. After polling 4,000 respondents in the U.S., U.K, Italy, and mainland China on interest in purchasing the iPhone 6 and iPhone 6 Plus, he raised his 12-month price target for Apple stock from $115 to $125. Here are some of Mlunovich's findings on users interested in switching from Android's most important manufacturer, Samsung, along with some other tidbits:

Apple stock: Is $125 likely?
Milunovich is right to to be more bullish on Apple stock after becoming more confident in the success of the iPhone. At about 56% of Apple's total revenue, the iPhone has the largest impact on the company's bottom line and its stock price. A large wave of Android switchers, therefore, could boost not only Apple's business, but also the stock.

How likely is it that Apple stock can hit $125 in 12 months? It's definitely possible. But Foolish investors aren't interested in speculating where a stock will go in such a short time frame. A better question is the value of Apple's stock today. Is the stock undervalued? 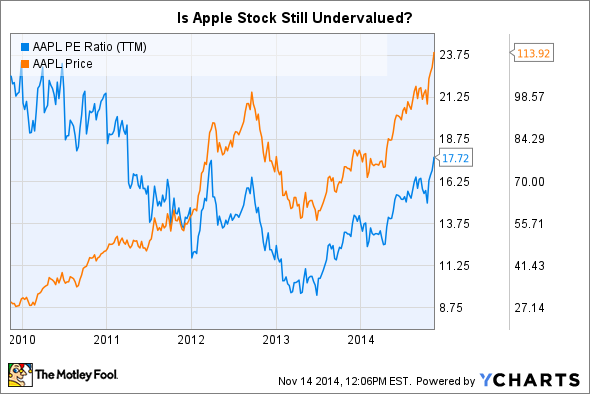 Even with Apple stock now trading at all-time highs, the company's price-to-earnings ratio of 18 is still somewhat conservative. In fact, Apple's P/E is lower then the S&P 500's ratio of 19. A large number of Android switchers, combined with continued high levels of loyalty from current iPhone owners, could prove the stock's current valuation to be conservative. And then, of course, there's the Apple Watch wild card. If this new product drives meaningful accretive revenue to Apple, then the stock could turn out to be a bargain at these levels.