J.C. Penney's turnaround has been larger than life up until the current quarter. Photo: Flickr via Mike Mozart

A shortfall in third quarter revenues for J.C. Penney (NYSE:JCP) last week caught some by surprise -- though really it shouldn't have -- but it didn't take away from the improving financial condition driving the department store chain.

Here are five nuggets of wisdom management imparted that should help inform your opinion of the retailer.

But relying upon just that one thing poses risks for J.C. Penney, too. In an attempt to block resellers from making bulk cosmetic purchases by deactivating their online accounts, Sephora was criticized for indiscriminately blocking people with Asian surnames who leveled charges of racism against the beauty supply company.

Makeup has been the one item that's consistently beautified J.C. Penney's operations. Photo: Flickr via shesarii

Although the charges aren't gaining much traction at the moment, perhaps because it's understood reselling is an industrywide problem that damages a brand and ultimately hurts consumers, it's the kind of blowback that could hit J.C. Penney, too, if it's too closely aligned to one outlet that drives its recovery.

2. Clearance merchandise contributed to results -- both good and bad
Because sales of clearance merchandise were I believe it should be "were" since we ignore the preposition phrase that comes before itdown almost 30% this quarter -- significantly lower when comparing it to last year's summer transitional goods on the floor -- it helped bolster J.C. Penney's profit margins.

Yet it's a double-edged sword because it was clearance merchandise from its spring collection and brands that it was rationalizing, particularly in the home and kids departments , that helped drive volume last year. Without that same tailwind, there was nothing to keep the pace going when warm fall weather caused customers to forgo purchasing autumn apparel.

3. It's performance was actually better than the competition
While Ullman didn't come out and say so, the fact that same-store sales were flat compared to last year, but both Macy's (NYSE:M) and Kohl's (NYSE:KSS) saw comps decline in the same period, indicates that despite being in a weaker financial position than either rival it's business is still holding up. 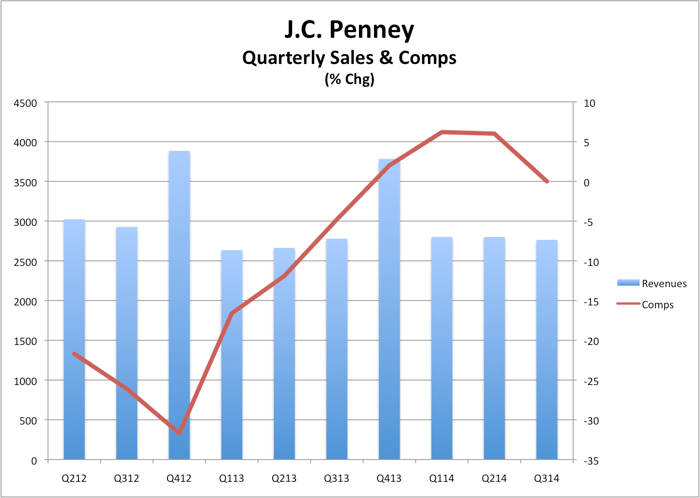 Not a pause that refreshes, but the breather in J.C. Penney's sales isn't a warning sign. Data: J.C. Penney quarterly SEC filings

So far over the first nine months of the year J.C. Penney's same store sales are up 4.3% compared to being down 11% last year, meaning despite a hiccup with the warm weather that wouldn't leave , customers are still responding to the changes it's made.

4. It's financial position continues to improve.
As with any corporate turnaround, J.C. Penney's finances remain an area of concern until it can consistently report a firm foundation underneath. But that doesn't mean it's not a steadily improving situation, so even though operating cash flow for the quarter was negative $320 million, that's significantly better than the $737 million use last year.

Further, units sold per transaction were off compared to last year (but see point above about impact of lower clearance volumes) and store traffic was still negative, it's continued to improve sequentially and the department store noted conversions, average transaction size, and average unit retail were all higher than they were last year.

A turnaround still on track
In short, J.C. Penney's third quarter performance shows it's still a work in progress, and though there were a few detours along the way the retailer continues to head in the right direction.

That could be why J.C. Penney stock dropped 8.5% the day after the earnings release, but bounced back almost 4% on Friday. The market realizes the good outweighs the bad and with some $2.1 billion in liquidity forecast for the end of the year along with still ending 2014 free cash flow positive, the recovery hasn't been derailed.