For years, Mozilla Firefox was a key strategic tool for Google (NASDAQ:GOOG), enjoying its spot as the default search provider. That helped boost Google's search market share during Firefox's peak and before Google launched Chrome in 2008.

That important default search spot comes at a cost, with Google comprising 90% of Mozilla's royalty revenue in 2012 (Mozilla did not release an annual report for 2013). That year Google paid the non-profit $274 million.

Back in 2011, Mozilla's contract for Google was about to expire. At the time, I wondered if Google would kill Firefox by withdrawing financial support, which would have made sense as Chrome had begun to take off by 2011 and Firefox could be considered unnecessary browser competition. Of course, it's possible that Microsoft (NASDAQ:MSFT) or Yahoo! (NASDAQ: YHOO) would step up to foot the bill and take over the default search spot. It became irrelevant when Mozilla and Google ended up renewing their contract for another 3 years through November 2014.

Well, it's now November 2014, and Yahoo! is taking over Firefox's default search engine in the U.S. next month.

Yahoo! is the new Google in more ways than one
Google has enjoyed the default search spot for a decade, but now it's Yahoo!'s turn. Mozilla CEO Chris Beard explained that when looking at its search partnerships, the foundation's main concern was preserving choice and independence. The search engines each presented competitive terms, but Beard says Yahoo! "stood out from the rest."

Yahoo! is even designing a new experience that looks cleaner, more modern, and ... more like Google. 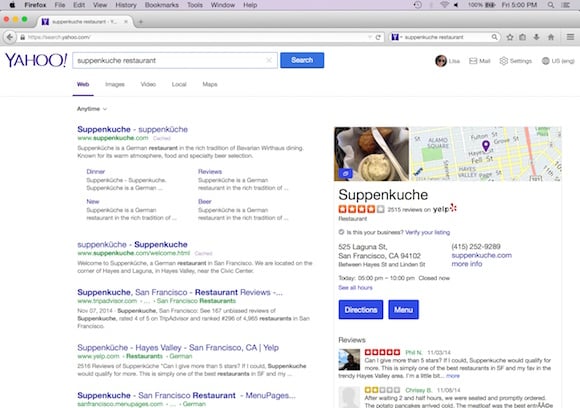 Mozilla is now broadening its default search strategy, and will tailor the default by country. For the U.S., that will be Yahoo!, but the strategy also makes sense considering how some local search engines dominate their home countries, such as Baidu in China or Yandex in Russia (each of which are the Firefox in their respective countries). The new approach will give Mozilla more flexibility as well as financial diversification of its royalty revenue streams.

Google will still facilitate certain features in Firefox, such as Safe Browsing and Geolocation, and will remain a pre-installed search option. Still, this is potentially a win for Yahoo! at Google's expense.

What happens next?
While it's not entirely clear if Yahoo! truly presented a compelling offer or if Google finally realized it wasn't really worth funding a competing browser. Perhaps it was a combination of both.

The importance of Firefox's default search spot is commensurate with its browser market share, which has been declining for years. It's not a coincidence that Chrome rose to popularity during this time.

Netmarketshare currently pegs Firefox's global browser share at 14%, down from over 20% two years ago. Chrome has climbed from 17% to 21% over the same time. Firefox still has a reputable slice of the market as the No. 3 browser, which means that Yahoo! scoring the default can help its position (even if Bing powers its search).

Last year, Bloomberg reported that Ex-Googler and Yahoo! CEO Marissa Mayer wanted to end the Microsoft partnership, and it seems likely that Mayer wants to regain control of Yahoo!'s search as soon as possible (the deal lasts through 2019). In the announcement, Mayer was quoted as saying search remains an "area of investment, opportunity, and growth" for the company.

Independent of who is powering the search behind the scenes, the deal could still help Yahoo! bolster its advertising businesses thanks to the expected increase in traffic. One thing's for certain though: this isn't good news for Google.