In case you haven't heard, oil prices are plummeting -- and OPEC is panicking ... and cutting production.

Earlier this month, both Brent and WTI crude oil prices hit new lows. While rebounding slightly, the current WTI price of less than $77 a barrel poses significant risks to the wealth of foreign nations -- OPEC in particular. What you may not know, though, is that the plunging price of oil also poses a significant threat to investors in U.S. defense stocks. 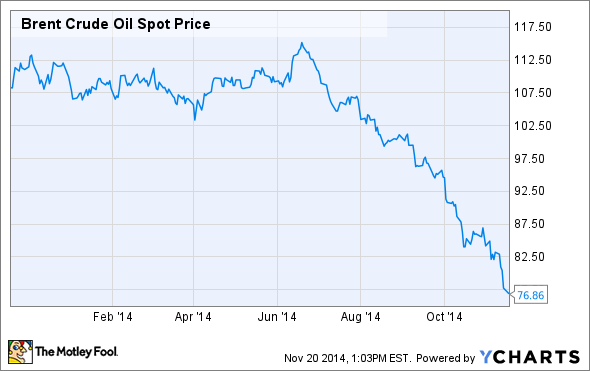 Now what does the plummeting price of oil portend for U.S. defense stocks? It works like this ...

What oil and defense stocks have in common

Now, some of these countries have a habit of taking the money they earn from this oil, and using it to finance certain unneighborly actions among their neighbors, or their own populations. (Think: Iran, Iraq, Libya -- and a bit farther off, Nigeria, Venezuela, and Russia).

The "problem" here is, that engaging in military adventurism abroad is a pricey business. To cite just one high profile example, Russia must presumed to have spent some millions of dollars on its invasion and annexation of Crimea earlier this year. The Moscow Times reports that subsidies to support Russia's newest province have already cost the country $1.5 billion, will cost $2.2 billion in annual subsidies going forward, and a further $5 billion for infrastructure repairs and upgrades. Add in the cost of economic sanctions, and the devastation of the Russian stock market that followed on the heels of the invasion, and some experts are suggesting that Russia's "victory" in Crimea could cost the nation as much as $200 billion.

That's a not-insubstantial sum, even for a nation as large, and as formerly wealthy, as oil-rich Russia. And here's the important part: If oil prices stay as low as they are right now for much longer, Russia will soon be starved for cash.

Trouble in Mr. Putin's paradise
According to The Economist, Russia requires a Brent crude oil price of approximately $100 a barrel in order to generate sufficient revenues from its economy, to pay its annual budget. But today's low Brent crude prices simply won't do the trick.

Russia's tanks run on oil -- so "lucky" for them oil is cheap, right? Photo: Wikimedia Commons.

Russia's not alone in suffering from the low price of oil. Take a look at a few of the breakeven points The Economist postulates for a few of the other "bad actors" around the globe:

What do all of these numbers have in common? They're way, way north of the $78 and change that a barrel of Brent crude oil currently sells for.

Returning to Russia as an example, the Russian defense ministry has publicly promised to invest $9 billion over the next six years, developing a home-grown drone aircraft industry for its military. Russia's also (still) trying to buy a pair of Mistral-class amphibious warships from France for $1.7 billion, and investing billions more in an effort to float 40 new and reconditioned warships. In total, Russian defense spending plans call for the investment of $576 billion to upgrade the nation's military through 2020.

Last month, however, Russian finance minister Anton Siluanov warned that these spending plans are looking less and less likely in light of budget pressures, and called upon the Kremlin to "reconsider the amount of resources that will be spent from the budget in order to make it more realistic."

What it means to investors
Expect similar realizations to spread around the globe, as the world's petro-states begin to discover that their petroleum isn't worth what it once was -- and doesn't buy as many tanks, fighter jets, and foreign insurgents as it once did. And this is where the interplay with U.S. defense contractors comes in.

Actions beget reactions -- as we've seen Russia's moves to build up its military presence in the melting Arctic Ocean spurred Canadian and American plans to beef up their cold-water navies. But if America's antagonists can't afford to be provocative anymore, then this must lessen our own need to spend big on defense to counter their actions -- and that would be bad news for America's defense contractors.

It could mean fewer of Lockheed Martin's (NYSE:LMT) F-35 fighter jets on Pentagon shopping lists, fewer of Huntington Ingalls' (NYSE:HII) and General Dynamics' (NYSE:GD) nuclear attack submarines, and fewer of ... well, everything built by companies dependent on a nervous nation to keep their revenues flowing.

That's good news for American taxpayers, and for advocates of "peace in our time." But for defense investors, it's good reason to worry.

The fast attack submarine USS Dallas (SSN-700). She runs on cheap nuclear power -- but her very existence may depend on expensive oil. Photo: U.S. Navy.