With the recent decline in oil and gas prices investors might be wondering if oil stocks are still a good area to invest in. This article explains why Magellan Midstream Partners (NYSE:MMP) is a great "pick and shovels" energy investment; one that promises to be both a great potential source of income in the decades to come, as well as one that may generate market beating total returns. 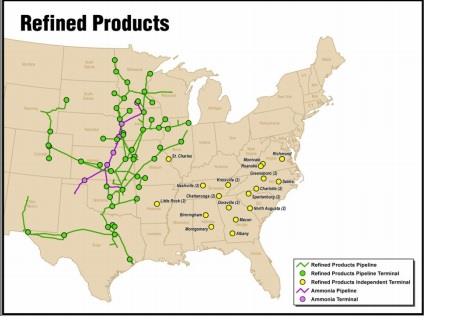 Magellan is the largest transporter of refined petroleum products in America, with 9,500 miles of pipelines, 55 terminals, and 42 million barrels worth of storage capacity.

Its extensive network gives it access to 50% of Americas refining capacity as well as many of the most important shale oil formations in the country such as the Permian Basin and Eagle Ford Shale, which it services with 1,600 miles of crude oil pipelines, and which combined are estimated to hold over 100 billion barrels of recoverable oil.

Magellan also carries biofuels such as ethanol and biodiesel as well as operates 1,100 miles of ammonia pipeline that serves the nation's fertilizer industry.

How Magellan makes money
The key to Magellan's prosperity in the face of the recent plunging energy costs is its business model, which is built upon a solid foundation of fee based transportation and storage income backed by long-term contracts. For example, 82% of Magellan's 2013 operating profits were fee based with only 18% having exposure to commodity prices and even there the MLP uses hedges to ensure predictability of cash flow.

For example, Magellan currently has $329 million in futures contracts hedging 5.6 million barrels worth of refined petroleum products, butane, and crude oil between April 2015 and November 2016.

In addition to the stability of long-term contracts, Magellan is able to increase revenue thanks to tariff increases on its pipelines that are tied to inflation. For example, in 2013, it raised its transportation fees 4.6%, with another 3.9% in 2014, and is expecting to raise them another 5% in 2015.

The first is that, like its competitor Enterprise Products Partners (NYSE:EPD), it has no general partner. In fact, Magellan is one of only five midstream MLPs to boast that status. Why is that important? Because it means no incentive distribution rights, or IDR, fees.

These grant a general partner, who operates the MLP, the right to up to 50% of marginal cash flows once the distribution rises above a pre-determined level. Without those fees, Magellan is free to retain that cash flow to grow distributions faster and invest in growth projects. As a result, Magellan benefits from industry leading profitability, which is its second competitive advantage.

Superb profitability courtesy of excellent management
As the above table shows, Magellan's management's disciplined growth approach has resulted in returns on invested capital that are double or even triple that of competitors like Enterprise Products Partners and Energy Transfer Partners (NYSE:ETP). In addition, its return on equity, which measures the amount of net income generated from the capital that investors provide to the partnership, is nearly five times the industry average.

Return on equity can be artificially inflated by high debt leverage and anytime you see a company or an MLP with ROE that much higher than the industry average, you should check to see if management is loading up on too much debt.

The fact that the return on assets, which measures net income over investable assets, both debt, and equity, is also much higher than its peers indicates that Magellan's management is efficiently using both funding sources to generate long-term unitholder wealth.

Low cost of capital means more profitable growth
Cost of capital is a very important concept for MLPs since partnerships pay out the majority of cash flows as distributions and thus must resort to heavy equity and debt issuances to fund growth. Think of the cost of capital as the hurdle rate that potential investments -- whether they are new projects or acquisitions -- must clear in order to be profitable and help grow the distribution. Lower costs of capital helps to increase the profitability of future projects as well as grow the potential pool of projects management can consider.

The following table shows Magellan's cost of capital, broken down into its constituent components, and compares it to what I consider as two other potentially great investments in the midstream MLP arena: Energy Transfer Partners, and Enterprise Products Partners.

Note that while it appears that Energy Transfer Partners has a much lower cost of capital than both Magellan and Enterprise, that is only because of its historically high use of debt, which has a much cheaper cost than equity. Energy Transfer likely won't be able to continue this because it risks losing its investment grade credit rating -- which would raise its debt borrowing costs -- with its Debt/EBITDA at 5.95. Credit rating agencies typically like to see this ratio no higher than 4.5 and Energy Transfer Partners sits higher than the industry average of 5.38.

Over the last five years, Magellan Midstream has resorted to far less equity offerings and turned to cheaper debt offerings to fund growth, thus greatly decreasing its WACC. This is partially due to the fact that Magellan is one of only five midstream MLPs without a general partner. Thus it lacks the incentive distribution fees that can divert up to 50% of marginal cash flow to the general partner and increase the need for a MLP to raise funds from debt and equity markets.

Another way to confirm Magellan's efficient and responsible use of debt is to compare its balance sheet against the industry average.

As this table shows, Magellan is very conservative in its use of debt, with a Debt/EBITDA ratio nearly 50% lower than its industry peers. This is one reason Magellan's debt is rated BBB+, which is the highest debt rating among its peers.

A great credit rating doesn't just help Magellan sell bonds at attractive rates, but also gives it access to very cheap short-term capital as well. For example, Magellan has a $1 billion revolving credit facility from which it can borrow at 1%-1.75% above LIBOR , which at today's rates means Magellan can borrow money for terms of one month to one year at rates between 1.16% and 2.31%, further lowering its borrowing costs and overall cost of capital.

One of the best distribution growth records in the industry 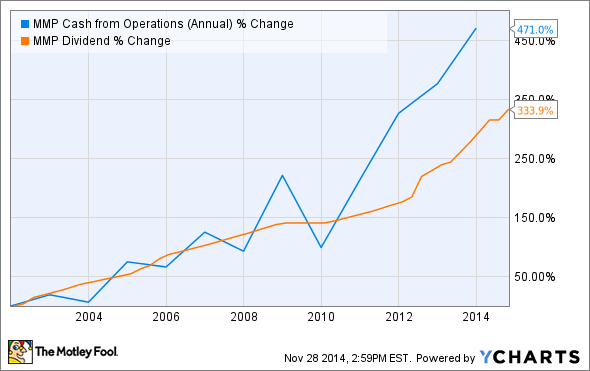 Magellan's competitive advantages have allowed it to achieve phenomenal cash flow growth and made it one of the best distribution growers in the MLP industry. Management is currently providing guidance for 20% growth in 2014 and 15% in 2015, and as the table below shows, analysts are expecting this impressive distribution growth rate to continue in the years to come.

Such consistent and strong distribution growth has resulted in market and peer-crushing total returns over the years -- a trend that I think is likely to continue although perhaps not at such a blistering rate. 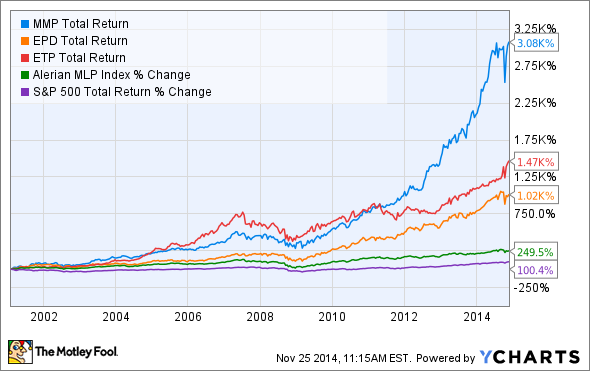 Bottom line: Short-term oil plunge is no threat to Magellan's future
Despite the sharp decline in recent energy prices, Magellan Midstream Partners' robust and diversified system of refined fuel, crude oil, biofuel, and ammonia pipelines remains a valuable asset that is likely to deliver strong and consistent income growth, both for the MLP and long-term investors. Thanks to management's strong track record of superb capital management and disciplined growth, I am confident that long-term investors can likely expect market beating total returns over the coming decades.