Perhaps Intel's (NASDAQ:INTC) most exciting business is its data-center business. With revenue growth expected to be in the double-digit percentage range through 2018, and with operating margins of approximately 50%, Intel's data center group continues to fire on all cylinders.

Interestingly enough, while Intel's data center group is expected to grow by 16% this year, the unit growth is likely to be significantly lower than that. For example, in the company's most recent quarter, it reported that the unit shipments in its data center grew just 6% year over year, while average selling prices rocketed up 9%.

Intel's Diane Bryant, who runs Intel's data center group, gave a particularly helpful presentation at the company's investor meeting explaining what seems to be driving this. I think that all Intel investors, and potential Intel investors, should understand the dynamics at play here.

Data-center customers aren't quite like customers in the client space. While customers looking to buy devices like PCs, tablets, and TVs might be chiefly concerned with the initial acquisition costs of a product, the folks in charge of making purchasing decisions in data centers care more about the total cost of ownership or TCO.

To help illustrate this point, I'd like the direct your attention to the following slide from Bryant's presentation: 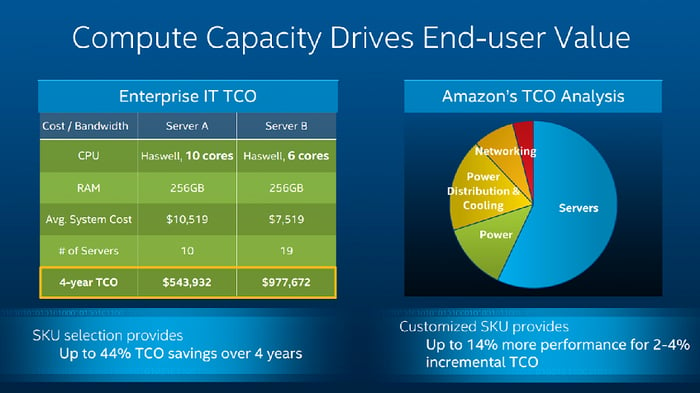 In this slide, Intel shows the average system cost of a server with a 10-core Haswell server chip on the left and a six-core Haswell server chip on the right. The slide shows that in order to get roughly the same compute power as 10 servers, each with a 10-core Haswell, a data center would need 19 servers with cheaper six-core Haswell processors to do the same job. Those servers with the cheaper Haswell would each be cheaper to acquire, but from a straight up acquisition cost, going with 19 slower systems at $7,519 each is actually more expensive (upfront cost of $142,861) than buying 10 of the more expensive servers (upfront cost of $105,190) to do the same job.

Now, keep in mind that the "cost" of running a server doesn't end with how much it costs to buy the hardware. In the right hand side of the slide above, Intel shows an analysis done by Amazon to break out the costs of running a server. While hardware costs are a big part of it, power consumption is a significant factor, networking is a big factor, and power distribution and cooling costs quite a bit, too.

In light of the fact that the nonhardware costs per server take up a big chunk of the total cost of ownership of a server, it should make sense that running 19 weaker servers is more expensive than running 10 more expensive but more capable servers over the long haul.

But wait, doesn't Intel sell fewer chips?
In scenario A above, Intel sells ten 10-core processors but in scenario B, Intel sells 19 six-core processors -- meaning that the situation that makes the most sense for the customer leads to lower chip volumes for Intel. Of course, Intel understands the TCO equation well, and as a result will price its higher-core count chips higher on a per-core basis than it will its lower core count chips to make sure it ultimately gets paid for the TCO savings it's delivering.

To illustrate this point, I have included a sampling of Intel's latest Xeon models in the table below, listing model number, core count, list price (caveat: data centers buying in bulk do not pay "sticker price," but the table should illustrate relative pricing between the models), and price per core:

When considering any TCO equation, keep in mind that the lower core count chips tend to use less power than the higher core count chips. However, the fundamental point is clear: Intel charges far more per core for larger core count configurations precisely because Intel knows that the TCO savings of using said high core count part will far outweigh the processor price to the buyer.