For at least a few years, General Electric (NYSE:GE)had shied away from the merger and acquisition spotlight. Small, "bolt-on" deals became the status quo for CEO Jeff Immelt and this revamped American manufacturer. But this summer, all of that changed.

Backed by a balance sheet flush with cash, GE went "elephant hunting," as Warren Buffet might say. The Schenectady, New York-based company outmaneuvered its German industrial rival Siemens to scoop up the energy business of France's Alstom for a cool $13.5 billion.

Now that six months have passed, is that price tag looking like a bargain? According to GE, it most definitely is. Steve Bolze, president of GE's power and water division, recently stated the following about the merits of the deal from his perspective: "We like it more today than the day we announced it." With the Alstom integration, Bolze noted, "[W]e'll be bigger in Europe and bigger all over the world."

The key words there, at least given the current economics of power generation, are "all over the world." Europe is a backwater for natural gas power generation today. But more emergent economies like China and India will require more energy and more capacity from power plants for years to come.

And there's no clearer picture of how this market will take shape than the chart the U.S. Energy Information Administration uses to forecast demand to 2040. Take a close look at where the electrical generation market is headed over the decades to come. Signs point to natural gas stealing the show: 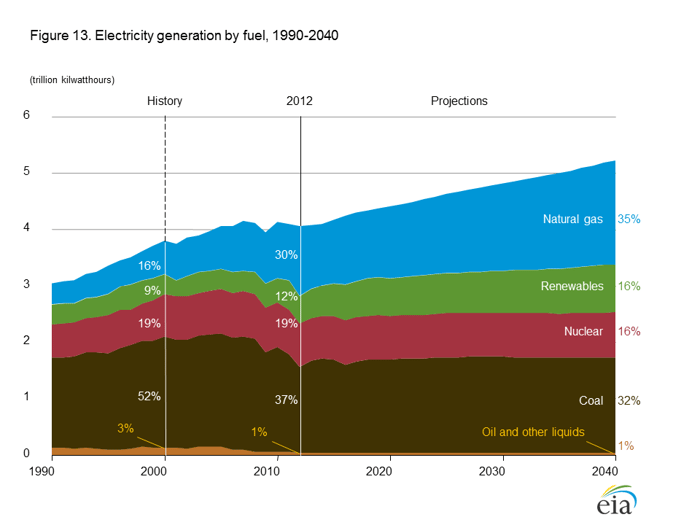 For the first time in the electrical power industry's history, natural gas is becoming the go-to fuel source, gradually replacing the "black gold" of yesteryear. And whether that's a reference to coal or oil, it's clear which fuel is top of mind in the industry these days. Consider the following comment from Laszlo Varro, the head of gas, coal, and power at the International Energy Agency, who told Bloomberg, "Investment in electricity is bigger than oil, it will be huge in the coming 20 years."

As natural gas emerges as a cheap, cleaner-burning alternative, the companies that provide the infrastructure, expertise, and global reach for gas-powered electricity will reap the benefits. This brings us full circle back to GE's significant investment in Alstom's power-related businesses.

Looking 10 years down the road, GE believes natural gas capacity additions will account for $1.25 trillion in investments in this field. This is because 25% of the $5 trillion in power expansion is expected to be dedicated to natural gas, versus 23% for coal.

In that context, the $13.5 billion investment in Alstom could start to pay dividends relatively quickly for GE. Today, the combined products and services within GE's power generation business account for roughly $12 billion in revenue of the total $25 billion in the power and water segment. The addition of Alstom could accomplish three key things for power and water, which is expected to grow sales more than 10% in 2014:

What Alstom does is increase GE's global reach in the power generation field, while also increasing its scope within the power plants themselves. The latter will help bolster revenue, while the former -- a form of vertical integration -- provides a more comprehensive offering for customers, and therefore potentially greater pricing muscle.

Given the high expectations for the future of gas power, it looks like GE picked the right time to pull the trigger on the Alstom deal. It came with a hefty price tag, but it coincides with growth in demand for natural gas, GE's engineering expertise, and the complementary product-and-services business model within power generation.

As Immelt continues to shed other non-core businesses within the company, don't be surprised if he uses some cash to pick up another target in the natural gas arena. Though next time, it probably won't be elephant-size.