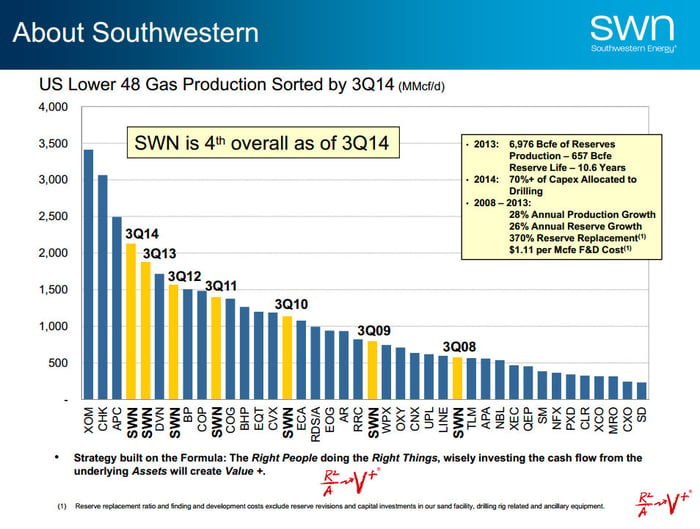 As that slide notes, the company only trailed ExxonMobil (NYSE:XOM), Chesapeake Energy (OTC:CHKA.Q), and Apache (NASDAQ:APA) on the leaderboard of the top natural gas producers in the lower 48 states.

However, a lot has changed since the third quarter ended as the company announced a transformative $5.4 billion deal with Chesapeake Energy for its southern Marcellus shale assets, as well as an important $300 million transaction with WPX Energy (NYSE:WPX) for some of its assets in the Marcellus. These deals, when combined with the company's already strong growth prospects, are turning Southwestern Energy into a top natural gas stock as it could soon emerge as America's natural gas leader.

Growing while others decline

This has opened the door for Southwestern Energy to begin to emerge as America's new natural gas growth leader. The company has aggressively grown its natural gas production as this year it spent $2.4 billion to push its production up 16%. The company has also aggressively acquired natural gas assets from rivals. In the Chesapeake Energy deal, for example, it added a third growth asset to its natural gas portfolio to go along with the Fayetteville shale as well as the northern Marcellus shale. Going forward each asset is expected to produce a third of the company's future production with the southern Marcellus acreage from Chesapeake expected to provide the company with about two decades worth of drilling inventory. 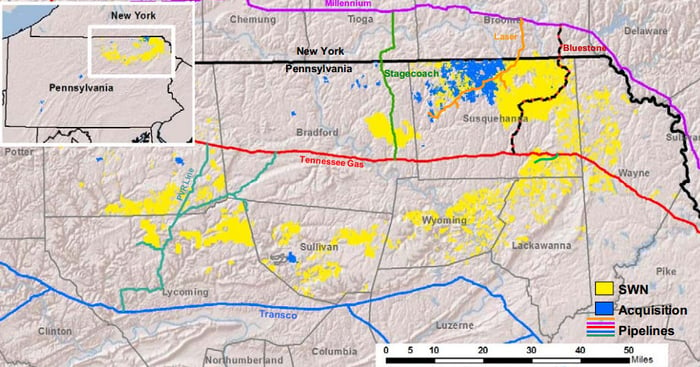 The other important aspect of that deal was that it provided the company with much needed natural gas transportation volume thanks to the pipeline capacity WPX Energy handed over as part of that deal. That pipeline capacity is for 260 million cubic feet per day, however, it has ample spare capacity because the WPX Energy assets are currently only producing 50 million cubic feet per day of natural gas. That's important because the one thing slowing down development of shale plays has been the lack of takeaway capacity from pipelines. So, this acquisition not only bolsters Southwestern's current production but it opens wider the door for future growth by providing additional drilling locations and unhindered takeaway capacity.

Investor takeaway
Southwestern Energy took the contrarian bet that natural gas still had a bright future in America. Because of that view it has aggressively grown its natural gas production both organically and through acquisitions. It's now beginning to emerge as a top natural gas stock as its rivals have turned all of their attention to oil, leaving most competitors flatfooted now that oil has fallen from grace.