Airline stocks have been on the rise lately as the recent plunge in oil prices will provide huge cost savings this fall and throughout 2015. Jet fuel is the No. 1 expense for most airlines, and jet fuel costs have dropped more than 20% in the last three months, with further declines likely if crude oil remains near $70 per barrel. 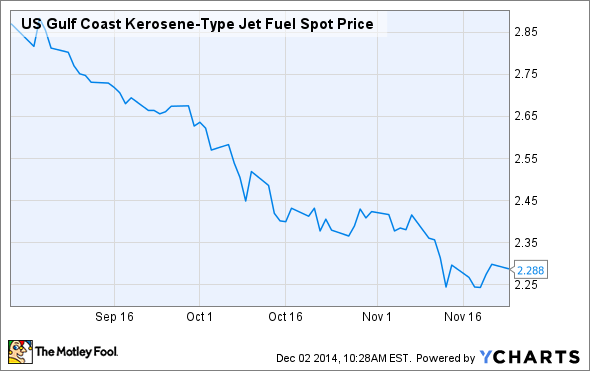 Not surprisingly, investors have noticed the sharp drop in jet fuel prices and have sent airline shares soaring. However, not every airline has made big stock price gains. One notable laggard has been Mexican ultra-low-cost carrier Volaris (NYSE:VLRS) -- which could make it the best deal left among airline stocks.

Airline stocks take off
In October, I highlighted three airlines that would be likely to benefit the most from falling fuel prices. In the last seven weeks, two of those three airlines -- Hawaiian Holdings and JetBlue Airways -- have achieved strong stock price gains. Only Volaris has been left behind. 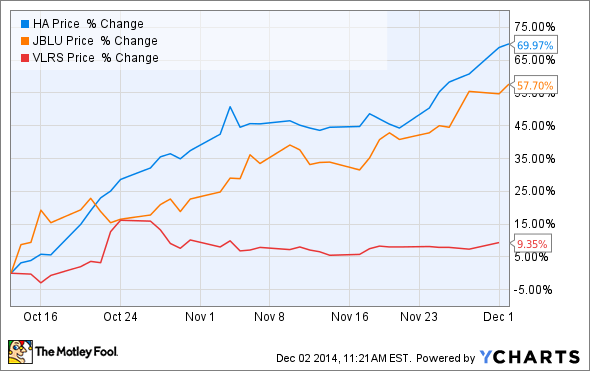 Since Oct. 13 (when my previous article was published), Hawaiian Holdings stock has jumped 68%. JetBlue has not been far behind, with a 57% gain in that time frame. By contrast, Volaris' shares have risen less than 10%.

Volaris' key metrics are turning
Investors' lack of enthusiasm for Volaris stock is understandable given that the company has lost money year-to-date. Volaris' unit revenue came under severe pressure beginning in late 2013 as Mexican airlines became too aggressive in their growth plans. However, this pressure has started to moderate.

In Q4 2013, total unit revenue plunged 16.7% for Volaris. While the company's strategy entails reducing airfares to stimulate growth in the Mexican air-travel market, this drop in unit revenue was too severe to offset through unit cost improvement. This caused Volaris to swing to a loss after earning a solid profit in Q4 2012.

So far, trends look good for stronger unit revenue growth in Q4. First, Volaris faces much easier comparisons, as it is now going up against the 16.7% decline registered last fall.

Second, Volaris reported that load factor (the percentage of seats filled with paying customers) rose from 76.8% in October 2013 to 82% in October 2014 as Volaris implemented seasonal capacity cuts. Both data points bode well for high single-digit or even double-digit unit revenue growth this quarter.

Fuel is just another tailwind
Oil prices are notoriously volatile. Thus, investors should not load up on the shares of every airline just because oil prices have slumped recently.

However, the prospect of lower fuel prices does make this a good time to look for bargains in the airline industry. The key is that investors need to look for airlines that have more going for them than just a drop in their fuel costs.

Volaris has been spending nearly 40% of its revenue on jet fuel recently. As a result, the drop in jet fuel prices could drive 6 to 8 percentage points of margin growth in 2015. But an equally important part of the case for Volaris is the budding recovery in unit revenue as demand catches up to supply.

Volaris is following a long-term strategy of reducing its unit costs in order to stimulate demand for air travel in the price-sensitive Mexican market at prices that nobody else can match. It has hit some bumps in the past year, and it will inevitably hit more at some point in the future. It's hard to grow supply at exactly the rate that demand is rising.

However, the key point is that in the long run, Volaris is well positioned to generate enough revenue to cover its low costs and earn a solid profit margin. The recent drop in fuel prices will just speed up Volaris' recovery by driving rapid margin expansion over the next 12 months. That will help Volaris stock catch up to its peers.