Whenever there's a major event in the energy market, like the recent slide in oil prices, it's almost guaranteed that some companies will get tied up in chaos even when they don't necessarily deserve to be there. Today, that event is OPEC deciding to hold production at 30 million barrels, resulting in oil prices dropping to below $75 a barrel.

One company that has undeservedly been swept up in this decline has been Cheniere Energy (NYSEMKT:LNG) and its subsidiary, Cheniere Energy Partners (NYSEMKT:CQP). Let's look at why falling oil prices shouldn't impact the company that much, and what investors should really be looking for when evaluating these companies. 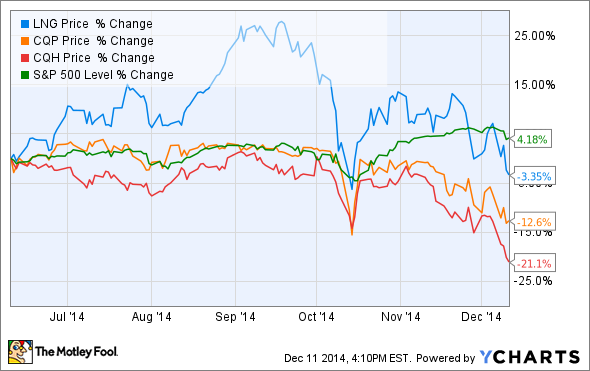 Dragged down by oil for what reason exactly?
Seeing a company drop 10%-15% isn't exactly the biggest news story out there. We see share prices climb and drop that much in a single day for sometimes no reason at all other than a few investors getting out on the wrong side of the bed. In this case, though, a large part of the drop in Cheniere just happens to coincide with the drop in oil prices we have seen during the past several months. Perhaps it's just happenstance that these two events have occurred at the same time; if people are selling shares of Cheniere because of oil prices, then they apparently have no idea what the drivers of this business are.

Aside from the obvious point that Cheniere is a company looking to export liquefied natural gas from the U.S., and that natural gas prices and oil prices in the U.S. have very little correlation, the deeper point is that the future revenue of this company is extremely removed from actual commodity prices. Take a look at the contract structure for the company in this investor presentation slide. 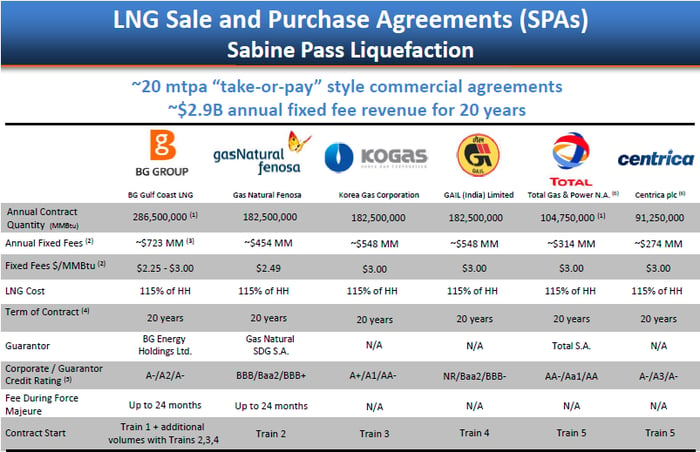 Of the 18 or so million tons per year that Cheniere's first LNG terminal -- Sabine Pass -- plans to bring online in the next year, more than 88% percent of its export capacity is tied up in 20-year take-or-pay contracts that guarantee annual revenue of $2.9 billion, rain or shine. On top of that, the only part of these contracts that are tied to natural gas prices is a 15% charge on top of Henry Hub spot prices.

Based on the volume commitments listed, and the current price of natural gas, that would amount to around $630 million annually. So the part of the business that is influenced by commodity prices will make up less than 20% of the overall revenue stream of the company.

Yes, there is some room at the margins for Cheniere to suffer with lower commodity prices related to the amount of LNG that will be sold in the spot market instead of under these contracts and from low Henry Hub spot prices. However, the revenue stream is well shielded from natural gas prices, and has almost zero correlation to oil prices.

The long-term link to oil prices
If you really, really want to stretch, the one way that you might be able to link the success of Cheniere to oil prices isn't based on what it has contracted out already; it's what it has yet to contract out from the expansion of its Sabine Pass facility and its Corpus Christi facility. Currently, Cheniere's Sabine Pass expansion facility is 41% contracted out similar to the ones listed above, and 57% contracted for its Corpus Christi facility. Ideally, for a processing facility, these solid commitments are a little low. Chevron estimates that its own LNG facilities need to have at least 85% long-term contracts in place to make it an economical project.

The rest of the world indexes the price of natural gas to the price of oil. The U.S. doesn't. So, as oil prices slide, it can be more appealing to buy LNG from somewhere outside the U.S. This could make Cheniere's fight for new contracts more challenging. 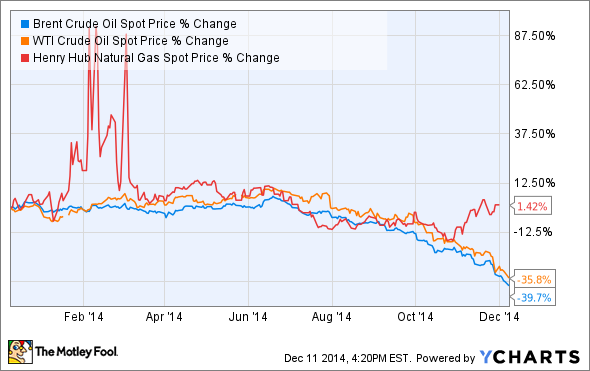 I have one problem with this theory, though. The Sabine Pass expansion and the Corpus Christi facilities aren't slated to come online until 2018-2019, so a bet on cheap oil eating into Cheniere's prospects means that cheap oil is here to stay for the next four to five years. I'm just not ready to make that kind of bet on oil prices.

What a Fool believes
Cheniere Energy has been a pretty speculative stock to own, and it will remain that way until it gets one of its LNG export facilities up and running. However, the company is almost completely shielded from the price of oil, and anyone who sells shares of this company because of cheap oil has a complete misunderstanding of the business, and probably shouldn't own it in the first place. If you're looking for an energy company that's well protected from the volatility of oil and gas prices, or if you've been looking for a time to buy shares of Cheniere, then this is one of the better opportunities you'll get.