Kinder Morgan's (NYSE:KMI) stock has been largely insulted from the downdraft in the oil markets. Unlike most other energy related companies, its stock is actually up 19% on the year. 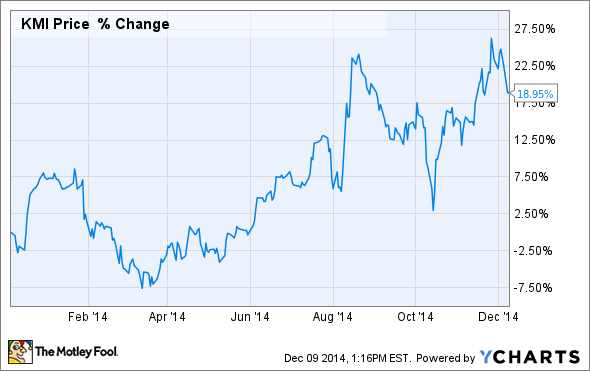 This solid perfomance is despite the fact that Kinder Morgan is actually one of the largest oil producers in Texas. However, investors have correctly looked past the company's oil business to realize that it is most strongly positioned to profit from the natural gas megatrend.

As we see in the following slide, oil production represents just a small sliver of Kinder Morgan's $8 billion in segment earnings. 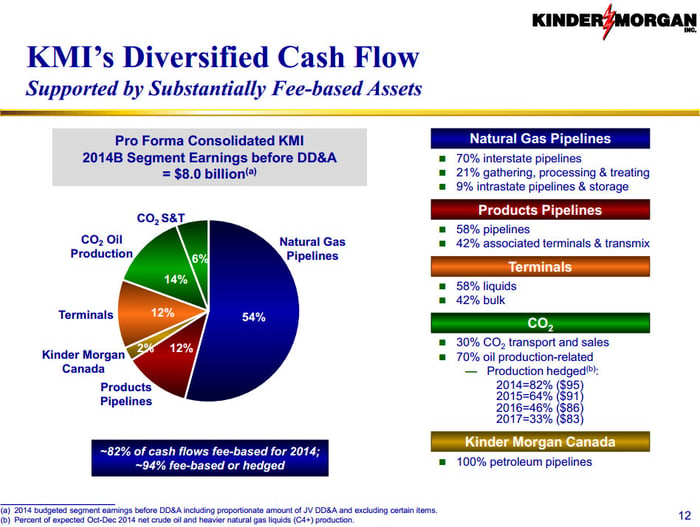 More importantly, as that slide points out the company's business is very well supported by fee-based assets, with more than half of its earnings coming from natural gas pipelines. That's key because natural gas, and not oil, is the segment that Kinder Morgan is focused on profiting from in the future.

The natural gas boom
Kinder Morgan sees a very bright future in natural gas. Not only is natural gas production expected to steadily grow over the next decade, but so is demand. It's this demand in particular that Kinder Morgan is positioning to serve because it has the assets in place to expand as demand grows. We see that in the following map with the company's very strong network in the Gulf Coast. 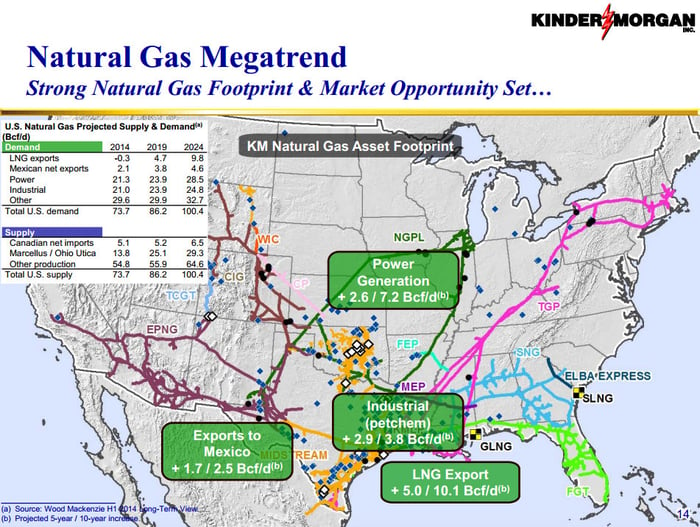 This pipeline network is exceptionally well positioned to supply natural gas to petrochemical plants as well as for exports both to Mexico and the rest of the world via LNG. In fact, just this week the company signed a 15-year transportation and storage agreement to serve a new LNG plant on the Gulf Coast. The project will require the company to invest $187 million to support the expansion of one of its pipelines so it can supply gas to meet its customer's needs.

That expansion project is just one example that points out that the company's current pipeline capacity alone won't be enough to meet demand growth. This provides it with a substantial opportunity to invest in new pipelines as it expands its capacity, which will, in turn, expand its cash flow. The opportunity is immense as it is estimated that through 2035 a staggering $641 billion will need to be spent by midstream companies like Kinder Morgan on new pipeline capacity. For perspective, that's about $29 billion per year, which is $11 billion more than midstream companies have spent on average over the past five years. Talk about a megatrend!

Kinder Morgan's current natural gas footprint has the company poised to capture an outsized share of these opportunities. The company already transports about a third of the natural gas in the country, and it isn't expected to willingly give up any market share. Instead, it looks to grow its natural gas capacity by signing up additional long-term contracts with customers. In fact, in the past year the company has signed firm, or pending, contracts totaling 6.4 billion cubic feet per day of natural gas transportation capacity. That represents almost 10% of America's average daily supplies this year.

Investor takeaway
There is a clear trend in America toward using more natural gas. Meanwhile, what gas we don't use in the U.S. will be used elsewhere in the world as exports ramp up. It's a megatrend if there ever was one and Kinder Morgan is right in the thick of it.