The situation is not looking much better for RadioShack. Photo: Flickr via Jason Cartwright.

The end is nigh. Picture some dude with a long gray beard wearing sackcloth and perpetually carrying a sign warning of end times. That's me predicting doom for RadioShack (NYSE: RSH).

A few years ago I asked whether the electronic gadgets retailer was facing its last Christmas. Even though it would go on to earn $205 million in net profits for the year way back then in 2009, its customer base was already eroding at an alarming rate, sales were steadily falling, and its business model seemed irrelevant to consumers looking for today's consumer electronics.

RadioShack has survived longer than I thought it would, but now it really does seem like it won't be lighting a Yule log this time next year. 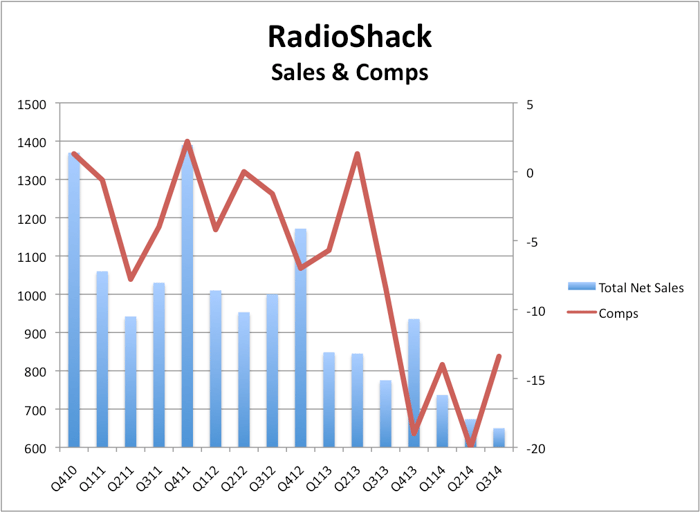 RadioShack's sales have withered away as its consumer base eroded. Data: RadioShack quarterly SEC filings.

Worsening conditions forced RadioShack to announce plans to slash $385 million from operations, or "annualized earnings enhancements," as the retailer terms them.

Cost-cutting measures are planned as follows:

That's all well and good, but consider that store closings savings. RadioShack admits it first needs approval from its lenders before shuttering those locations and selling assets, and that might not be easy.

Earlier this year, the retailer proposed closing up to 1,100 stores, only to have lenders jam on the brakes. Their covenants with Radio Shack would limit store closures to 200 locations, and they haven't wavered in preventing the retailer from going further because they fear they won't get paid. Close too many stores and revenue falls through the floor.

RadioShack wants to close more than 1,000 stores, but is facing pushback from its lenders. Photo: Flickr via w.marsh.

RadioShack has over 4,000 stores stretched across the U.S. and Mexico, and has closed 175 of them so far this year. As CEO Joe Magnacca acknowledged during Thursday's earnings conference call, "We faced significant challenges including from our term-loan lenders."

That's a bit of an understatement. This past October, as the electronics retailer reeled and headed toward certain death as it ran out of cash, hedge fund Standard General stepped in to refinance RadioShack's $535 million credit facility in exchange for authorization to convert $120 million worth into equity if the retailer stayed afloat through January. That would amount to as much as 25% of the company.

The deal ensured RadioShack would at least survive through Christmas. Except that those "term-loan lenders" Magnacca referred to declared on Dec. 1 that the refinancing put it in default on the loans, and they demanded immediate repayment.

Salus Capital Partners and Cerberus Capital Management had loaned the retailer $250 million last year that kept it going at the time. But loan covenants stipulated RadioShack could not borrow money from an "affiliate," or someone with a greater than 10% stake in the business. Standard General owns less than 10%, but the hedge funds objected to the amount of equity it would get and declared Radio Shack in default.

The retailer is seeking forbearance from Salus and Cereberus that they won't act on the default, but it's clear the company is in deep trouble.

If they can't come to an agreement, RadioShack will remain mired in a legal battle. If all the lenders somehow end up on the same page, the company still faces all the troubles it had before the squabbles. There doesn't seem to be any good way out for the electronics dealer, and the lenders look like they're simply jockeying for position to protect their interests and ensure they can get whatever assets are left at the end.

The only thing any remaining investors in RadioShack will receive this Christmas is a lump of coal.

Is This RadioShack's Last Christmas? @themotleyfool #stocks Next Article
Current