The holiday season lasts from about the fourth week of November until Jan. 1. All sorts of changes take place during that period, from the Grinch's heart growing three sizes to you and your neighbors adding hundreds, if not thousands, of tiny lightbulbs to your home's usual decor. While both are wonderful holiday traditions, the latter can cost you a lot of green and, believe it or not, push the energy grid to its extremes.

What's a few extra lights...
So what does it cost to illuminate your holiday with little colored lights? The answer depends on the type of lights you use. According to a handy online calculator from Dominion Resources' (NYSE:D) North Carolina Power subsidiary, four 25-bulb, 125-watt strings of traditional Christmas lights will cost roughly $13 to run for eight hours a day for a month. That's just 100 lights! If you use smaller bulbs, those that use just 50 watts per string, 100 lights will cost you only $1.20 for a month at eight hours a day. 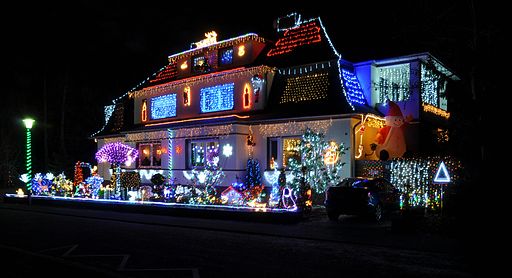 Switch to a string of 100 LED lights and the cost drops down to about $0.15 for the month. Wow! But, clearly, few people will be satisfied with just 100 light bulbs on Christmas. I have a tiny little fake tree, which alone has been loaded with 200 bulbs. (For the record, they are LEDs and they dance in patterns -- it's pretty cool.) I don't do any outside lighting because I live in a co-op. But my co-op puts on a little light show, covering our shrubs and trees with lights. There are probably 2,000 bulbs involved, at least.

Save, save, save electricity
So, yes, you can save big money by shifting to LED lights. If you use the big bulbs, the savings alone will probably pay for buying new LED bulbs. That said, what you are really saving isn't money, it's electricity. And that's why your utility would love (yes, love) to see you make the switch. CMS Energy's (NYSE:CMS) consumers energy division actually issued a news release just this month highlighting the savings that can accrue to Michigan residents making the LED investment.

However, that release also brings up the bigger problem for utilities over the holidays: "Consumers Energy estimates that approximately 6 percent of the electric use by its residential and commercial customers can be attributed to the holiday season. Electric demand in December increases from businesses and shopping malls, which install special lighting displays and extend shopping hours, as well as for residential holiday lights."

But you aren't the only house that will put these bad boys up. In fact, in 2000, when California was dealing with a constrained electricity market, utilities and state regulators actually asked residents to wait until at least 7 p.m. to turn on the Christmas lights. Why 7 p.m.? Because electricity use peaks in the early evening and then trickles off as the night goes on.

That means electricity is most in demand, and most expensive, between about 5 p.m. and 7 p.m. California was obviously trying to lighten the load during its peak usage period to avoid blackouts. Imagine that, your Christmas tree could have caused a blackout in California in 2000!

Buddy, can you save a watt?
While there's less risk of that today, the increased demand for electricity from your lights (and those of everyone else who puts them up) hits utilities at the worst possible time. Which is why your utility would be greatly appreciative if you cut the nightly pull from four-kilowatt hours to just 0.04 by switching to a string of 100 LED bulbs.

So do yourself, and your local utility, a favor this holiday season, and consider tossing your old Christmas lights and replacing them with LEDs. In fact, you might find good deals as retailers try to put holiday merchandise on discount. You'll save money and put less strain on the grid all at the same time.